As the 2019 general elections draw closer, so is the anxious calls for the coalition of young candidates appears to be growing louder. But in all of these agitations, some not so few electorates seem to be getting something wrong. And we seem to be getting it wrong almost totally. All of the sufferings and unprecedented economic hardships that has so far been imposed on Nigerians for the past 58 years of “Independence” and 19 years of PDP/APC misrule has very little to do with the age of the gangsters who have fraudulently imposed themselves in the position of power. Governor Yaya Bello of Kogi state is no doubt the youngest governor in Nigeria. But it is also not surprising that he is the worst performing governor. The emergence of Emanuel Macron in France was largely celebrated by proponents of the #NotTooYoungToRun. But has the youthfulness of Emanuel Macron translated to a French country that works for even the youths who brought him in? Events currently unfolding in France have given us the answer. The Yellow vest protest; unarguably one of the biggest movement in the history of France and largely dominated by young people currently threatens to unseat 40 year old Pro-Establishment Macron. We have also seen the way the biggest organization of the Nigerian Youth, NANS, is being led as though they are leading a criminal gang of drug cartels.

Without much argument, we can all agree to the fact that the years of military rule was largely dominated by youthful leadership. But have we recovered from the unquantifiable havoc wrecked by these draconian regimes? The answer is a capital NO! It was these political abominations, the likes of Sowore, Falana, Fawehinmi, Soyinka, spent their early years fighting. They were the military cult that held to ransom and distributed among their friends, scores of publicly owned properties. They ran our economy to the direction of their Switzerland Bank account and sold our tertiary institutions to the greedy whims of privatization and commercialization. Some of these disgraceful characters, the likes of Obasanjo and Buhari came back in civilian regalia. They were not satisfied with enslaving our parents as military dictators; they just had to enslave us as well. And as the 2019 elections draws closer, they had to hand the baton of oppression to their protégées who apparently constitute themselves as majority among the ranks of younger candidates who have presented themselves as Presidential candidates in this election. And you can tell who they are by their utterances and programs? As the Bible says, by their fruit, you shall know them.

Is Omoyele Sowore, the Presidential candidate of the Africa Action Congress different from his peers in this race? The answer is a YES. He is completely different on the basis of programs, pedigree, history and astounding bravery. While the likes of Moghalu, Durotoye, Dr. Oby and their likes are keen and unrepentant in the resolve to continue the imposition of anti-poor programs of privatization/commercialization of publicly owned properties, which apparently are the legacies of the old guards, Omoyele Sowore on the other hand is resolved to do the exact opposite. Even our constitution despite its limitations posited in chapter 2, section 16, subsection 2c that “the economic system is not operated in a manner as to permit the concentration of wealth or the means of production and exchange in the hands of few individuals or of a group. Neoliberal programs in the form of privatization, commercialization and deregulation are outright contradiction of the position of the above section of the constitution. Just like they have always disregarded the constitution, Nigeria’s past leaders have consciously erred on this part of the law. They have sold almost all publicly owned properties to their friends and have also made education an exclusive preserve of the rich.

The likes of Moghalu, Durotoye and Oby has said it on various debate platforms that they intend to run a private sector driven economy; An economy that places public properties in private hands. Not surprisingly, proponents of privatization are fond of justifying these wretched policies on the grounds that a public sector driven economy is bound to be corrupt. To say you are the President of a country and still say the government is incapable of managing its properties is as good as saying you are incompetent as a President. Such people/Presidents should be forced to resign rather than allowing them to conveniently sell our properties to themselves through proxies, their families, party chieftains and cronies.

The thing about privatization isn’t about the incapability of managing an effective public sector economy that can guarantee equal economic opportunities for all, but that this people intend to use the nation’s economy and public property to reward “Godfathers”, themselves, families, friends and party chieftains. This is the kind of economy Moghalu, Durotoye and Oby intends to run. An economy that is out to advance Nigeria from being the poverty capital of the world to being the poverty capital of the Universe. It is what Fela Anikulapo Kuti calls “Double wahala for deady body”. It is no wonder even Atiku of the PDP isn’t saying anything different. Just like Moghalu and his peers, Atiku has also come out openly and shamelessly to say he will sell NNPC and other publicly owned properties to his friends. Even Ben Bruce, who is a point man in the Atiku’s campaign, has also said the solution to ending ASUU strike isn’t battling the menace of education underfunding but privatization of tertiary institutions; a policy that would take school fees to the tune of 700 thousand at the minimum.

Omoyele Sowore, an activist, Publisher of Sahara Reporters and Presidential candidate of the African Action Congress (AAC) has said that he would not only reverse all public properties that have been fraudulently awarded to politicians, friends, and their families, he would also put a total end to the era of privatization and commercialization of publicly owned properties. He has said he would pay a 100 thousand naira living wage to workers and end the era of labor casualization. Aside other programs of mass public housing scheme, the government he intends to lead has made a pact with Nigerians to fund a FREE, COMPULSORY AND QUALITATIVE EDUCATION. This is in addition to the payment of yearly 200 thousand cost of study allowance to students. These are programs that set Sowore apart from other younger candidates.

The likes of Moghalu, Durotoye and Oby intends to maintain the status quo, Omoyele Sowore intends to completely smash this bloodsucking system of greed and power. According to Omoyele Sowore, the Nigerian people MUST win, either through election or by a revolution.

The 2019 election isn’t a contest between old people and young people as they want us to see it; it is a struggle between the suffering Nigerians and their oppressors who profit from these sufferings. 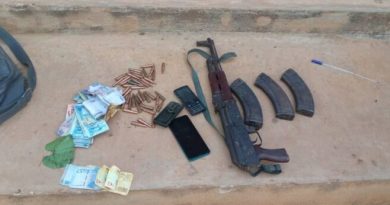 Governments’ Accountability For Responding To COVID-19, NCDs And Tobacco Epidemics