The Lagos State House of Assembly has given Akinwunmi Ambode, Governor of Lagos State, the opportunity to defend the allegations of illegal expenditure regarding the 2019 appropriation bill, before the house decides on the proposed impeachment moves against him.

Right Honourable Mudashiru Obasa stated this during the plenary session held on Monday.

“Within a week, we can come back here and do whatever we want to do regarding those who are clamouring or who have asked for impeachment. And if by the end of the day, there is need to consider whatever response from them, then we can as well move forward,” Obasa said.

The lawmakers are alleging that Ambode has started incurring expenditure on the 2019 budget, which has not yet been presented to the house.

In his remarks on the matter, Obasa said: “There have been violations of the constitutional procedure regarding the budget. You know the consequences of this offence. I must also agree with you that the Attorney General, the Finance Commissioner, who are in the better position to inform the Governor adequately or advise in such manner to have saved him from all these.”

He noted that the budget should have been presented last Monday, but wasn’t, noting that it was out of place for expenses to be incurred on a budget that had not been presented.

“Amidst all that has been said in the media, I would use this medium to clarify this: Lagos State House of Assembly cannot sit and scrutinize a budget which is already incurring expenditure,” Obasa added.

According to the House, a committee was set up and it was discovered that the 2019 budget is already being implemented by the Executive without being laid on the floor of the House. The Committee also noted in its findings that for the 2018 budget, the third quarter had not performed beyond 50 per cent.

The Speaker, however, urged the lawmakers to allow the executive arm of government led by the Governor to defend the “infractions”, before they take action on the matter.

The House has adjourned its sitting till February 4, 2019. 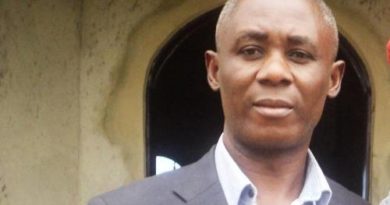 My Detention Story By Fegalo Nsuke

Monday, September 21 has been declared a public holiday to mark Kwame Nkrumah Memorial Day in Ghana. “The general public