Hiding under cover of the weekend and late in the day on Friday, President Muhammadu Buhari suspended the Chief Justice of Nigeria, Walter Onnoghen, a southerner.

He swiftly swore in his “replacement,” a northerner whom I will not bother to name.  His identity is simply that he is a northerner, as opposed to Onnoghen whose crime is that he is a southerner.

In his four years in office, Buhari has not hidden his disdain and disrespect for southerners and has consistently and persistently appointed northerners to critical positions.  According to him, he appoints on merit.  Which means it is only northerners he finds worthy of respect.

Now he replaces yet another southerner with yet another northerner, to the embarrassment of both north and south.  But his latest shenanigan goes too far: under the constitution of Nigeria, he does not have the power to remove or suspend the Chief Justice.  He can only undertake such an action if he is “acting on an address supported by two-thirds majority of the Senate.”  But he didn’t consult the Senate, and there is no such motion before the Upper House.

Whatever it is, he has gambled on the silence or indifference of Nigerians who care about Nigeria.  This is not about Onnoghen’s corruption or any issues he may have with anyone; this is about the constitution and laws of Nigeria.

And Buhari is gambling that throwing Nigeria into another civil war is better than losing the re-election referendum he faces in three weeks, for that election is a referendum on his track record since 2015.

Nigerians must refuse to be thrown into a North vs South conflict.  If there is a conflict, it is for the soul of One Nigeria and her democracy.  It is Nigeria vs Buhari, and Nigerians should collectively tell him he does not own their soul. 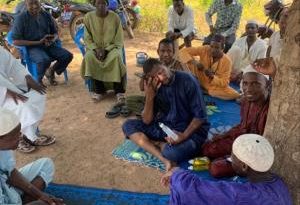