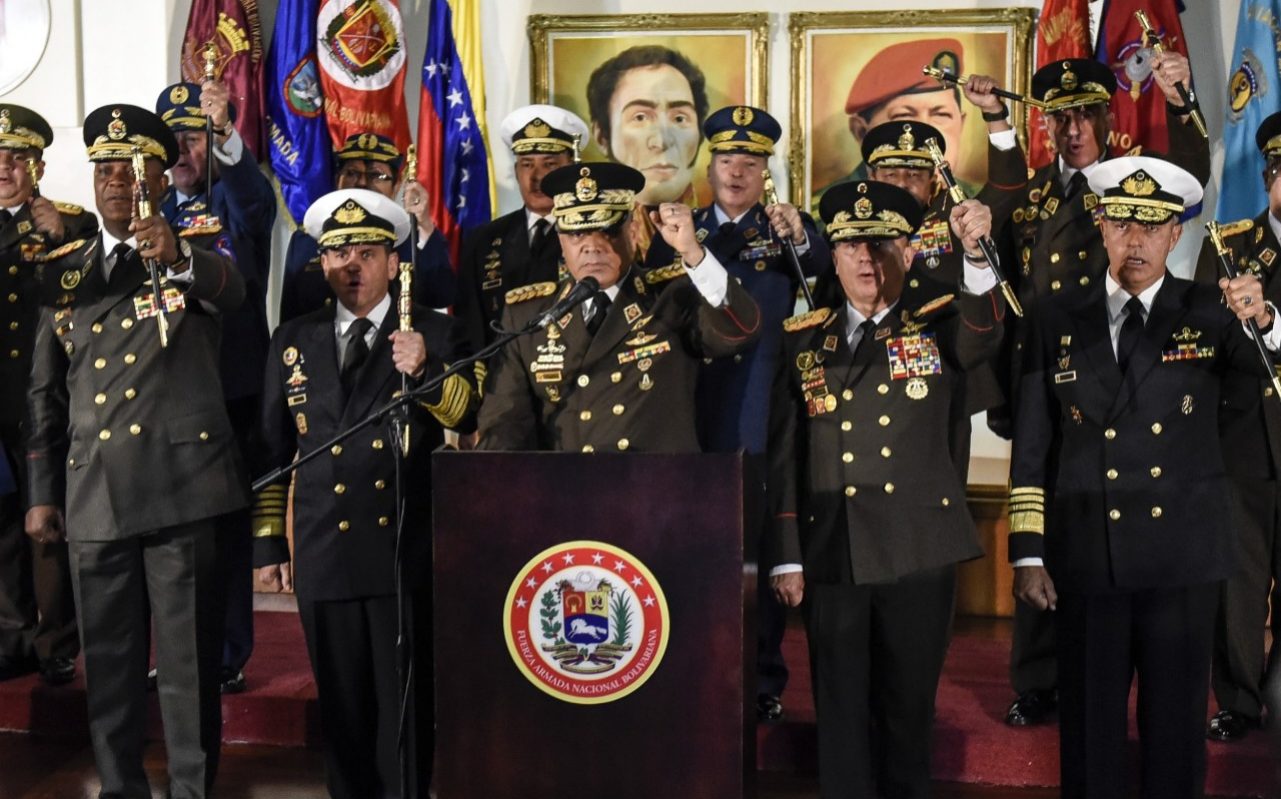 The Venezuelan military high command on Thursday threw its weight behind Nicolas Maduro, upping the stakes in the stand-off over the country’s leadership as the US warned his regime against the use of force on protesters.

The day after Juan Guaido, head of the parliament, swore himself in as interim president in front of a rally of thousands and was swiftly recognised by regional powers, military commanders took to the airwaves to make their allegiance clear.

General Vladimir Padrino, the defence minister, accused Mr Guaido of mounting a “coup d’etat” and said the armed forces would not back a president “imposed by shadowy interests”.

In one of several messages from the top brass broadcast on state TV, General Padrino said the 35-year-old opposition leader was staging a putsch “against democracy”, adding that soldiers would be unworthy of their uniform if they did not defend the constitution.

The broadcasts were aimed at reasserting Mr Maduro’s grip on the armed forces after a short-lived mutiny by a group of soldiers in Caracas on Monday raised doubts over military loyalties, which will be crucial in determining how the crisis plays out.

Britain on Thursday joined a growing group of Western and Latin American countries which have recognised Mr Guaido as Venezuela’s president.

“The United Kingdom believes Juan Guaido is the right person to take Venezuela forward. We are supporting the US, Canada, Brazil and Argentina to make that happen,” Foreign Secretary Jeremy Hunt said in a statement.

While the European Union stopped short of recognising Mr Guaido, Antonio Tajani, head of the European parliament, said it was he who enjoyed “democratic legitimacy”. Mr Maduro’s victory in last year’s election was not “free and fair”, Mr Tajani added.

But states including Russia, China, Turkey, Iran and Syria lent their backing to Mr Maduro, the man handpicked by Hugo Chavez to succeed him upon his death in 2013.  The Kremlin said Vladimir Putin had phoned his longtime ally and “expressed support to the legitimate government of Venezuela amid the acute political crisis that has been provoked from the outside”.

In response to Washington’s move against him, Mr Maduro ordered US diplomatic staff to leave Venezuela within 72 hours, saying he was breaking relations with the “imperialist United States government”.

On Thursday evening the US ordered non-emergency embassy staff to leave Venezuela.

The State Department mandated the departure of non-emergency US personnel and their family members “based on our current assessment of the security situation in Venezuela,” a department spokesman said.

“We have no plans to close the embassy. The United States will maintain diplomatic relations with Venezuela through the government of interim President Guaido, who has invited our mission to remain in Venezuela,” he said.

Amid deadly political clashes in the crisis-torn country, the State Department also said that US citizens “should strongly consider departing Venezuela.”

Mr Guaido, along with the US senator Marco Rubio, had urged the US not to evacuate personnel, in light of its disavowal of Mr Maduro’s mandate.

On Thursday Mike Pompeo, the US secretary of state, warned “remnant elements of the Maduro regime” against using violence to repress what he called “the peaceful democratic transition”. He called for a meeting of the UN Security Council on Saturday to discuss the crisis.

Local NGOs have reported at least 14 deaths linked to this week’s protests, with nighttime clashes and riots across the country since Monday.

Protesters have clashed with security forces around the country and in both affluent and working class areas of Caracas, with some demonstrations spilling over into looting of nearby off-licenses and fast-food restaurants.

The US has not ruled out military intervention, saying that “all options are on the table” if Mr Maduro’s forces employ violence.

But on Thursday John Bolton, the national security adviser, said Washington was focusing on economic measures and would seek to cut off Mr Maduro from the oil revenues that have propped up his regime.

“We think consistent with our recognition of Juan Guaido as the constitutional interim president of Venezuela that those revenues should go to the legitimate government,” Mr Bolton said. It is unclear, however, exactly how that would work, and Mr Bolton acknowledged that US officials were still studying what would be a “very complicated” process.

The US also says it stands ready to ship $20 million in humanitarian assistance to the beleaguered country, where petroleum riches have failed to prevent a dire economic crisis. Hyperinflation and an acute shortage of food and medicines have sent millions fleeing the country in recent years, with the exodus across the border into neighbouring Colombia swelling amid this week’s events.

The whereabouts of Mr Guaido remain unknown, and it is expected that authorities will seek to arrest him on treason charges. But on Thursday he remained active on his social media accounts.

“We are in a crazy, mixed-up country,” said Luis Rodriguez, as he walked to his work as a plumber in the capital.  “We have two presidents, two assemblies, and we’re dying from hunger, and a lack of medicines.”