Amazon is experimenting with delivery robots, starting with a little truck called Scout which is taking to the pavements in Washington State.

Six of the autonomous electric trucks will deliver parcels “at walking pace” round Snohomish County.

The robots will only operate during the day and will be accompanied by an Amazon employee initially.

It is the latest in a series of trials of pavement robots, seen as being a good alternative to road deliveries.

“We developed Amazon Scout at our research and development lab in Seattle, ensuring the devices can safely and efficiently navigate around pets, pedestrians and anything else in their path,” said Amazon vice-president Sean Scott on the company’s blog.

The truck is shown in a promotional video delivering a parcel, with a lid automatically lifting when the customer comes out of their house to retrieve the package. Details of how exactly this will work are not given. Neither is there any explanation for what happens if the customer is not in at the time of delivery.

Amazon will not be alone in making such deliveries. Robotics firm Starship Technologies has also just announced a fleet of two dozen autonomous robots that will deliver coffee and pizza to college students in Virginia.

The robots can be requested via an app to deliver goods across the campus of George Mason University.

San Francisco has had delivery robots on its streets for several years, with tech start-ups, including Marble and Starship, leading the way.

But there has been something of a backlash, with some living there describing the robots as a menace and questioning how safe it was to share the pavements with them.

In 2017, city supervisor Norman Yee introduced legislation to restrict their use, including capping the number of permits issued at three per company and requiring the delivery bots to only operate within certain neighbourhoods. They must also be accompanied by a human at all times.

The new behavioral science of risk taking in business 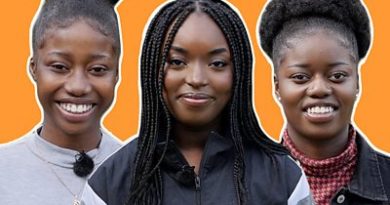 Meet the teens who developed a dementia app which uses music

You are not the first sycophant to live, where are the likes of Jerry Gana and chief Ojo Maduekwe today. Your mouth will ruin you Femi.

that is what he is paid to do. i dont blame him at all.

This man has lost it, I'm ashamed for his shame.

Whatever he says is an opposite of the real answer. He loves deceiving his master. The percentage of those that love bubu is 1 over 100.

Your daily bread is sure. U cannot say the truth any more. But it must be known. Yes decive yourself but you cannot decive God. That is my joy. The end shall justify the means. Good day Femi Adesina

Ozuor... That is what we call this kind of a person in Esan language

What figure of speech is this?

He knows what he's saying ONLY GENIUS WILL UNDERSTAND