How delighted I am to write you today cannot be expressed in words totally.

I write with the hope that this meets you well and communicates the plight of the average Nigerian student.

It is true that many students like me may not understand the reasons for the unending strike actions we have to encounter as students of public tertiary institutions but we do understand the psychological effect it has on us directly.

We will also love to agree with the union that the strike is in our favour, but how do you explicitly explain this to my mates and I as we watch our counterparts in private universities go about their academic activities uninterrupted and graduate as and when due.

I have been told several times that in other parts of the world, public universities are better than private universities, although I haven’t visited any country aside Nigeria (my beloved fatherland ), I’ll be forced to believe so as tertiary institutions in Europe rarely embark on incessant strikes like it is the norm here.

Our hopes have been raised and shattered over and over again by the numerous unyielding meetings and negotiations between the Federal government and the union.

The last meeting held on Monday, 21st of January, 2019 gave so much hope to me and many other students who are affected by the strike after we read about the instruction given the labour minister Mr Chris Ngige by the President to make sure all issues that have kept us away from school are resolved. But little did we know that the meeting would end like others.

We are getting to the point of depression and are about to give up on our education system, our plans are altered; how we are faring appears not be put into consideration.

Sir,  you may or may not be aware that when the strike is called off all students will be made to jump hurdles which they are unprepared for; we will be put on ‘fire brigade’ mode; we will have to cover a four-month course in one month.

Has the union thought about how much stress this will cause our brains, our mental health and the financial implication on our parents, who will not be given enough time to be able to provide the money needed in school?

What about students in their final year who have a lot of school work to do, ranging from assignments and research work to project writing amongst others? Don’t you agree that the strike should be called off for the sake of these ones.

The Joint Admission Matriculation Board (JAMB) has forms on sale for the next Unified Tertiary Matriculation Examination (UTME) whereas the newly admitted students in various universities are yet to begin registration or lectures, how will they cope as newbies in the system? Will these groups also get involved in the ‘fire brigade’ service.

In all, I may not have spoken the minds of all public university students, I have communicated the feelings of most. We plead that as a father you hearken to the cries of your children and see reasons to find a common ground with Federal Government and put an end to the strike. 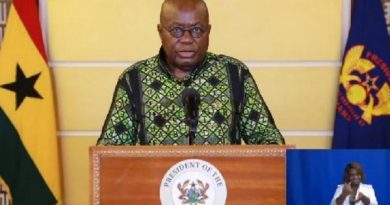 Admin please appreciate this post and God bless you please pray for my son
I feel like is going off my only son I'm hopeless and doesn't know what to do please my brother and sister don't pass without saying a word of prayer to him and help to share it to order to pray for my son, and this is my moment that I lost his father now in a fatal accident, on his way back from Onitsha. and I have been suffering ever since from my son heart failure please my brother and sister help me

He is dying slowly as day passes by please I can't keep this on myself alone do not forsake me please the doctor is demanding for 1.6 million Naira for treatment I had sold his father's properties we have managed to rise some of 500,000 because we have wasted a lot before thinking that everything will be fine
Please 1000,2000,3000, 4000,5000 is something please help me God will bless and keep you out of sickness like this is his Mother account details if God move to support please

May God not let you down as you are sowing in another life may God continue to be sowing your life and your family May any of your family member never experience sickness
Pls pray ... See MoreSee Less

Lord your divine healing on this innocent child.

I decree and declare healing from the crown of your head to the sow of your feet in thy mighty name of Jesus Amen.it is well.

Be healed in Jesus Christ's name

U re healed in Jesus name

May God heal him

you are heal in Jesus name amen

But wait ooh. Is this not the picture of the boy that was rescued by a white lady when he was dying of hunger. Na wa

Even the writing alone,you should know is a scam😀😀

Divine healing come in him now in Jesus name, Amen.

This is the problem with African. See all the prayers without even reading the post to understand. Not all situations need miracles, some just need human effort and simple reasoning. This is a post that says he is his only son and later was talking about his father died in an accident. All sign of fraud written all over this post and yet people a conjuring and carbashing in God's name. Everything na about miracle for Naija. Funny enough, na cash the guy bin even ask for ooo

Hmm he that walk larazus from death will heal him🙏🙏🙏🙏 AMEN

You're healed in Jesus name

Take him to the hospital

The Allah u recuse Ayuba be the God of this Child

That's hilarious 😂 but thank God, he who Lough last Lough best. They will hid there head in shame now.

He who laughs last.

He who might have ploted evil, will expect evil waiting for him at the front of his house.