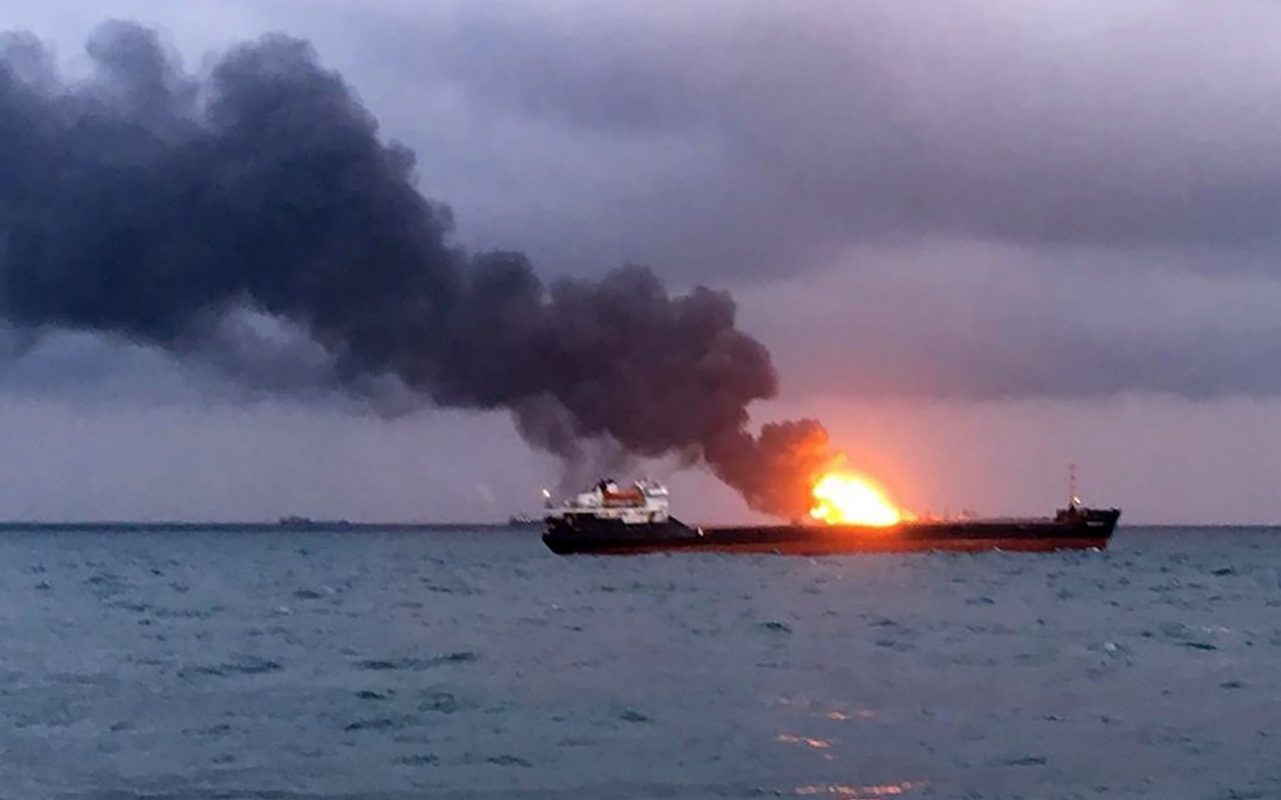 Fourteen people were killed and five were missing off Russia-annexed Crimea in the Black Sea on Monday after a fire engulfed gas tankers sailing under the flag of Tanzania, authorities said.

“There are 11 bodies,” Alexei Kravchenko, spokesman for Russia’s Federal Agency for Maritime and River Transport, said.

“Another three people went under water before rescue workers’ eyes.”

Those three are most likely dead, he said.

The ships, the Kandy and the Maestro, had crews of nationals from India and Turkey.

The Kandy had a 17-strong crew, while the Maestro carried 14 people.

Twelve people had survived, Kravchenko said, but “no one knows where the other five people are”.

The fire broke out when one vessel was transferring fuel to the other, driving both crews to jump overboard, said Kravchenko.

Authorities in the Crimean city of Kerch were preparing to receive the victims, he added.

The accident struck close to the Kerch Strait, which has become a new flashpoint in tensions between Russia and Ukraine.

In November, Russia fired on and seized three Ukrainian navy vessels in the Kerch Strait as they tried to pass from the Black Sea to the Azov Sea.

The confrontation was the first open military clash between Kiev and Moscow since 2014, when Russia annexed Crimea and a pro-Russian insurgency erupted in eastern Ukraine.

Four in ten children are breathing “toxic air” at school

The political trajectory Esan found itself without doubt ought not to allow selfish and inconsiderate EPM to have any sort of political audience in Uromi/Esan.

Some of us fell cheaply for imaginary promises for political appointments and goodies by Oshiomole /Ize-Iyamu and that excess baggage of greed and avarice overtook their political rationality above community interests.

Commonsense indicates glaringly that it will be faster and less years consuming to grab Esan governorship position via supporting Gov. Obaseki. 4 years is commonsensically less than 8 years. Supporting Ize-Iyamu was to empower and extend Oshiomole's arrogance and flippant behaviour towards Esan. Supporting APC was self-suicidal and full of insignificant political relevance.
So it was a situational choice most of our people made to support Obaseki and good governance.

We will no longer allow me me me me political syndrome in Esanland. This is paradigm shift whether you like it or not. Go and pursue personal materialistic acquisitions in business and other endeavours that do not counter the sociopolitical growth and development of your people and Edo State. Esan is proud to be part of the sociopolitical re-engineering of Edo State in collaboration with Gov. Obaseki.

Things will get better.
Odalo aghe.

YOU SAID IT ALL MY BTOTHER

That's it! God bless you my brothers.

That's common sense and I wish we should learn from the write up. Thanks so much, brother.

We have finally caged the lions from Edo politics, says Gov. Obaseki

Attack on police officers in Sokoto will be addressed – AIG