This saying is especially true for Nigerian brand of politics where there are no clearcut ideologies on which most political parties are built. Nigerian politicians, like birds of passage, often flock from one political party to another in search of favourable season.

President Muhammadu Buhari and Ex-President Olusegun Obasanjo are at loggerheads now. Obasanjo it was who fired the first salvo, likening Buhari to late military dictator Sani Abacha, and warning the people that they must not be fooled a second time by voting for him. Buhari’s response was the more epci, though, as hestpped short of calling the former president sick, telling to “get well soon” after finding a doctor.

But did Buhari always considered Obasanjo sick? Of the numerous cases that can be cited, below are eight of Buhari thinking very highly of OBJ:

Contrary to what Muhammadu Buhari and his party — All Progressives Congress (APC) — are saying now that Obasanjo is an intolerant and self-opinionated person who doesn’t listen to others views, Buhari once called the Owu-born retired general, who was his senior in the military “a tolerant leader”. He made this remark on February 3, 2016 during the 40th anniversary of Ogun State. Buhari said: “I express my thanks to General Obasanjo who, as head of state, made me Minister of Petroleum and tolerated me for three-and-a half-years.”

February 2016: ‘I am a Lazybones; Obasanjo Is A Hardworker’

Speaking further on that occasion, Buhari had also said: “He tolerated me because God knows and he knows that I am not used to working as hard as he used to, but he allowed me to last that long and allowed me to work”.

At the same occasion, Buhari went down the memory lane and reel off the impressive feats achieved by Obasanjo, which subsequent administrations after him refused to build on. Buhari said: “If you go into the records, that government made so much investment and infrastructural development in the petroleum industry. Two refineries were built, Warri and Kaduna. More than 20 depots were built; more than 3,500 pipelines were laid, and we were exporting refined products of 100,000 barrels per day.”

Buhari then paused and asked a rhetorical question “But what do we have today?”

March 2015: He Tells The Truth To Power When Things Are Going Wrong

Buhari and the APC have used numerous unsavoury adjectives to describe Obasanjo ever since things went awry between them. They have described him as a leader who loves passing the buck and not owning up to his mistakes in office. However, in a statement issued on the occasion of Obasanjo’s birthday, Buhari called Obasanjo “a courageous patriot who tells the truth to power when things are going wrong”. Why the anger now when again the courageous patriot is at what he knows how to do best — “speaking truth to power?” you may wonder. Perhaps things are going wrong again and Buhari doesn’t want accept the home truth.

March 2015: ‘His Voice Is The Conscience Of Leaders’

Contrary to their — Buhari’s and the APC’s — claim now that Obasanjo is a disgruntled old man who cannot stand the impressive performance of Buhari, Buhari once called Obasanjo “a nationalist whose commitment to democracy and good governance are worthy of recognition and praise”. He further said “Obasanjo is a true stateman and nationalist who doesn’t abandon his country when it needs his voice to jolt the conscience of leaders to listen to those they govern”. Can we say that’s what ‘Baba Iyabo’ is doing now?

March 2015: Obasanjo’s Legacy Will Outlive Him For His Leadership Qualities

Still paying glowing tribute to Obasanjo, Buhari in the buildup to the 2015 general election said Obasanjo would remain indelible in the sand of time. Buhari said: ”Obasanjo’s name will be cast in stone as one of those Nigerian leaders that served their country with passion.”

March 2015: ‘Obasanjo Knows More Than We All Know’

Prior to the 2015 general election when Buhari was trying to win Obasanjo to his camp, he called Obasanjo a repository of knowledge on national issues beside whom his own knowledge pales into insignificance. He said: “Sir, it’s a fact that you know more than all we know about the problem we are in. But what we will do is try to convince you to believe us that we are going to do better”. Why Is Buhari not ready to learn from his teacher again you may ask?

In a message to Obasanjo by Femi Adesina on the occasion of his 79th birthday, he called Obasanjo a man who improved the Nigerian economy during the time he presided over the affairs of the country. Then, Buhari praised Obasanjo “for your vision and commitment to the growth of Nigeria and Africa, which translated into a historical growth of six percent for the Nigerian economy after a long period of slow growth and also created  a rippling effect that buoyed other African economies”. 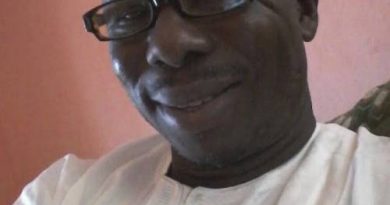 Electoral Reforms And Protection Of Vote By Uche Ugboajah

I always advise our youths to be calm and learn from strategic political analysis. What is not talked about is worse than what is talked about.

The people are the ones to decide the type of governance they want. That is participatory democracy. You cannot get political analysis right if you are overstretched by stomach politics and anger. You need to listen to others.

Thank you brother for the consistency and hope you always give on this platform. I can hear the song of victory

You are always on point, your analysis is accurate. God bless u sir!

I am afraid they don't do their over night work.

President Akufo-Addo, on Monday, 27th July commissioned the Yapei Water Supply Project, in fulfillment of a campaign pledge he made