It is no longer news that President Muhammadu Buhari seems to have made up his mind to extend the tenure of the Inspector-General of Police, Ibrahim Idris, possibly by six months according to some media reports. The IGP was officially billed to retire from the Nigeria Police Force (NPF) on January 3, 2019, given that he has attained the mandatory 35 years in service. This gift of a six-month extension the IGP Idris is to enjoy is not unique to him in the history of the Buhari administration. It is a questionable abidance on the part of President Buhari by the wisdom in the famous idiom, what is sauced for the geese is sauced for the gander.

On two different occasions the president extended the tenures of the Chief of Defence Staff, Gen. Abayomi Olonisakin, the Chief of Army Staff, Lt. Gen. Tukur Buratai, the Chief of Air Staff, Air Marshal Sadique Abubakar, and the Chief of Naval Staff, Vice Admiral Ibok Ete-Ibas. Statutorily, defence and service chiefs are expected to serve for two years. Having been appointed on July 13, 2015, their respective tenures ended on July 13, 2017. The first extension of tenure for these security chiefs was in July to December 2017. Towards the end of December 2017, the president, exercising the power of his office as enshrined in Section 218 (1) and (2) of the 1999 Constitution, renewed the tenures of office of the defence and service chiefs – this time without any exact termination date. This silence on a finish date explains why those chiefs are still in office. As in their case, the question of why IGP Idris deserves an extension of tenure is still pleading for a logical answer.

Beyond the fact that he is constitutionally empowered to renew the service time of his security aurochs, the president does not see any compelling reason to examine the quality of performances of these men in office before gifting them with more service space. For had President Buhari done so – training his mind objectively on the verifiable evidence of the security chiefs’ performances on the job –, it would have been unambiguously clear to him that they did not deserve the gift of tenure extension he generously showered on them. It is a no-brainer that, to maintain and improve on what works, viable organizations, corporations, and countries attract, maintain, and reward performing minds. Sadly, this cherished tradition of maintaining the best and rewarding performance is alien to the Buhari administration.

What is IGP Idris being rewarded for? Exceptional transformation of the NPF? Provable improvement of the security situation across the country under his watch? Far from it. There can be no doubt – except of course to the choristers in the orchestra of the APC propaganda – that IGP Idris’s tenure in office in about the last three years has not catalysed significant improvement in the security situation of the country. In many regions of the country, insecurity of varied colourations stands out like the epaulets of a fashion-conscious officer. The IGP understands his job mainly as fighting the president’s political opponents. He is more active at stoking the fire of needless controversies and thumbing his nose at revered institutions than acquitting himself competently on the policing job. If he was not disregarding the directives of the president as the famous Benue case showed, he was either telling the National Assembly that he could not honour their invitation to give account of his stewardship, or instructing state governors to open up their states for unstructured cattle grazing. Under IGP Idris’s watch, the army under the equally disturbing leadership of Lt. Gen. Buratai has gained more visibility discharging the functions of the NPF. If there is any achievements IGP Idris could point to for which he merits the gift of a tenure extension in office, they will be at best microscopic and tokenistic, and of no enduring value to either the NPF or the country.

Puzzlingly, instead of using the occasion of the expiration of IGP Idris’s tenure expiration to refresh the NPF with a far more competent, disciplined, and innovative head, President Buhari elected to reward averageness. What counts for excellence and thus fitting for reward in President Buhari’s reckoning is not difficult to fathom. It is sheer underperformance, incompetence, and the aridity of ordinariness. It is punishing to know that the current Nigerian leader neither aspires to excellence nor does he demand and seek it in his appointees. If he does, the appalling security condition in the land would have motivated the appointment of a new police boss. If excellence, competence, and character matter strongly to the president, he would have effortlessly observed that IGP Idris has given his best and that best is an athlete for a short-distance race. It does not seem to occur to President Buhari that a presidency is as good as those who serve it.

The Socratic imperative to engage in self-examination may still come to the aid of the Buhari administration if it does not continue to abjure it – assuming he wins the February 2019 presidential election. If the president and his kitchen cabinet embraces this invaluable element, it will be abundantly manifest to them that garlanding the shoulders of IGP Idris with an extension of tenure is – although lawful – an unhelpful political expedient. If truly national security is a very serious matter (the reason for which people like the Shiite leader and his wife, and the former NSA Dasuki are hidden against their wills), then a tired and less innovative mind like IGP Idris needs to be allowed to enjoy his deserved retirement.

Ademola writes from the University of Manitoba, Canada. 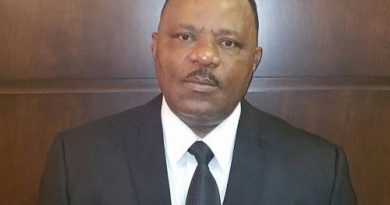 Why APC Should Tame Tinubu Before Oshiomhole By SKC Ogbonnia

Approval of $1.5bn for rehabilitation of Port Harcourt Refinery is another Financial Jamboree-Onuesoke

Madam Adjowa Bawa, mother of 13-year-old Adjowa Adjeiwaa, is appealing to the public to assist her daughter to regain her