President Muhammadu Buhari says he will concentrate on governance despite the onset of presidential campaigns because Bola Tinubu, National Leader of the party, who is “fully in charge” of the newly-inaugurated campaign council of the party, will be keeping a “24-hour vigil”.

Buhari said this on Monday during the inauguration of the All Progressives Congress (APC) Presidential Campaign Council.

“Even though we have only 40 days, this campaign is going to tax us all, because we intend to touch all corners of our great and vast country,” he said.

“But I must also add that, though we will all be deeply involved, I would like to assure the nation that I will do my part without making governance or my work suffer. Asiwaju Bola Ahmed Tinubu, my co-chairman, will be fully in charge, and is going to be on 24-hour vigil.

“That is to say, the operational buck of this campaign stops at his table, and I therefore urge all of us in the leadership of this campaign, in the field operations on the campaign trail and in the secretariat to consult with Asiwaju whenever guidance is needed.”

BUHARI’S SPEECH IN FULL
I would like to welcome you all, the leaders of our party, the All Progressives Congress, APC, to the formal inauguration of the APC Presidential Campaign Council for the purpose of managing our campaigns for the 2019 general elections.

2. This is a historical moment and I consider it a great privilege to have been unanimously nominated by our party to run as its candidate, unopposed, for a second term of office as the president of our country Nigeria.

3. I thank God Almighty, and our hard working, long suffering, yet resolutely committed fellow citizens, for the continued investment of their trust in our own commitment and competence to redirect our country and its governance towards sustainable and wholesome development.

4. I congratulate all our party men and women across the country, who are seeking election alongside me, as well as those who have found it necessary to run on other political platforms.

5. I congratulate all the participants in the party primary process, who may not have gotten all they wanted, but who have accepted to continue the work of ensuring a healthy political process.

6. I urge all those with any remaining reservations, to recommit themselves to the central task of our victory in the elections and to the greater goal of uplifting this nation towards its manifest destiny.

7. Having waited for all the dust raised by the nomination exercise, and the carefully worked out reconciliation processes to ensure some measure of healing, we are better placed to put together an all inclusive campaign council, that will effectively engage the entire voting public throughout the length and breadth of our federation, and deliver a resounding victory for us at the general elections.

8. This Presidential Campaign Council was constituted with a conscious determination to ensure inclusiveness and excellence, and is expected to conduct a campaign based on our modest achievements to turn around our beleaguered nation from insecurity, stagnation and massive abuse of scarce public resources.

9. Nigerians voted us into power in 2015 because they put trust and confidence that we will make a great difference. We are now building on the experience of our successful outing in the 2015 elections. It is my hope that this wonderful team put together will anchor our campaigns to lead our party and its candidates to victory in the general elections in a few weeks’ time.

10. A victory for us as a party is a victory for all well meaning Nigerians, who are committed to CHANGE from an inglorious past; where those in positions of public trust willfully took for themselves what belongs to us all; where the security of our citizens was second place to their acquisition of unwholesome wealth; where our economic growth was sacrificed for the fleeting ease of import dependency.

11. We have in the last 3 years and 6 months reversed this downward slide that the PDP took us in its 16 years of misrule. We have restored the territorial integrity of our nation, thanks to our gallant men and women of our armed forces. We are systematically engaged in all the remaining corridors of insurgency, kidnappings, robberies, herdsmen and farmers clashes.

12. We have reset our national values: corruption is no longer condoned and is no longer seen as normal for public office holders. The agencies of government are no longer equivocal in dealing with anyone who flouts our laws.

13. The high and low are receiving jail terms, loots are being recovered, and Nigerians are increasingly displaying the timeless values of honesty, honour and decency. I congratulate us all for making these changes possible.

14. Our economy has become a prudently managed enterprise. Our resources are now working for us, as we ensure the delivery of key national infrastructure, which were left unattended over these past years.

15 The direct impact of our policies on improvements in roads, railways, and power supply are evident. There is greater evidence of economic diversification seen in growing local production of agricultural produce and solid minerals.

16. Our government has succeeded in the last four years in halting national drift, removing the shadow of insecurity and fear dominating our life and reviving our economy from decline to stability and growth. The macroeconomic health of our economy, indicated by several measurable factors such as a stable exchange rate, lower inflation, growing foreign reserves, has been applauded by independent local and international rating agencies.

17. In addition, the quality of elections since 2015 has continued to improve with declining levels of problems that have defined elections in the past. Free, fair and credible elections are the foundation of political stability and peace in any nation.

18. We have insisted that votes must count and have maintained a policy of non-interference in elections. INEC has so far since 2015, conducted fair and credible elections in 195 constituencies nationwide, which have been attested nationwide to be qualitatively better than previous elections.

19. Let me reiterate my commitment to free and fair elections. If there is one legacy I want to leave is the enthronement of democracy as a system of government. And for democracy to be enthroned, elections must be free and fair. That means citizens have a right to vote for candidates of their choice without intimidation in any form. I have warned INEC and security agencies to that effect.

20. We will keep insisting that votes must count. Our campaigns will be anchored on our performance in the last four years. There is no doubt that our party has succeeded in taking Nigeria to a new level of enduring peace, economic growth political stability, justice and progress. This is the new level we are promising Nigerians, the details of which we will take to Nigerians as we embark on our campaigns.

21. As we begin campaign in earnest, I implore our leaders to resist being provoked, remain focused and civil in our campaigns. Let us engage our citizens on issues and ask for reflection on the comparative difference between 2015 and 2019 on security, economy and corruption and abuse by those entrusted with leadership in Nigeria.

22. As we embark on the campaign to secure mandate for the next level, I want to acknowledge the sacrifices and contributions of all stakeholders who have endeavored to keep our party united, and our governance successful.

23. I urge members of this formidable team to always keep their eyes on the ball, which is the success of our party at the polls. I wish to appeal to all members to be guided by the enduring vision behind the formation and sustenance of our party, which is anchored, on sacrifice and imperative to salvage and stabilize our great and promising nation.

24. I appeal to all our members, and especially those who are in the campaign council, to unite and cooperate and ensure a smooth operation. Needless to add, Directorates could co-opt on full or part-time basic persons who could add value to our campaign and help us to attain success.

25. To my mind, the division of responsibility is clear enough. The Leadership that has formulated the campaign policy will supervise its execution; the Director-General will have overall responsibility for all aspects of the campaign, including field operations; while the Secretary will be responsible for all administrative and treasury-related activities of the council.

26. Even though we have only 40 days, this campaign is going to tax us all, because we intend to touch all corners of our great and vast country. But I must also add that, though we will all be deeply involved, I would like to assure the nation that I will do my part without making governance or my work suffer. Asiwaju Bola Ahmed Tinubu, my co-chairman, will be fully in charge, and is going to be on 24-hour vigil.

27. That is to say, the operational buck of this campaign stops at his table, and I therefore urge all of us in the leadership of this campaign, in the field operations on the campaign trail and in the secretariat to consult with Asiwaju whenever guidance is needed.

28. It is on this note, and in the name of God, that I now have the pleasure of inaugurating the APC Presidential Campaign Council 2019.

Thank you all very much. God bless our country.

COVID- 19:  NCDC issues advisory on use of cloth face masks 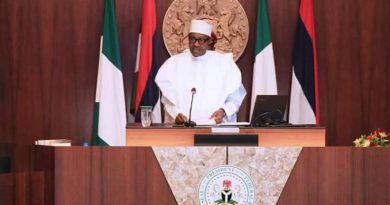 The national honour on Tinubu, Saraki others – blueprint.ng