For reasons advanced in Part One of these treatises, All Progressives Grand Alliance (APGA) set out on a different trajectory. The present Part Two shall focus more on the reasons the fortunes of the Party keep fluctuating, and what could be done for the Party to stay course and enlarge its coast.

All considered, no one can sincerely say that the expectations of Ndigbo and indeed that of Nigerians have been cut short with APGA. If not anything, the Party has shown itself the most resilient party in Nigeria and has survived as the Third Force in the nation’s political Party equations. Its tenacity cannot even be compared to that of the PDP since the latter has faltered now and again, and now struggling with the bright opportunity it has to return to power at the center.

Compared to APC also, APGA is congruently more resilient too. APC is yet to evolve and mesh into a truly political party. For each time it is convulsed, a chunk of it falls off. Recall that there were at 4 legacy blocks that merged with a view to grabbing power from Goodluck Jonathan and the PDP – the ACN, CPC, ANPP and the newPDP. Out of the 4, the newPDP is almost completely gone back to the PDP. The Senate President Bukola Saraki who led their exit in 2014 is still leading the reverse movement back to what they once left as carcass.

On the contrary, APGA has not yielded to any pressure to merge. When that would have happened was when one of its governors, Owelle Rochas Okorocha of Imo State joined the APC in 2014 but the Party distanced itself from the then emerging APC mega amalgam.

The reason APGA has stayed separate is not that it is unaware of the strength in such amalgamations. But subsuming itself under such new amorphous assemblages would mean losing its uniqueness, identify, philosophy and above all, the original idea behind its formation. Lest we forget, though never formed as an Igbo party, APGA was definitely formed to give Ndigbo a platform and a say in the new democratic dispensation.

Many have argued that APGA would have fared better if it had merged with the PDP, especially when Peter Obi left it despite his avowals to swim or sink with the party, a promise he made directly to the late Emeka Ojukwu, who became the face and the soul of the party shortly after it came into existence. Of course, only dead men don’t change their opinion, so what Obi did with APGA is said to be only politics at least in our own clime.

Many have also argued that APGA should have gone with Okorocha to the APC. Again, for the same, it would have ended a blossoming dream of the Party’s founding fathers. No Party goes into merger without being completely lost in the shuffles. Political mergers are like melting pots, a term coined by an immigrant, Israel Zangwill to describe what happens when cultures come together and lose their individual identities.

Extrapolating the term to politics, melting pot should then be a political environment in which many ideas and ideologies are politically assimilated, each losing their individual identities and evolving a single political party with a new ideology. APGA shied away from this for good and strategic reasons.

APGA has shown strength in the South East and in many parts of Nigeria in general, even in places where the party is believed to have less than an outside chance. APGA can be likened to Rangers International Football of Enugu, the only Nigerian premiere football club that has not gone on relegation. They may not win the league but they usually finish strong and never threatened with relegation. They have several national and International trophies to show for it.

Most Igbos who started out in the 70s and the 80s still have Rangers as their first team despite the fact that their respective states may have better performing teams. They consciously and unconsciously look out for their first love – Rangers Intl – while checking the league results, and celebrate when the team is doing well and saddened when the team’s results are not so encouraging. Habits die hard, you dare say.

The love that most Ndigbo have for APGA is like the love of these older generations for Enugu Rangers. For me too, it is like a catholic marriage; you may or may not be happy in it but doesn’t break! How this love and bond can be maximally utilized shall be treated in the concluding part (4) of these treatises.

Justifiably, many had expected that APGA would produce the governors of at least the 5 South East States by now. Like pondered in the preceding Part One, the reason APGA has struggled in the South East is mainly because most of its founding fathers stayed put in the PDP and even fought against APGA to enthrone the PDP in the South East. This in itself is contradictory, for no party can survive without enjoying a base and electoral victories, Yet, APGA finds its parents in the same trenches and in the do or die Nigerian politics.

In Anambra State where the party (APGA) has remained dormant, it had had to apply itself maximally in a manner that the PDP has not had a viable state EXCO for a decade.

The Anambra experience has proved that for APGA to rise in the other States, something drastic has to happen. Apart from that, it is also so up to whoever emerges as governor.

APGA has suffered gravely from politicians who lack ideological foundations and commitment. As a political thinker James Freeman Clarke put it, politician thinks of the next election a statesman, of the next generation. But these are men and women merely seeking platforms to run and win elections. Thereafter, the political parties that offered themselves are relegated.

Ordinarily, a political party is an organized group of people, often with common views, who come together to contest elections and hold power in the government. The party agrees on some proposed policies and programmes, with a view to promoting the collective good or furthering their supporters’ interests. In Nigeria, what obtain are strange bedfellows and fair-weather politicians who are ready to sacrifice their parties for lucre and pots of porridge.

The APGA Party leadership has to watch this X factor. There are men and women who have stayed faithful to the party. But because the party would need money to prosecute any election successfully, viable aspirants with deep pockets very often get the ticket at the detriment of real party faithful.

This is not an APGA thing. All political parties are guilty of this.

The money factor is one huge dilemma besetting the political system in Nigeria. And APGA has not controlled many state governments to have enough financial support. Yet, it has a National Secretariat to run and bills to pick while members funding the party through dues and so on remain mere lip service.

APGA has so much going for it. But much of that have remained potentialities. Time for the next level is upon it. Happily, the Party leadership is set and running with it.

Part Three is on Why Ojukwu is rightly the face and soul of APGA and moving forward is the concluding Part Four: Party Primaries fallouts: Is the Party Leadership Really to Blame? Both are coming shortly. 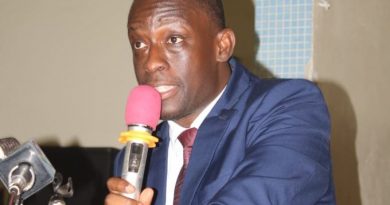 President Must Sanction The Western Regional Minister For Flouting His Directive

Government is to foot the medical bills of the victims of the Akim Batabi building collapse disaster, Vice President Bawumia