The APC and the PDP are at a fake-news race. It appears both parties are set on a single strategy of winning the February presidential election – through the audacious cross-firing of falsehood and lies.

It will be prejudicial to say who is getting ahead of the other in this punitive race of fibbing. But the two parties are outdoing each other in the use of the fake-news artillery, and in the deployment of fact-twisting ballistic missiles.

Today, APC campaign minions are posting fake pictures of completed infrastructural projects and crowds at campaign venues; the next day, PDP campaign “surrogates” are attributing false quotes to the president or any member of the government.

At different times, they switch the subjects in this ignominious task. And most times, both camps syndicate malicious and fabricated stories – like the Jibrin Aminu Al Sudani fiction – across different platforms.

But is this healthy for our politics? I do not think so.

We got to where we are today – where fake-news and hate speeches have become rife – owing to the “scorched-earth campaign strategy” deployed by the APC in the 2015 election.

Soon after the party came to power, the monster it unleashed grew seven heads. It struggles to tame it, but it is constantly reminded of its hypocrisy – who let the beast out in the first place?

It is ironical that the individual, who led the fake-news blitzkrieg in 2015, is the same person sermonising about “change begins with me” today.

The point is, whatever is traded in this election today will dictate the political atmosphere of the country in the next four years. To put it like a dummy, “we will reap whatever seed we sow”.

The APC and the PDP must realise that none of them can govern comfortably a country in the throes of anxiety, fear, division, and anarchy effectuated by fake news and hate speeches.

Nigeria must come first. And if their intention is to really serve, they must save Nigeria first by calling all their marshals to order.

Fake-news should not be deployed as a campaign weapon because it will only result in MAD – Mutual Assured Destruction.

And by the way, I understand Amina Zakari is not in charge of the collation of results as being reported. Her job, being the head of health and welfare unit at INEC, demands that she provide these services at the national collation centre.

She was formerly at the operations department of INEC, a key area, but owing to protests, she was moved to the health and welfare unit.

It is easy to get sucked into the whole emotional vortex without reason, and it is difficult to stand away from a public inquisition. 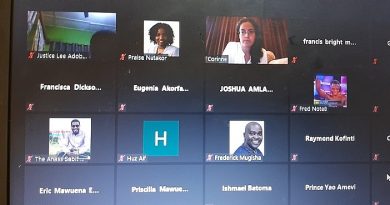 THE NEXT GOVERNOR IS COMING FROM THIS PLACE:
1.Uromi.
2.Ewohimi.
3.Ekpoma.

Omonegbegbana is my name.
Grace is my password. ... See MoreSee Less

Uromi deserves it .......Senator Odia from Esan central (Irrua) .....currently, Segius ogun member house of Rep is from Esan south (Ugboha) ....Ambrose Alli and osunbor from ekpoma........ Uromi have only got Rep under itulah....... Uromi deserves to take over after obaseki

It's too early to create this division among Esan people.

You have not finished one you are talking about another one... 🤔🤔🤔🤔🤔

I have noticed that youths are not even better.

What Are U TaLiking About Mr Talker?

TODAY’S LEADERS ARE THE LOWEST INTELLIGENCE IN HISTORY! VERY WEAK!

Honorable IT Nor Go Kill Im Self oooh!

ONE THING WHICH IS NEEDFUL JESUS SAID, she has it, not what
many of us are doing today, Jesus said one thing, find it out. ... See MoreSee Less

Philip Shuaibu who controls the Obaseki's government is not in agreement with those calling for Esan man or woman to be Governor in 2024.

You are the most confused boy in ize iyamu camp, why not take some rest just the way others do now?

Phillip Shuaibu is a complete failure. How do you describe a man who couldnt win his own polling unit, talkless of winning his ward?

I don't know why you're crying more than the bereaved

JAS ehn, you’re pained. Soon nobody go agree make you support am, yours is support and lose.

JAS and you think Phillip Shuaibu is like your small tribal bigot oshiopikin.The Deputy Governor is a man of integrity and he is not desperate like Oshiomole who thinks himself a bird when he is not even up to make a butterfly

Anybody on planet earth that think he can stand on the Esan way will be demystified and silent forever like your oshiopikin.hopeless JAS

There is no need to ask wether this guy came from a home where people fight everyday. Even when there nothing to fight about he keeps on fighting now he want to start setting family members against each other. Since the admin don't want to listen people should stop responding to this guy thank you.

I don't even know what an Ondo boy (JAS) is doing in this group.

You have started crying for nothing again . This JAS need to visit sense market

They hate truth. The PDP can not give their ticket to Edo Central in 2024 when the APC is looking at either Edo South or Edo North. Politics is a game of number. It is not a game of "na our turn"

Obaseki himself is aware of this but he had to make "audio" promise just to get them vote for him.

Where APC intends to pick their candidate from in 2024 will influence PDP's decision.

Hahaha more frustration on your head because you once said before 12Pm Obaseki will be address as former Governor but today nko your candidate write his own history as the first governorship candidate to be defeated under both party within cycle of four years.

Leave that for then

Uromi man is the next governor