Dead or alive? Repressed and depressed by parents or not? These are the controversial queries that filled the social media airwaves after the mysterious suicide action taken by Aisha Omolola, a 300 level student of Ahmadu Bello University, Zaria in her apartment at Samaru, Kaduna State.

Omolola was said to have committed suicide by drinking insecticide. She also reportedly dropped a note, stating why she took her life. According to the note, she wrote that her family should be held responsible for her suicide, especially her mother and father. She said the duo made life miserable for her and thus, killing herself was the only way she could save herself from the family’s frustration.

The letter reads below:

Just like I said, if I am no more, please hold my family especially my mum and dad responsible. I have tried to be the best I can be, stayed away from them just because they blame me for their mistakes and they can’t love, help and take care of me like their own. My mum has made life a living hell for me only because she is bipolar and frustrated; accusing me of being a witch, trying to kill her and being a cursed child even though my brother is responsible for my education and upkeep. The only thing she helps me with is my feeding money. I have gone out of my way to take care of my mum by giving her food and money but I still end up being her problem. My brother can’t stick to his promise anymore because he feels I am not his responsibility and I have my own family. I hope and believe that now that I am gone, it will bring them relief and happiness.

I am so sorry Collins, I had to leave you this way, Maryam Olayemi you have [been] more than a bestie to me. I am also sorry to all my friends and well wishers, I love to be happy but I’m nothing but a broken child. I don’t believe in God anymore, cos I can’t see my purpose anymore. I love you all so much.

When the news of the ABU student’s suicide made headlines, most Nigerians condemned the act. However, there are still some questions surrounding her demise left unanswered.

Did Aisha Survive the Suicide Mission?

Few days after reactions followed Aisha’s suicide action, it went viral on social media that she survived the attempt to commit suicide. The source of the rumour is traceable to the post on the Facebook page of Ahmadu Bello University, Samaru, Zaria. The post, which has more than a thousand shares and likes have made many Nigerians wonder whether she really survived her suicide mission.

However, the picture attached to the Facebook post, showing Aisha in the hospital receiving treatment is the first fact that falsifies the rumours. This is because the said picture was posted on Twitter sometime in October 2018, when Aisha was said to have had an accident.

The rumour was further falsified by eye-witnesses who witnessed how Aisha died and was buried. Audu Abdulqudus, a recent graduate of Ahmadu Bello University, Zaria and close friend to Aisha affirmed that he was among many others who were present at her funeral on the same day she committed suicide.

“I was the main friend that carried her dead body the very day she died at the Jamaa hospital in Samaru. I and her [best friend’s father], Mr AbdulGaniu with two policemen took her to the Ahmadu Bello University Teaching Hospital mortuary.

“I was called by Maryam Salami, Aisha’s childhood friend on Thursday evening towards 4:00pm. So, it was Maryam that now told me about the mum telling her that they were at the mortuary and they wanted to go and bury her that very evening on Thursday.

When contacted, Maryam Salami, a childhood friend of Aisha confirmed the death of her bosom friend, adding that Aisha’s death was mysterious. “We don’t know what to say. That’s how God planned her own death; let’s just put it that way,” she said.

Also, one Ruth Omole who was at Samaru hospital where Aisha gave up the ghost affirmed that Aisha did not survive the incident.

What to Note on the Suicide Note

The note left by Aisha about the cause of her suicide has created lots of controversies; there seems some mysterious issues thematically in the note. The impression generally created in the letter was that Aisha’s parents frustrated and repressed her so much that they made her “not to believe in God anymore”, most especially her mother.

As indicated in the note, Aisha frowned at how her mother so much rejected and dejected her while she was alive. According to the note, she (her mother) would blame her for everything and even called her a witch.

Though all efforts to reach any of her parents proved abortive, the deceased’s childhood friend, Maryam Salami, first confirmed that Aisha was the original author of the letter. “Aisha wrote that letter. That’s her handwriting,” she affirmed. She, however, added that the interpretation of the note could best be conveyed by its author.

“Half of what she said could be true and could not be true. It’s a personal issue and we should leave it personal. In that letter, she said something that has to do with herself and her mother or people around her. We shouldn’t interfere. That letter said a lot. I know what that letter means, but I don’t want to say anything. That letter should just be left. That letter is nothing. People should just let bygone be bygone. We should just pray for her and God should forgive all of us,” she said.

Were religious differences ever a barrier between Aisha and her parents? Salami said religion could not have been the apple of discord. This is contrary to what has been widely spread on social media. It was said that Aisha had been victimised by her parents just because she converted from being a Christian to a Muslim.

However, Salami, her friend said that could not be true, adding that Aisha was a person who was never religiously stable. She was a Christian today, Muslim tomorrow.

“Aisha converting from a Christian to a Muslim is nothing. That has never or had never been the problem because right from primary school, Aisha has been one person that it’s either she’s a Muslim today or she’s a Christian today,” she said.

“She (Aisha’s mother) has always loved her daughter and she feels she’s old enough to know what she wants. Religion has nothing, I mean nothing, to do with this. Aishat’s mother had nothing to do with Aishat converting from this to that. The mom has no problem with Aisha being a Muslim. Her mother has never interfered in it,” she added.

Really, the reason behind the deceased’s suicide seems to be very mysterious. While the note portrays that she had no good relationship with her parents, especially her mother, her tweets proves contrary. On December 18, 2018, Aisha wrote on her Twitter page, praising and praying for her ‘lovely mother’.

“Ya Allah, bless my mom…keep her for me, give me the strength, ability and ways to be a blessing to her. Let me be the reason behind her smile and happiness. Please give her long life to reap the fruit of her labour. I love you mom. My Woman My Everything,” she tweeted.

The question is: What could have happened between Aisha and her parents that could have warranted her to commit suicide within the aforementioned short period of time?

Before Suicide, Who was Aisha?

Minus the suicide reportedly committed by Aisha, her friends described her as being friendly, nice and generous.

As her childhood friend, Maryam also described Aisha as someone who was crazy but nice and friendly.

“She’s crazy. She has her ups and downs just like any other person. I’ve loved her for who she is. No matter how much she annoys me, I’ll still go there and still look for her. She’s always there to listen to people but she doesn’t share any of her feelings or anything that is going on within her,” she added.

Before her death, Aisha appeared to have enjoyed her stay on earth. On December 11, 2018, she tweeted: “God I thank you for the gift of life. Thank you for giving me reasons never to give up on life.”

Also, on October 1, 2018, after she survived an accident, she posted on Twitter, giving thanks to God for her survival and praying for long life.

“For a moment, I thought I was gonna die. In fact, I started saying my last prayers asking mom to pray for me too but ALHAMDULILLAH. I am a witness of Allah’s mercy and by HIS Grace I shall live to see more healthy years,” she posted. 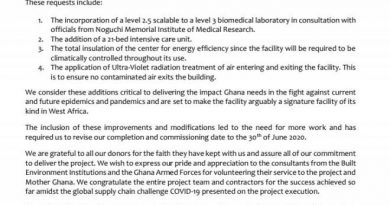 *BREAKING* : Information reaching us from the office of the Edo state Ministry of Lands and Surveys is that the piece of land measuring 1000feet by 2000feet along the Benin Abuja Expressway upon which Mr Adam's Aliyu Oshiomole built his mansion belongs to the Govt.
Upon further investigation into the documentation for the purported parcel of land reveals that the land is for the Government secondary school for Boys proposed by former Governor Ambrose Folorunsho Alli.
More details will be given as events unfold....fight don start ooh!! Politics. ... See MoreSee Less

Abeg oh if this is true . More demolition

This man is a snitch, a granite caste fickle nuisance and a time serving politician.... All he does, is his sordid interest against the collective progress of Edo nation. ... See MoreSee Less

Nations who have recovered fasted quarantined the fastest. The ruling elites won’t allow that here

Who Is Nurse Mildred Ratched? Everything to Know About the One Flew Over The Cuckoo’s Nest Villain