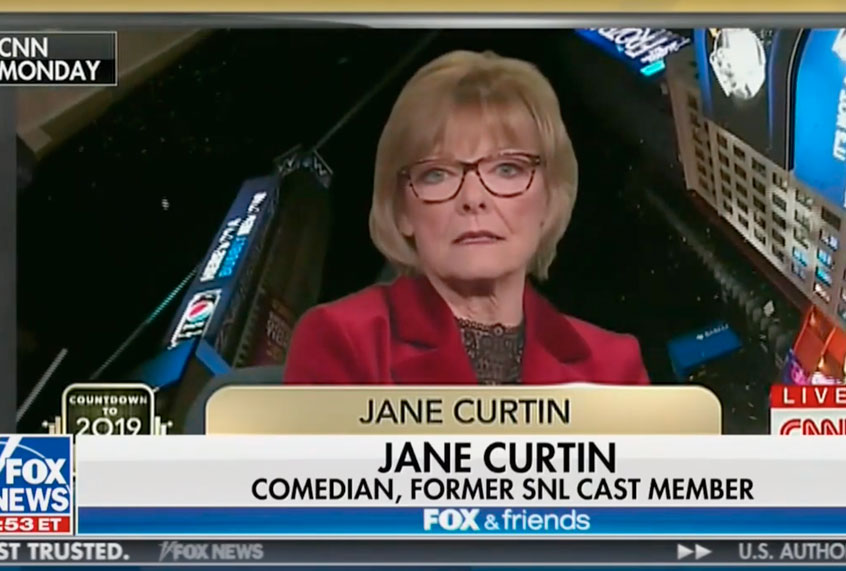 After actress and comedian Jane Curtin vowed to “make sure the Republican Party dies” in 2019 during a New Year’s Eve broadcast on CNN, “Fox & Friends,” President Donald Trump’s favorite morning show, invited a purported humor expert on the show to assert that Curtin’s quip” wasn’t a joke” and that she truly hopes to kill members of the Republican Party this year.

On their first morning back from holiday break, co-host Steve Doocy described the joke, which he did not find funny, as a resolution “about killing Republicans,” while comedian Michael Loftus called the line “absolutely terrifying, really terrifying.”

“She meant it,” Loftus, the former host of a conservative satirical show, said. “That wasn’t a joke. That makes you glad that there’s a three-day waiting period on guns. Jane Curtin has lost it. She’s completely not funny.”

“Here’s what I think,” he continued. “This is what the left has been thinking for a long, long time: ‘It would be so much easier if there was no opposition.’ They have no message, they can’t win a debate, so it would just be easier if all the Republicans were dead and gone. It’s terrifying!”

Asked whether he thinks Curtin is “just being honest,” Loftus replied, “I think Trump has them so frustrated, the mask is off.”

Loftus’ comments came after the Curtin, the Saturday Night Live alum, appeared on CNN late Monday with other celebrities to share comedic resolutions. Actor Terrence Howard said he hoped to “break down the entire economic global infrastructure,” while controversial actress and writer Lena Dunham said she’d like to “kiss more gay men on the lip consensually.”

Twitter responses to Curtin’s quip about her desire for the demise of the GOP ranged from “SAME!” to the sarcastic “stay classy, CNN,” and prompted criticism about liberal hypocrisy.

“The people tweeting how much they love Jane Curtin for saying this will be on back on Twitter by the end of the week crying about hateful rhetoric from the right,” one person wrote. “Pathetic cycle of hypocrisy every single day from these people.”

Scientists puzzled by massive star that vanished without a trace