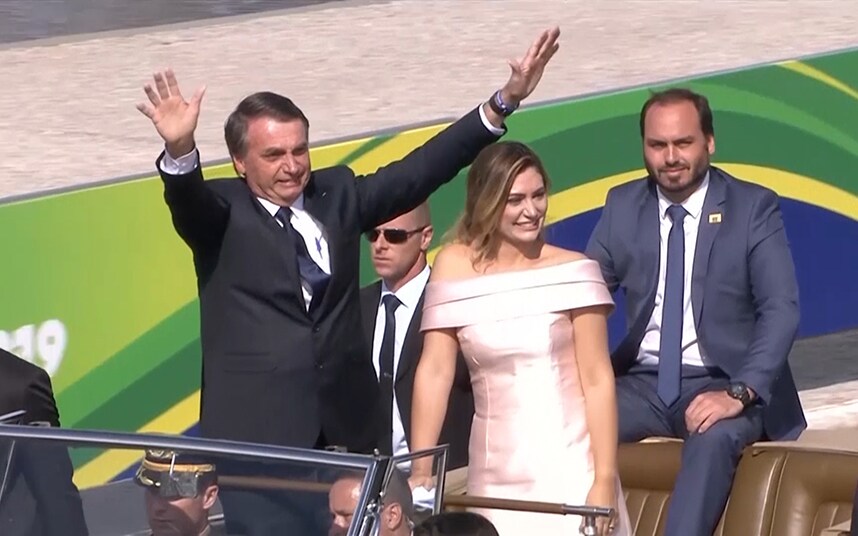 Jair Bolsonaro, Brazil’s new president, promised to work closely with Donald Trump “under God’s protection” to bring prosperity to both countries as he was sworn in last night.

The far-Right nationalist, known as the “Trump of the Tropics”, vowed to crack down on corruption and violent crime in a long-awaited speech following his shock election in October.

The 63-year-old former Army captain has pledged to tackle street crime by arming civilians and believes police officers who kill suspects should be decorated rather than investigated.

“I will work tirelessly so that Brazil reaches its destiny,” said Mr Bolsonaro, the latest populist to exploit anti-establishment fury. “My vow is to strengthen Brazil’s democracy,” he added, as he took power in Latin America’s largest country.

Crowds of supporters, many with the Brazilian flag draped around their shoulders and with faces painted yellow and green, the national colors, gathered before the Planalto palace, where Brazil’s new leader was presented with the presidential sash.

Congratulations to President @JairBolsonaro who just made a great inauguration speech – the U.S.A. is with you!

Mr Bolsonaro is a hugely controversial figure in Brazil due to his track record for making racist and sexist comments, and displaying nostalgia for the country’s military dictatorship.

He has spoken of how he would punch a gay couple if he saw them kissing in public, and has admitted he would “be incapable of loving a homosexual child.”

He is currently appealing a fine he received for telling a female politician during a heated row that “I wouldn’t rape you because you don’t deserve it.”

And in a 1999 TV interview, Mr Bolsonaro said he yearned for the days of the 1964-1985 military dictatorship which killed hundreds, adding: “I’m in favour of torture. You know that. And the people are too.”

Mr Bolsonaro also hopes to realign Brazilian diplomacy towards the interests of President Donald Trump, who sent Secretary of State Mike Pompeo to the inauguration ceremony.

After the ceremony, Mr Trump congratulated the Brazilian president on his  “great inauguration speech,” adding “The US is with you!”

Responding shortly after on social media, which Mr Bolsonaro uses to sidestep the mainstream press, Mr Bolsonaro said: “Dear Mr President, I truly appreciate your words of encouragement. Together, under God’s protection, we shall bring prosperity and progress to our people!”

In scenes reminiscent of Mr Trump’s own inauguration ceremony, the crowds were far smaller than expected according to eyewitnesses.

And in a clear sign of that diplomatic shift, Mr Bolsonaro plans to move the Brazilian embassy in Israel from Tel Aviv to Jerusalem, breaking with Brazil’s traditional support for a two-state solution to the Palestinian issue.

During the campaign trail, Mr Bolsonaro was transformed from a fringe eccentric who was often the butt of the other candidates jokes’ into a right-wing firebrand who surged in the polls and thrived on controversy.

At a rally in September he was stabbed in the stomach by a mentally ill man, losing 40 per cent of his blood and undergoing major surgery. The incident saw his public support rise even further, but now has to wear a colostomy bag.

He is hugely popular among Brazil’s conservative voters, in particular Christian evangelical churches who are drawn to his strong opposition to abortion and desire to remove sex education from schools.

His vow to follow Mr Trump’s example and pull Brazil out of the Paris Agreement on climate change has concerned environmentalists, as well as his plans for a hydroelectric dams in the Amazon.