President Muhammadu Buhari on Friday approved the appointment of four non-executive directors for the Central Bank of Nigeria.

The Permanent Secretary (General Services Office), Office of the Secretary to the Government of the Federation, Olusegun Adekunle, disclosed this in a statement made available to journalists.

Adekunle said the appointments were for initial period of four years with effect from June 7.

The President also appointed Prof. Abdullahi Yusuf as the Chief Medical Director of the University of Ilorin Teaching Hospital for an initial period of four years with effect from June 19.

He also appointed Dr. Pauline Ikwugbu as the Provost of the Federal College of Education, Eha-Amufu, Enugu State for and initial period of four years with effect from March 19.

The President renewed the appointment of the Rector of the Federal Polytechnic, Unwana Afikpo, Ebonyi State, Dr. Ogbonnia Ibe-Enwo, for second and final term of four years with effect from August 7.

He also renewed the appointment of the Rector of the Federal Polytechnic, IIaro, Ogun State, Olusegun Aluko, for second and final term of four years with effect from September 25.

Prof. Sunday Onohaebi also got his appointment as the Rector of the National Institute of Construction Technology, Uromi, Edo State renewed for second and final term of four years with effect from July 25.

“Mr. President expects the new appointees to regard their appointments as a call to national service and to carry out their responsibilities with uprightness, diligence and prompt response to the yearnings of the public,” the statement read.

Nigeria: Obaseki – My Election a Battle Between Light and Darkness – AllAfrica.com 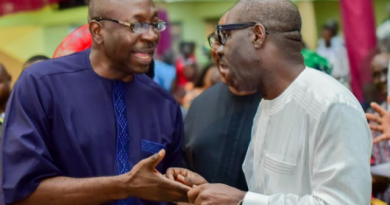 How to Be a (Glossier Body) Hero, According to WNBA Star Natalie Achonwa