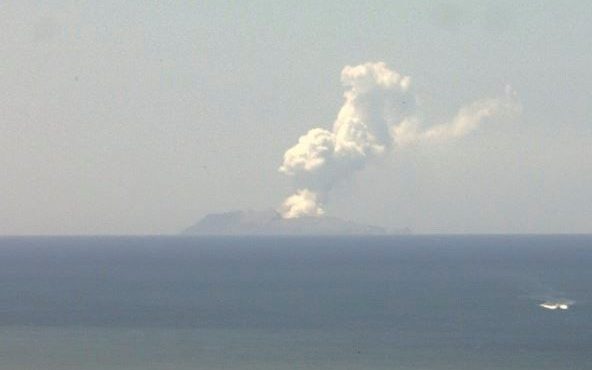 A volcano has erupted suddenly on New Zealand’s White Island, about 30 miles from the east coast of North Island, provoking fears for tourists in the area.

Local media are reporting people were injured after the island in Bay of Plenty erupted, sending massive plumes of steam and debris into the air. About 100 people are believed to have been in the vicinity and Jacinda Ardern, New Zealand’s Prime Minister, says some are unaccounted for.

“It is very much an evolving situation and of course all our thoughts are with those affected,” she told reporters in Wellington.

The volcano on White Island is New Zealand’s most active cone volcano.

White Island is a small, uninhabited island located northeast of the North Island town of Tauranga. The island is regularly visited by small groups of tourists. Cameras providing a live feed from the volcano showed more than half a dozen people walking inside the rim at 2:10pm local time (1.10am GMT) before images went dark when the eruption occurred minutes later.

The local mayor said she feared there had been “injuries” in the eruption.

“I’ve got limited understanding at present other than there’s been an eruption, that there have been some people who were on the island at the time, who have had some injuries,” Whakatane mayor Judy Taylor told Radio NZ.

“I’m not sure of the extent or nature of those injuries… emergency services are all waiting for them to be returned from the island so they can attend to them.”

New Zealand’s national emergency management agency said: “A volcanic eruption is occurring at White Island and is hazardous in the immediate vicinity of the volcano.”

A volcanic eruption is occurring at White Island and is hazardous in the immediate vicinity of the volcano.

A witness told the New Zealand Herald that he was fishing with some friends about 40km from the island when he saw dark smoke erupting before 2.15pm.

“I looked over and saw a burst of steam coming up,” Dan Harvey said. “There was nothing above the island at that time. It was just clear blue sky. It was unusual to see it go from nothing to steam erupting out of it.

“It was almost like a mushroom cloud … the steam was expanding and getting bigger.

“I knew it was odd because there was nothing above it. Often it’s doing this small continuous release of steam. But it wasn’t doing anything then all of a sudden this massive amount of cloud comes out.”

Harvey said it’s still erupting steam but it was nothing like it was when it first erupted. He added that it happened so quickly and fast that if there were anyone on the island it wouldn’t be good.”

Two arrested over stabbing at cinema in Nottingham