Former Vice President, Atiku Abubakar, on Tuesday, appeared at the registry of the High Court of the Federal Capital Territory in Maitama, Abuja, to sign and file his deposition in support of the N2.5bn libel suit which he instituted against President Muhammadu Buhari’s Special Assistant on Social Media, Lauretta Onochie, earlier in June this year, according to a report by PUNCH.

Photographs of Atiku with his lead counsel, Mike Ozekhome (SAN), and others in the legal team were sent to journalists on Tuesday.

In one of the pictures, Atiku was seen seated while holding a pen above a white paper with Ozekhome bent over the table beside him.

“The former Vice President was physically at the Registry to sign his witness deposition (on oath) before the Commissioner for Oaths, on the case he instituted against Lauretta Onochie.

“The Waziri is claiming amongst others, the sum of N2.5bn only from the Presidential Assistant on Social Media, as general, aggravated, punitive and exemplary damages against her.

“Atiku is claiming this sum from her for her defamatory story published on her twitter handle and Facebook page, in which she stated that Atiku was on the UAE watch list.”

Atiku had on June 26, 2019, instituted the suit against Onochie for her alleged libellous tweet against him via her Twitter handle on May 7, 2019.

The tweet allegedly suggested that Atiku was on the watch list of security operatives in the United Arab Emirates and had travelled to shop for terrorists in the Middle East.

Denying the allegations in the said tweet, Atiku said it was “politically orchestrated” “solely to cause maximum damage” to his “high reputation” while challenging “the purported victory” of  Onochie’s boss, President Buhari in the last presidential election at the Presidential Election Petition Tribunal.

Atiku had through a May 14, 2019 letter signed by Ozekhome, demanded from Onochie an apology, a retraction of the said post and a payment of N500m compensation to him  “to assuage” the damage allegedly done to him by her social media post.

He also threatened to sue her should she fail to accede to the demand “within 48 hours”.

Justifying his suit, Atiku stated in his claim accompanying his suit, that rather than show “remorse by retracting her earlier publication”, she further, on May 20, made “another derogatory publication and also published same online in the social and other print media” against his person.”

I’ll Rather Congratulate Buhari Openly Than Visit Him At Night, Says Wike

Your dreams are spiritual weapons, don’t trivialize them – Prophet Fufeyin 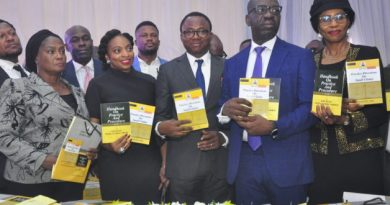