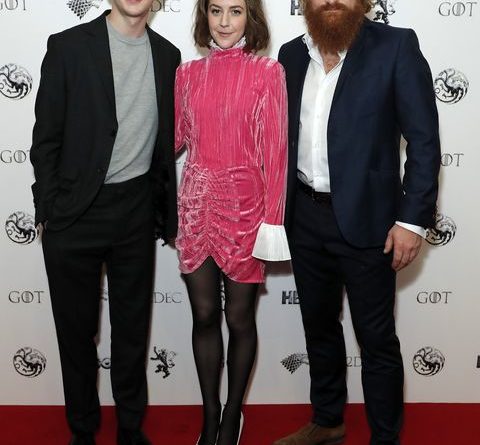 It’s been 186 days since the Game of Thrones finale aired, leaving the fandom miffed for weeks and launching a petition to “Remake Game of Thrones Season 8 with competent writers.” Apparently, the Thrones cast actually shot an alternate ending—but we’ll never see it.

Kristofer Hivju, who played Tormund Giantsbane in the Emmy-winning series, confirmed this to Metro at a Game of Thrones event in London earlier this week. Hivju explained that the ending the cast shot was “mostly for fun, but I don’t know if I’m allowed to tell you about that.” Metro pushed for more answers but Hivju remained mum, reiterating how “fun” it was to shoot.

The GoT series finale ended in ways no one saw coming. After eight seasons and many, many bloodbaths, Bran was named the King of Westeros, Jon Snow (Kit Harrington) killed his lover/aunt Daenerys Targaryen (Emilia Clarke), Sansa Stark (Sophie Turner) was crowned the Queen of the North, and Arya (Maisie Williams) left Westeros behind to embark upon her own journey, leading many fans to believe she could be getting her own spinoff series. That dream was quickly shut down.

Following the season 8 backlash, George R.R. Martin, the author of the A Song of Ice and Fire book series that inspired the show, wrote a lengthy blog post thanking fans for their support and explained that GoT showrunners David Benioff and D.B. Weiss only had six hours to work with for the final season.

“I am working in a very different medium than David and Dan, never forget. They had six hours for this final season. I expect these last two books of mine will fill 3000 manuscript pages between them before I’m done…and if more pages and chapters and scenes are needed, I’ll add them,” he explained. He added that his books will also explain what happened to those who died in the series and introduce new characters.

“Book or show, which will be the ‘real’ ending? It’s a silly question. How many children did Scarlett O’Hara have?” he continued, referring to changes made to the Gone with the Wind film from the book. “How about this? I’ll write it. You read it. Then everyone can make up their own mind, and argue about it on the internet.”

The Force, explained and what its patterns could mean for “Rise of Skywalker”

*PDP AND PROPAGANDA OF DESPERATION*

Chris Nehikhare and his puppeteer the Peoples Democratic Party, PDP have gone to town with a spurious and irresponsible allegation that the National Campaign Council of the All Progressives Congress, APC has approached NEXIM Bank for a loan of $500 million, ostensibly to fund the Edo Governorship campaigns.

This criminal and libelous allegation would have been laughable if the issues involved were not so weighty. Any person who is familiar with the basic rudiments of financial transactions by Banks, knows that no bank worth its operating licence would provide a facility of that magnitude without documentation and a long paper trail.

We therefore challenge Chris Nehikhare and his paymasters to publish all available evidence in their possession to substantiate their claim, or shut up. Of particular interest to the public would be the named applicants for the loan facility. It is becoming increasingly obvious to all and sundry that faced with the reality of a resounding and humiliating defeat on September 19th, the PDP and its defective merchandise are looking for a face saving excuse to explain their impending and inescapable political demise.

Nigerians and the general public are too discerning to be hoodwinked by the usual misinformation and disinformation that is the hallmark of PDP propaganda. Since Godwin Obaseki has chosen to open Edo State treasury to those that no less a person than Governor Nyesom Wike described as, "tax collectors", the PDP vultures should exploit and enjoy the largesse of Obaseki's desperation for a second term. Their time is fast running out.