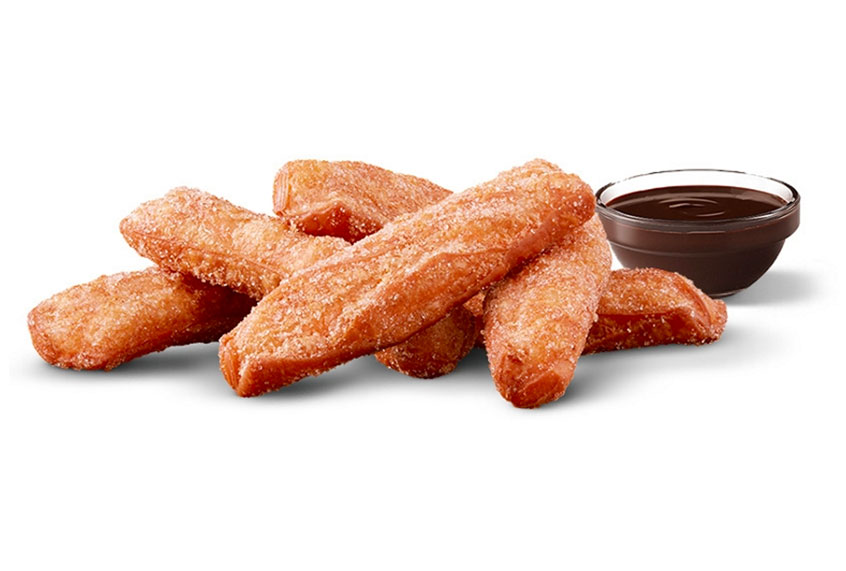 Envision that now ubiquitous “woman yelling at cat” meme. On one side, Real Housewife Taylor Armstrong screams “churro.” In response, the unaffected cat snarls “ McCafé Donut Sticks.” This is all I could think of when I first watched the new commercials for the product, a series of clips showing fried tubes of dough, dusted with cinnamon sugar, slow-motion swirling into a pod of dark melted chocolate – like an episode of “Chef’s Table” made on a fast-food budget.

I cut the cable cord late last year, so I was blissfully unaware of the Donut Stick — released in February — until I saw this commercial announcing its return for the holiday season.

“We looked at several donut shapes, tested a variety of doughs and even worked to get the amount of cinnamon sugar just right for the recipe,” said Linda VanGosen, McDonald’s Vice President of Menu Innovation, in a press release at the time. “We are thrilled to be making breakfast at McDonald’s even more delicious by introducing Donut Sticks.”

Soon after seeing the commercial, during the inky pre-dawn hours of the first November day that truly felt like winter, I went through the McDonald’s drive-through and retrieved an order of six sticks for $1.39. I pulled into a parking spot, heat blasting and tentatively dipped one into the chocolate while it was still hot. The dough had a light ridges and a distinct crunch — less puffy than a yeast doughnut and less dense than a cruller — that was enhanced by the cinnamon sugar crystals. They were less soggy than Dunkin’s comparable Donut Fries. The chocolate sauce, while a touch goopy, had a really pleasant bitterness to it.

Proust had his “madeleine moment,” and sitting in that McDonald’s parking lot I likewise had visions of Churrería La Coneja — a little churro shop in Lexington, Kentucky — where I’d watch the cooks fry tubes of dough at lightning speed to feed the winding line of late-night (often buzzed) customers. It felt like taking the mask off a Scooby-Doo villain: “All right, Donut Stick, let’s see who you really are. Mr. Churro?!”

Granted, the line between doughnut and churro is a little nebulous, as is the churro’s history. One story says that Portuguese sailors discovered youtiao, fried flour sticks eaten for breakfast, in Northern China. That version is salty, and they decided to make it sweet. From there, it migrated to Spain.

Generations later in America, the food has become a theme-park staple and a reason to visit the Costco concession stand. Trader Joe’s has “churro bites”; for a limited time, IHOP served Mexican Churro Pancakes, a tall-stack of buttermilk pancakes topped with whipped cream and mini-churros; rumors of a secret churro-flavored Oreo are found in the dark corners of the internet.

Merriam-Webster defines the dish as “a Spanish and Mexican pastry resembling a doughnut or cruller and made from deep-fried unsweetened dough and sprinkled with sugar.” According to the dictionary, doughnuts and churros are similar, nearly indistinguishable. So why should I actually spend time parsing what we call these fast-food fried dough sticks?

On a base level, I’m secretly delighted by the inane food questions that sometimes emerge when people on social media or Reddit are trying to be pithy. Is cereal a soup? Is a hotdog a sandwich? (For what it’s worth, it was determined that legally a burrito is not).

But something nagged me about this product, much in the way I’m nagged in this political environment by the phrase “Taco Tuesday” or memories of watching drunk white frat boys slosh around a state university campus, drunk on Red Bull margaritas, on Cinco de Mayo 2016.

While Mexican and Latin American immigrants continue to be denigrated, their contributions, especially their culinary contributions, are simultaneously bastardized and commercialized. This process of separating foodways from their culture or point of origin doesn’t happen overnight, but it breeds a staggering level of disconnect  — though I guarantee you that there is someone out their who has chanted “Build that wall!” then later indulged in a Crunchwrap Supreme.

So, maybe I’m overthinking those six tiny, crispy sugar-powdered tubes. And I get it if you’re thinking, “Ease up. No one can own fried dough.” You’re right. And churros may be too far gone to save from the fate of “margs” and Cinco de Mayo, but the idea left a bad taste in my mouth.