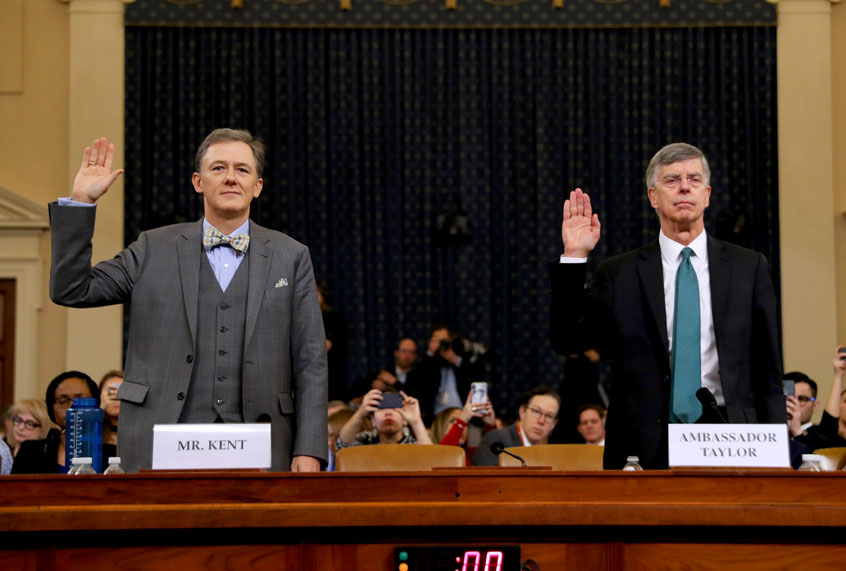 In his opening remarks on the first day of public impeachment hearings, House Intelligence Committee ranking member Devin Nunes, R-Calif., a hardcore Donald Trump lackey, tried to sell Republican claims that the president is the victim of a Democratic conspiracy. Nunes declared, “After the spectacular implosion of their Russia hoax on July 24, in which they spent years denouncing any Republican who ever shook hands with a Russian, on July 25 they turned on a dime and now claim the real malfeasance is Republicans’ dealings with Ukraine.”

He then tried to argue that the Democrats are trying to make Americans “forget” about the lengthy investigation into the Trump campaign’s connections to a Russian conspiracy to interfere with the 2016 election, and that Ukraine is just a shiny new object.

Over the next few hours, however, what became quite clear was that the opposite is true: The Ukraine scandal is inextricably entwined with the Russia scandal. Both scandals keep pointing at the same conclusions: Trump really loves cheating in elections and, for some reason, he really loves backing up Russian President Vladimir Putin, even when doing so undermines American interests.

The testimony from Ambassador Bill Taylor and George Kent, a deputy assistant secretary at the State Department, covered a lot of ground that was previously exposed in closed-door depositions earlier this fall. It reinforced the extent of the campaign by Trump and his lawyer, Rudy Giuliani, to use military aid as leverage to extort Ukrainian President Volodymyr Zelensky into publicly backing Trump’s conspiracy theories about the Democratic leadership and former Vice President Joe Biden.

There was also some new information that highlighted how deeply involved Trump was personally in the extortion campaign. Taylor told of his staff member overhearing EU ambassador Gordon Sondland on the phone with Trump, clearly discussing the extortion scheme. Afterwards, Taylor said, the staff member asked Sondland “what President Trump thought about Ukraine.”

“Ambassador Sondland responded that President Trump cares more about the investigations of Biden, which Giuliani was pressing for,” Taylor said.

This new information is interesting on its own, but in the larger context of the hearing, it was particularly powerful. Throughout the hearing, Kent and Taylor painted a damning picture of Trump’s bewildering ill will toward Ukraine, a country they portrayed as as struggling to build democracy in the face of corruption and Russian military incursion. (Kent compared Ukraine’s independence fighters to the Minutemen of the American Revolution.) Trump, it seems, didn’t target Ukraine for a shakedown purely for opportunistic reasons. He seems, in fact, to hold that nation in contempt, and his blackmail of Ukraine wasn’t just self-serving, but malicious.

Under questioning by House Democratic counsel Daniel Goldman, Taylor, in almost bewildered tones, said that Trump “had a feeling of having been wronged by the Ukrainians,” and apparently seemed to believe that feeling justified his nearly-successful efforts to force a reluctant Zelensky to publicly back Trump’s conspiracy theories about Biden and other Democrats.

Needless to say, this is weird. Ukraine has never done anything to Trump to merit such personalized loathing. But, as extensive reporting has shown, Trump’s enmity towards Ukraine appears to have deliberately stoked by a number of conservative allies, including his now-imprisoned former campaign manager, Paul Manafort, Fox News host Sean Hannity and, of course, Giuliani. These men, using Fox News and other methods, spent years stoking Trump’s paranoia and pushing a conspiracy theory that it wasn’t Russia that had interfered with the 2016 election on Trump’s behalf, but rather Ukraine that had done so on Hillary Clinton’s behalf.

This was also one of the conspiracy theories Trump wanted Zelensky to support in public as part of his extortion scheme.

This conspiracy theory benefits Putin in two ways. First, Putin has consistently denied that his government had any role in interfering with the U.S. presidential election in 2016. Second, it helps demonize the Ukrainian government and undermines its support in the United States. As testimony from Kent and Taylor made clear, Putin clearly hopes that U.S. support of Ukraine will weaken so that he can escalate his war against Ukraine.

In fact, as the hearing made clear, at every turn, Trump’s behavior benefited not just himself but Putin, whether by coincidence or intent. Withholding military aid weakened Ukraine’s hand in potential peace negotiations with Russia. But Ukraine would also have been weakened by giving Trump what he wanted in exchange for the aid, as Taylor testified.

“The Russians, as I said at my deposition, would love to see the humiliation of President Zelensky at the hands of the Americans,” Taylor noted in his statement.

It was a chilling reminder that there are no limits for Republicans when it comes to defending Trump. In order to defend their embattled orange president, Republicans went on live TV and threw the entire nation of Ukraine under the bus. Until now, Ukraine has enjoyed strong U.S. support, on a bipartisan basis, for its continued independence from Russian rule or Russian domination. But because of Trump’s idiotic conspiracy theories and his resulting crimes, all that is under threat.

Putin must be thrilled.

At the end of his opening remarks, Taylor discussed his vision of Ukraine’s future: “Young people in a young nation, struggling to break free of its past, hopeful that their new government will finally usher in a new Ukraine, proud of its independence from Russia, eager to join Western institutions and enjoy a more secure and prosperous life.”

One clear story comes out of the first day of impeachment hearings on Donald Trump: His actions threaten that vision of Ukraine. There can be no doubt that Trump took his actions for personal gain, because he wanted to cheat in the 2020 election and demonize his opponent in the 2016 election. But as with so many things Trump has done, his actions also benefited Putin.

The Trump-Russia scandal isn’t over. After today, it’s clear that it’s ongoing. As Speaker of the House Nancy Pelosi said to Trump in October, “All roads lead to Putin.”