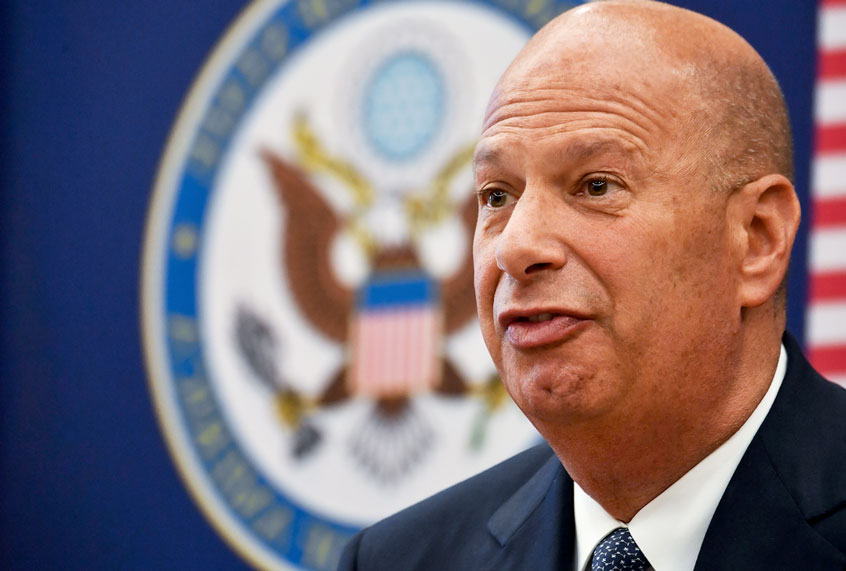 According to several legal experts, the revised testimony on the Ukraine scandal by Gordon Sondland, the U.S. ambassador to the European Union, is highly damaging to President Trump. In his new statement, Sondland admitted that Ukrainian President Volodymyr Zelensky knew he U.S. would withholding military aid until his country granted Trump’s request for an investigation of the company that employed Hunter Biden, the son of former Vice President Joe Biden. This is a crucial piece of evidence suggesting that the U.S. president that committed a serious ethical violation, and perhaps a crime.

Harvard Law professor Laurence Tribe told Salon by email that Sondland’s statement “contributes to the overwhelming evidence that President Trump abused his power and engaged in bribery and extortion by illegally conditioning the military aid Congress had voted for Ukraine upon President Zelensky‘s willingness to help him in the 2020 election by announcing an investigation into Hunter Biden.” He continued:

I wouldn’t describe Sondland’s correction as the decisive piece of evidence, but rather as contributing to a mosaic that unmistakably demonstrates high crimes and misdemeanors on the part of the president.

The most important new information that Sondland conveyed in his corrected version was that President Zelensky was fully informed well in advance of the infamous phone call why the aid was being withheld. The effort by Trump and his supporters to argue that there was no quid pro quo becomes all the more untenable in light of that information.

“Sondland’s reversal of his position on whether there was a quid pro quo with Ukraine, which is confirmed by other witnesses, is a smoking gun in the impeachment investigation,” Lichtman said. “It’s now time to stop talking about ‘quid pro quo’ and start talking about the serious crimes that Trump has likely committed, including bribery (an explicit ground for impeachment under the Constitution), extortion, felony violation of the campaign finance laws and conspiracy against the United States.”

David Priess, chief operating officer of Lawfare and author of “How To Get Rid of a President: History’s Guide to Removing Unpopular, Unable, or Unfit Chief Executives,” said that Sondland’s testimony wasn’t a smoking gun — but only because the smoking gun has existed for a while.

“Sondland’s revision of his testimony is not a ‘smoking gun’; we already had a smoking gun in the quasi-transcript of the president’s phone call with the Ukrainian leader,” Priess explained. “There is no substantive presidential defense against what the transcript shows that Trump said, the core of which he reiterated publicly — and what witnesses have corroborated in their testimony about the partisan-politics purpose of the quid pro quo.” Priess argued that the reason Sondland’s testimony is “substantively important” is that “he’s the link to the president, with whom he communicated directly, so it fleshes out the picture of the president’s actions.”

Barbara McQuade, a former U.S. attorney for the Eastern District of Michigan, who was dismissed by Trump along with many other U.S. attorneys in 2017, told Salon that “Sondland’s testimony is damaging because he confirms that Trump was using national security as leverage to coerce a foreign government to interfere in our election.”

She added, “The way Sondland went about it makes this testimony even more damaging. By first denying knowledge of a quid pro quo, and later changing his story, Sondland creates a fair inference that he lied because he knew how damaging that fact was to Trump.”

Republicans have had a difficult time explaining away Sondland’s testimony. White House counselor Kellyanne Conway attempted to do so on Wednesday by arguing that Sondland saying “I presume” meant that “he doesn’t know if the aid was held up — or why it was held up. And he still doesn’t know.”

The House impeachment inquiry began in September after the release of a whistleblower’s report suggesting that Trump had attempted to coerce Ukraine into opening an investigation into Hunter Biden’s company. Trump’s apparent purpose was to lend credence to discredited allegations that Joe Biden had pushed for the resignation of a Ukrainian prosecutor to protect his son from criminal charges. There is no evidence that either Biden did anything illegal. The prosecutor in question, Viktor Shokin, was pressured into resigning because Western leaders believed he had failed to crack down on corruption.

In a White House press conference last month, acting chief of staff Mick Mulvaney said that the president engages in “quid pro quo” with other nations all the time for political purposes and that people should “get over it” because “there’s going to be political influence in foreign policy.” Although Mulvaney later tried to claim that he didn’t mean what he said, the Trump campaign had T-shirts printed with the expression “Get over it,” according to USA Today. It seems plausible that the administration’s initial plan was to admit what Trump did and then to taunt his enemies about it.

Of course, the report by former special counsel Robert Mueller revealed that the Trump campaign had, at the very least, encouraged the Russian government to release damaging materials about Hillary Clinton. Last month the president tried to get Chinese officials to dig up dirt on Hunter Biden’s business efforts in that country, saying, “If they don’t do what we want, we have tremendous power.”

All the way back in July 2016 Trump openly solicited political aid from foreign governments, publicly asking the Russian government to find Clinton’s supposedly missing emails: “If you’re listening, I hope you’re able to find the 30,000 emails that are missing. I think you will probably be rewarded mightily by our press.”

How dynamic is your retirement spending strategy?

What would Jesus boo? As Christians, we should be troublemakers too

How to differentiate coronavirus vaccine news from hype