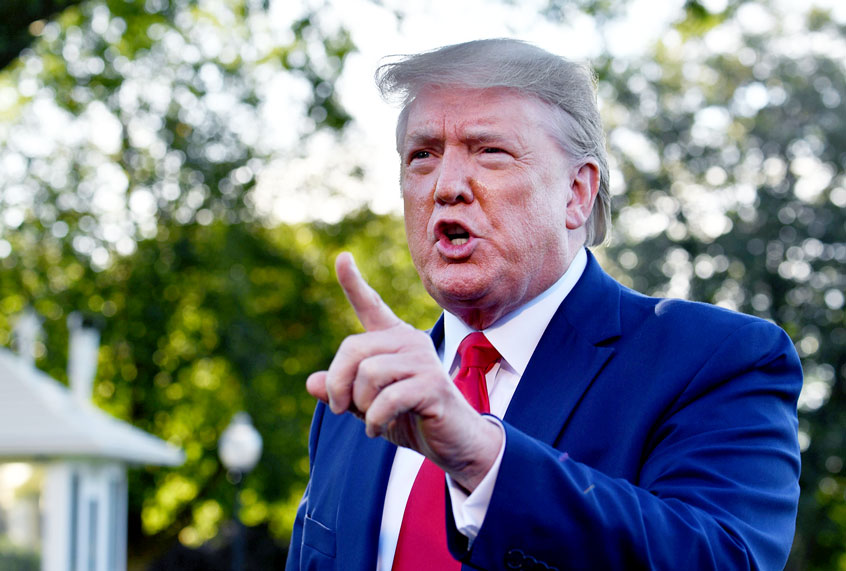 President Donald Trump claimed to be the victim of “political harassment” when he was ordered to pay $2 million to charities after admitting to misusing funds raised by his foundation to pay for presidential campaign fees, business debts and even a portrait of himself.

A New York state judge ordered Trump to pay $2 million to nonprofit groups as part of a settlement in a lawsuit filed by New York’s attorney general accusing the Donald J. Trump Foundation of misusing money that was supposed to go to charities,the New York Times reported.

As part of the settlement, the president, in an incredibly rare move, submitted a detailed admission of misconduct to the court. The president admitted that his foundation had funneled $2.8 million raised at a fundraiser for veterans in Iowa in 2016 to his campaign. He also admitted to using the foundation’s money to settle lawsuits involving his businesses. Trump also said he used $10,000 of the foundation’s money to buy a portrait of himself, which now hangs at one of his Florida properties.

The charity was forced to shut down just six months after the state alleged that it was “little more than a checkbook to serve Mr. Trump’s business and political interests.” The suit said that the state’s investigation found a “shocking pattern of illegality.”

The foundation itself received no donations from Trump between 2009 and 2015 and subsisted mainly on a $5 million donation from WWE owners Vince and Linda McMahon. Trump later tapped Linda McMahon for a Cabinet position before she left to fundraise for his re-election campaign.

The judge stopped just short of banning Trump from ever running another charity in the state but imposed restrictions on the president if he does try to form a new charitable organization. If Trump starts a new charity, he will be required to fill the majority of board seats with people who are not related to him, submit to audits and hire a qualified attorney,the Washington Post reported.

Despite admitting to wrongdoing to the court, Trump issued a statement on Thursday claiming that he was totally innocent and the victim of “political harassment” by Democrats in New York.

“I am the only person I know, perhaps the only person in history, who can give major money to charity ($19M), charge no expense, and be attacked by the political hacks in New York State,” he said.

Trump claimed that “every penny of the $19 million raised” went to “hundreds of great charitable causes” — even though he admitted to misusing nearly $3 million to advance his own interests.

Trump claimed to be the victim of “4 years of politically motivated harassment” by Democratic attorney generals who do not ‘acknowledge that we gave 100% of the funds to great charities.” Again, this is simply false, both based on multiple investigations and on the president’s own admission to the court.

“All they found was incredibly effective philanthropy and some small technical violations, such as not keeping board minutes,” Trump falsely claimed.

The judge in the case strongly disagreed.

New York Attorney General Letitia James also refuted Trump’s claim and called the settlement a “major victory” that she hoped would send a message to “those who would abuse charities for personal gain.”

“No one is above the law,” she added, “not a businessman, not a candidate for office, and not even the president of the United States.”

Philip Hackney, a former IRS lawyer who teaches charity law at the University of Pittsburgh, told The Post that the judge’s decision was a stunning rebuke of the president.

“That’s a pretty significant statement about a lack of trust of the president’s capabilities,” he said. “It’s truly astounding.”

Law professors to Congress: So impeach the MFer already