Borno State Governor, Babagana Zulum, says he is willing to negotiate
with some Twitter and Facebook users who are using his name on their
Twitter handles but warns that they have three days (from today) to
come forward to negotiate with him.

Zulum’s special adviser on public relations and strategy said in a
statement on Thursday (today) morning, “While Governor Babagana Umara
Zulum recognizes and appreciates those who make selfless efforts to
promote the activities of his administration through different media
platforms that include a microblogging and social networking site,
Twitter, the manner in which some individuals or groups have gone
about creating and operating unauthorized personal accounts for the
governor, is totally unacceptable.

“In the last six months, at least five accounts have been opened in
the governor’s name. The media office has made frantic efforts like
sending them direct messages (DMs) to these accounts, particularly one
of such accounts that have generated more than 2,000 followers.

“However, the operators of these unauthorized accounts have refused to
identify themselves or come forward for discussions. At the moment,
the governor has one authorized official account which is @GovBorno.
There is also a recently created personal handle that is already
growing followers.

“However, in order not to embarrass operators of any of the multiple
unauthorized accounts, there will be a three-day delay in announcing
the name of the recently created authorized personal account.

“The delay is to give three days’ room to operators of existing
multiple accounts to either close these accounts or in the case of the
one with substantial followers, come forward for negotiations. The
negotiations will, of course, include a critical review of the kinds
of content shared by the account since it was created, the persons
being followed by the account and those following it to possibly reach
a win-win resolution.”

The statement noted further, “Operators of any of the multiple
accounts can, within three days, use the same unauthorized accounts to
send Direct Messages (DM) to any of the following twitter accounts:
@GovBorno, @SpokesmanBornoG or @Bundi58. Although Emails may as a last
option, be sent to [email protected] sending DM’s from the
unauthorized accounts would be the best way to indicate that the
sender exercises password control over the account.

”The DM’s should contain the identity of those sending the messages
with the request for meeting at a venue and time that is convenient
for both parties.” 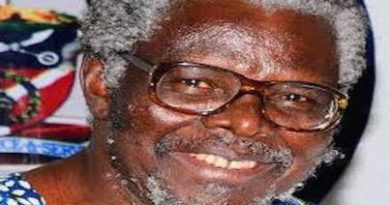 Buhari Tells Jos People: I Feel Your Pains At This Difficult Moment

Ancient Sparta was well known for its military might. While the Athenians were often sarcastically referred to as Philosophers by other fellow Greek-City-States, Sparta had always had the distinctive feature of being associated with war. The Peloponnesian war which the Greek City-States fought against one another before they overtime became united under Agamemnon was enough proof to earn Spartan their warfare status.

Spartans achieved this feat of victory in warfare because no form of weakness was allowed and their kings must be trained to become the best. When a male child is born in ancient Spartan, he is taken to the oracle and if detected a weakling is thrown into the cold mountains to die, but if found strong is given back to the mother till the age of seven when he is recruited into the military school.

Not even the Spartan Kings were exempted from the practice. If anything they had to be the strongest. Their trainings have to be the toughest and therefore Sparta produced the fiercest of Kings. Little wonder then that king Leonidas and his 300 personal bodyguards could withstand Xerxes at the hot gates; an action which cut short Xerxes imperial campaign.

Spartans had to literally put their best foot forward as the kings were known to lead their armies into battle. This is the state of leadership in every part of the word and the world today. Countries and States ensure that those at the helms of affairs are ably qualified for such positions even when these leaders are ably termed Aristocrats, for Aristocracy in itself is defined as government by the best. Modern administrations may not required the military prowess of ancient Sparta but the principle remains, the best must be fielded at the helm and weakness cannot be allowed in leadership. Countries, states and every human organization must put their best in position of power.

Nigeria as an independent State seems not to understand the cardinality of this single act and that is why the nation is engulfed in a circlical movement of progression and regression. The micro state divisions within the Macro Nigerian State is not left out of the saga of poor leadership. We have devised new means to celebrate mediocres in power and it is to this end this piece has been directed.

I do not understand why the political class both within the federal level or State level has bluntly refused to give the likes of Chief Dr Solomon Iyobosa Edebiri MON the chance to pilot the affairs of State and the state of affairs. President Olusegun Obasanjo saw the talents and professionalism of this unique Edo son during his administration and appointed him a member of the Presidential Visitation Panel instituted to look into the PTI, a service he rendered successfully and for which the then president had to invest him with the National Award of MON (Member of the Order of the Niger). Successive administrations both at the federal or State level has been blinded by self conceit, envy, political contests, pettiness or outright lack of foresight in seeing for themselves the extent of contribution this man could make to any nation or State.

I have seen the roles this unique Edo born, Chief Dr Solomon Edebiri MON, had to play at the international scene. While other nations seek the professional advice of this giant figure in unraveling complex technical and professional issues, we have chosen to work with mediocres. It should be noted that Chief Dr Solomon Edebiri MON is the first Nigerian to carry out an online inspection on Nigerian refineries and petrochemical plant without shutting them down even when many experts thought it was not possible. How can we have such people and not give them a chance!

If the political class is too blinded by greed or pettiness, it is therefore my opinion that Chief Dr Solomon Edebiri carve a niche for himself. For the sake of the people he wishes to serve, he should never give up his political ambition. We and others like us, are fully in his support and he will continue to enjoy that support from us and the larger society. The certitude and acceptance by which he is greeted by the people are unquantifiable.

"There is a tide in the affairs of men which taken in the flood leads on to fortune" (William Shakespeare). In my not so humble opinion, Chief Dr Solomon Edebiri is that tide in the affairs of our nation and State, that if launched in the current flood bedeviling Edo State politics, will lead us collectively as a people to our fortune.

Why do politicians like to waste their money. Tell Edebiri they is no democracy in Nigeria. The peoples vote dont matter. Supreme court allocates vote, inec too.

Well he has to keep trying! Nobody will change the nation for us. we have to change it for ourselves!

The time u would have joined APC is gone. No vacancy sir.

IF E LIKE MAKE E PEPPER YOU, NA GOVERNOR WHEN DEY WORK DEY TURN YORUBA FOR THE EYES OF PEOPLE WEY NO WANT PROGRESS.

NA OBASEKI BE THIS! AND NA THE GOVERNOR WHEN EVERYBODY, BOTH MEN, WOMEN, YOUTHS AND EVEN THE CHILDREN LOVE, EXEPT THOSE ONES WHEN NO WANT PROGRESS AND THE TRUTH BE SAY, WE NO CARE, FOR BABA GOD IN HEAVEN DEY BY OUR SIDE GIDIGBA! ... See MoreSee Less

you were called to lead praises in the church and you saw an unknown person unplugging your phone, what will you do ... See MoreSee Less

I missing this food.ema my best food

I love my people so much.Esan forever

If you over fed with pounded yam today, you will still eat it tomorrow 😀😀😀 hope I got it

From Court To Police Custody: Plight Of Young Investigative Reporter By Alfred Olufemi