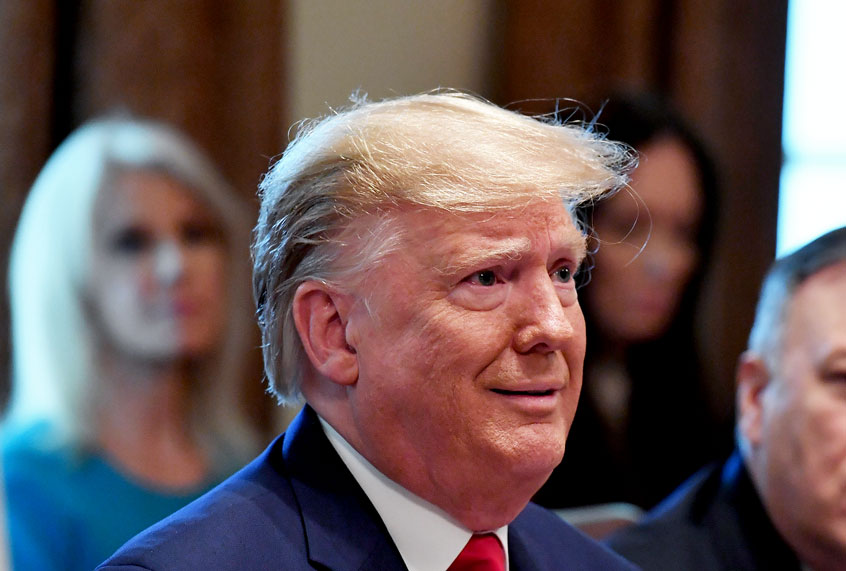 After Donald Trump’s humiliating appearance at the World Series in Washington, where he was met with a cacophony of boos and “lock him up” chants, Trump made a cheap effort at righting the ship by going to an Ultimate Fighting Championship event in New York on Saturday. It no doubt seemed like an easy win to Trump and his adult sons — who accompanied him — since the popularity of UFC is assumed to be based on the same insecure masculinity and love of pointless cruelty that motivates Trump’s base.

No doubt, there were plenty of crappy white guys ready to cheer the orange hobgoblin whose racism and sexism helps distract them from their haunting and absolutely correct fears of their own inadequacies. But even at the UFC match, in the belly of the toxic-masculinity beast, Trump found that people hate him and was met with even more boos.

But this time, instead of just admitting that he can’t stick his head out public without being booed, Trump turned to his trusted friend, gaslighting, to deny the loud, undeniable booing recorded at Madison Square Garden. Trump took to Twitter and claimed it was “like walking into a Trump Rally.” Both Donald Trump Jr. and Eric Trump, who were there and certainly heard the loud booing, insisted the claims about heckling were “fake,” even though, again, the video evidence proliferated online for anyone willing to watch it. Soon, a tedious debate on social media broke out, with Trump supporters trying to muddy the waters and deny what was clearly audible on the videos from Saturday.

It was a rehash of the Trump inauguration, when the White House, through then-press secretary Sean Spicer, vehemently insisted that Trump had drawn “the largest audience ever to witness an inauguration,” a claim that anyone with functioning eyeballs could see was a flat-out lie. And yet Trump’s base played along, choosing to agree with the blatant lie instead of the evidence of their own senses.

These sorts of events, where Trump tells narcissistic lies about his own popularity and his followers pretend to believe him, might seem like silly diversions. But it turns out they serve a purpose. Trump is now pulling the same stunt with his impeachment defense, calling on his supporters to refuse to accept the evidence that’s front of their own eyes, and believe his transparent lies instead.

To recap: The only reason Trump is almost certainly getting impeached in the first place is that, in a recreated (and, apparently, selectively edited) White House transcript of a July 25 phone call with Ukrainian President Volodymyr Zelensky, Trump clearly threatens to withhold military aid in order to extort the Ukrainian government into helping him fabricate conspiracy theories. One of those, of course, was aimed at smearing former Vice President Joe Biden and the other, weirdly, was aimed at exonerating the Russian government from the charge it interfered with the 2016 presidential election. This transcript more than confirmed what an anonymous CIA whistleblower had pointed out. Indeed, it was so bad — with Trump literally saying, “I would like you to do us a favor, though” when Zelensky asked for the aid already appropriated by Congress — that most observers of all political stripes were shocked that Trump saw fit to release it.

Yet now Trump’s new favorite line to proclaim his innocence is: “Read the transcript.”

This is but one of many variations of Trump angrily insisting on Twitter that anyone who reads the transcript would immediately see that it proves his innocence. He even told the Washington Examiner, a right-wing site, on Thursday, “At some point, I’m going to sit down, perhaps as a fireside chat on live television, and I will read the transcript of the call because people have to hear it.”

Of course, he’s lying (as usual). Trump may be the dumbest man to ever sit at the Resolute Desk, but even he is smart enough to know that pretty much every person who reads the transcript walks away saying, “Wow, he is even more of a blatant criminal than I ever could have imagined.”

Trump also knows full well that he’s guilty, which is why he blocked four more White House officials from testifying on Monday. These are not the actions of a man who thinks that the evidence will clear his name. These are the actions of a criminal who is trying to keep evidence out of the hands of law enforcement, just as Trump did when he repeatedly obstructed the investigation of his ties to Russian intelligence.

No, Trump keeps repeating “read the transcript” because, as with his other catchphrases, such as “no collusion” and “no quid pro quo” — or as with his lies about being booed or crowd size — the point is not to assert a fact, but more to instruct his defenders and his base voters on what they are supposed to claim to believe.

Trump knows that most of his followers won’t read the transcript. But now they know they are expected to claim that they’ve read it, and to insist that it says something entirely other than it does. Even if, in a moment of weakness, they do read the transcript, they understand that their instructions are to fake the belief that it exonerates him. It’s like the inauguration crowd-size “debate” all over again, where Trump supporters will look right at a picture showing how much smaller his crowd was than Barack Obama’s, and claim not to see the evidence right in front of their eyes.

(Just in case his followers do slip up and read it, Trump has even pushed the idea that the transcript has been faked by House Democrats. Of course, it has not. It was released by the White House itself.)

It seems crazy, but using the Orwellian “2+2=5” technique has been incredibly effective for Trump up until now. The “no collusion” parroting morphed into common wisdom after special counsel Robert Mueller released his report, even though the report had ample evidence of collusion and even though Trump literally colluded on live TV by instructing Russian agents to go after Hillary Clinton’s emails. But because Mueller’s investigation failed to gather enough evidence to charge a criminal conspiracy — a much different thing than the non-legal term “collusion” — the “no collusion” branding stuck, even though that claim was a blatant lie.

The difference this time, we must hope, is the impeachment inquiry. Trump’s entire strategy, like his previous attempts to cover up for criminal and corrupt behavior, is focused strictly on trying to win this one in the media. It has worked in the past because Trump is so adept at manipulating the media, particularly by exploiting the desire for “balance,” which allows his lies to be given the same weight as the truth, and to confuse audiences so much they give up trying to figure out what the hell is going on.

The impeachment inquiry, however, is about laying out evidence carefully and logically, and isn’t beholden to the pressures to balance the truth with right-wing lies. The New York Times might feel it has to take Trump’s clearly false claims of innocence seriously, but the House Intelligence Committee, which is running the inquiry, does not. On the contrary, its members will do what Trump claims he wants his supporters to do: Reading the transcript. Repeatedly. Probably out loud. And the more they do that, the harder it will be for Trump to claim innocence.

“Being busy all the time is not healthy”: Ban.do founder wants to change the narrative about success

Mike Bloomberg doesn’t understand he is part of the problem