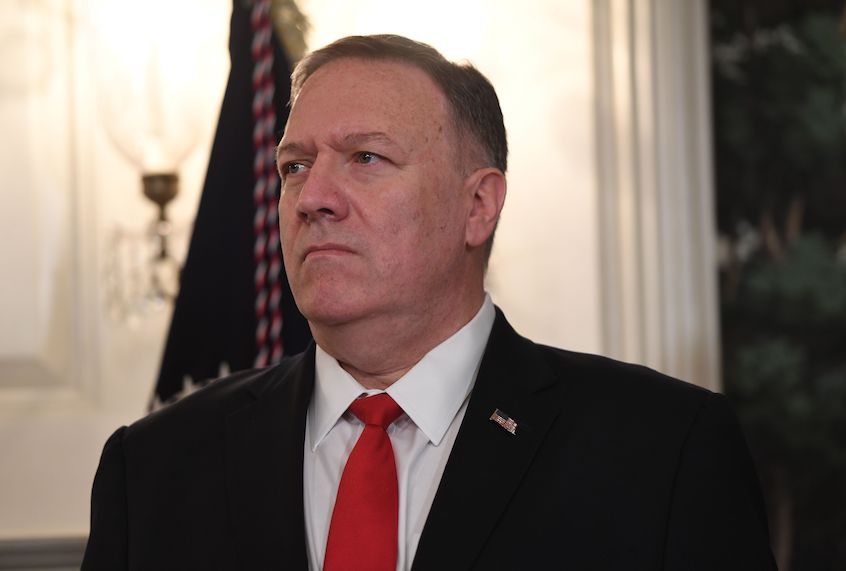 On paper, and often in action, Mike Pompeo is a knowledgeable, well-spoken guy who plans his moves and follows through, all the while dealing successfully with the politics surrounding his job as secretary of state and even seemingly managing many of Donald Trump’s foreign policy impulses.

So, it is disappointing at best, and troubling at worst, that Pompeo increasingly finds himself in the nexus of the Ukraine mess, the shadowy private dealings of presidential fixer Rudy Giuliani and impeachment politics. Pompeo’s basic response: Silence, even as the questions rise over the gunwales of the State ship.

Indeed, though we all understand Pompeo generally is going to protect Trump as president, we have an expectation he will speak truthfully about issues affecting the nation.

I’d hardly expect Pompeo would turn and attack Trump as lacking judgment, ethics, basic strategic understanding or even some measure of empathy for the disasters in his wake. But I would expect Pompeo, first in his West Point class, would-be upholder of American values on the international stage, to be truthful and forthright.

Isn’t the choice between whether Pompeo was involved in the widening plot to enable Giuliani-Trump dealings with Ukraine or whether he was clueless about what was going on in his own State Department?

The detailed testimony this week by Ambassador William Taylor pretty well undercuts all the excuse-making by Pompeo and Trump, making clear that the only way Pompeo would not know about a determined campaign to get Ukraine to commit to the Trump demands for investigation of political foes would have been for him to stick his head in the sand.

By all reports, morale in the State Department has hit all-time lows not only because Trump makes foreign policy moves based solely on whim, but because Pompeo is not standing strong for State employees. Indeed, the string of impeachment witnesses going to Congress to denounce the Trump-Giuliani moves in Ukraine have been dominated by diplomats who have turned on Pompeo orders for them not to testify.

Pompeo has simply refused to answer questions about Giuliani, and has said the Democrats were conducting a “deeply troubling” process. Aboard his plane returning from Turkey, Pompeo fiercely criticized the House impeachment inquiry, saying his department is being treated unfairly as Democrats seek to remove Trump.

Increasingly, the State Department is at the center of the Democrats’ impeachment questions as well as those about North Korea, Iran, the Middle East and the recent decisions that unleashed the Turkish military against our American-allied Kurds.

Where was Pompeo as Giuliani, acting as Trump’s private lawyer, circumvented standard diplomatic channels to try to dig up dirt on Trump’s political opponents? Where was Pompeo as Giuliani and friends worked to undermine Marie Yovanovitch, the U.S. ambassador to Ukraine, because she was not playing ball? If Pompeo was on the July 25 call between Trump and Ukrainian President Volodymyr Zelenskyy, why could he not answer questions about its contents – after the White House had released its summary? Why as secretary of state, has Pompeo allowed partisan politics to be the fulcrum for Ukraine to receive weapons aid?

In other words, is Pompeo acting as a political adviser and worker for Trump or holding to his oath as secretary of state?

If Pompeo was on the Ukrainian call, he must also have been part of the call with Turkey’s leader Recep Tayyip Erdogan. What was his advice to Trump, and how did he allow Trump to get snookered by Erdogan?

Instead, Pompeo has taken up the Republicans’ procedural objections to the impeachment inquiry – and any questions of Trump’s behaviors.

Pompeo says the process is unfair because State Department lawyers are not in the room where questioning goes on, state secrets are being put at risk and the department is being afforded little visibility into what current and former employees say.

Of course, there is hypocrisy here. Pompeo as a congressman during the Obama presidency served on the select committee that investigated the 2011 consulate attack in Benghazi, Libya.

Pompeo was a vocal critic of then-Secretary of State Hillary Clinton. He wrote a dissent from the official findings of the Republican majority, complaining that the Obama administration “stonewalled” by refusing to turn over key documents or allowing crucial witnesses to testify. In an interview with Politico, Pompeo said the House probe into the Benghazi attack did allow State Department attorneys to listen to depositions and review transcripts of interviews after they were transcribed.

Pompeo has been silent about claims by Ambassador Gordon Sondland, for example, who said he cooperated with Giuliani with the blessing of Pompeo, who had even sent him “a congratulatory note that I was doing great work, and he encouraged me to keep banging away.”

Asked specifically about this by ABC’s George Stephanopoulos, “George, I’ve had one consistent policy as the secretary of state to not talk about internal deliberations inside the administration,” Pompeo replied. “I’m not going to change that policy this morning.”

Stephanopoulos pointed out that Giuliani is ‘not a member of the administration” and was pursuing the Ukraine cooperation with an investigation of Joe Biden and his son Hunter at the president’s direction. “George, private citizens often are part of executing American foreign policy,” Pompeo fired back. “You know that. You lived that. You want to talk about Sydney Blumenthal for a while, George? I can go all day,” said Pompeo.

You know, Mr. Secretary, so can I.

Does Donald Trump really believe all those conspiracy theories? Depends what you mean by “believe”