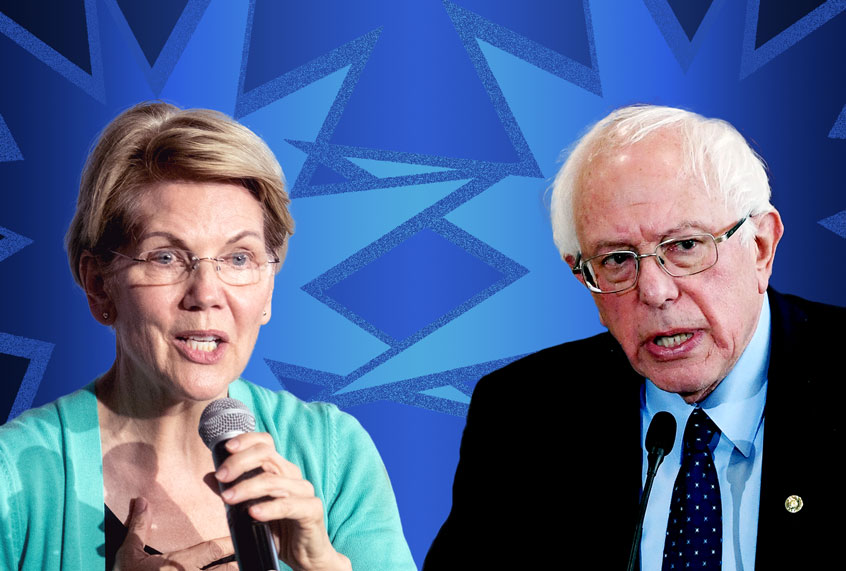 After four Democratic primary debates in which the first hour was dominated by pundits — as well as centrist candidates — raising the alarm about how to pay for the widely popular Medicare for All proposal, Sen. Elizabeth Warren has finally agreed to release a funding proposal. In a sense this is odd, since, as Sen. Bernie Sanders repeatedly reminds voters, he is the one who “wrote the damn bill.”

Warren feels obligated to do this because she, rather than Sanders, is increasingly the main or even sole target of opponents like South Bend, Indiana, Mayor Pete Buttigieg, who is sending out missives declaring: “Elizabeth Warren Just Dodged Questions on Middle Class Taxes Again.”

But there’s a problem with Buttigieg’s approach, as well as with all the pundit concern over potential about tax increases to pay for Medicare for All: This framing is painfully, incredibly, mind-bogglingly stupid. As Warren and Sanders keep pointing out — and as journalists and centrist politicians keep pretending not to hear — those tax raises will at least be offset by the end of private insurance, most likely leading to an overall decrease in health care costs.

This is so obvious, in fact, that we can safely assume that when Buttigieg or debate moderators or journalists keep asking concern-troll questions about Medicare for All and higher taxes, they are deliberately playing dumb, for the sole purpose of baiting the two progressive candidates near the top of the polls. The entire exercise is despicable. It confuses the issue, to the great shame of journalists who are supposed to be clarifying issues for voters. It feeds Republican talking points, to the great shame of Democrats who should not be eager to give Donald Trump ammunition he can use against the eventual nominee in 2020.

“New study: Full-scale ‘Medicare for All’ costs $32 trillion over 10 years,” screams a typically alarmist headline at The Hill.

Buried, however, multiple paragraphs into the article — well past where most people read — the piece admits that Americans “would no longer have to pay premiums or deductibles for their care, resulting in $886 billion in savings for people over 10 years,” and that the plan would make sure the 32 million currently uninsured Americans would be covered.

This is in line with other studies, even the one conducted by the conservative Mercatus Center at George Mason University, which have found that the $32 trillion government price tag would represent a significant savings for the country on health care spending.

There’s a recurring problem in the way this issue is framed by mainstream media and “moderate” Democratic framing of this issue: The nonsensical assumption that people hate paying taxes so much they’d rather let insurance companies gouge them than pay slightly higher taxes while overall health care spending goes down. This is like claiming that an $100-a-month public transit pass is somehow more expensive than paying hundreds of dollars a month on car payments, insurance and gas. It’s flat-out asinine.

Yet, time and again, pundits and journalists and politicians act like they’re too dense to understand that two dollars is more than one dollar, even if that one dollar is taxes.

Note that, for some unexplained reason, there is little or no debate about the funding of other health care proposals. Other candidates’ “Medicare for some” policies aren’t free, but the fact that no one asks how they’ll be paid for shows the extreme bad faith that is shaping this entire discussion.

Obviously, the real point of constantly asking Warren about funding Medicare for All is to get her on the record saying that she plans to raise taxes. That’s a genuinely puzzling goal, because the only possible purpose of such a video clip is to give Trump fodder for a 2020 campaign ad. Why Buttigieg and the Democratic debate moderators seem to think they are obliged to be Trump’s unpaid opposition researchers is truly a mystery.

There are many criticisms that can be leveraged against Medicare for All that don’t involve playing so dumb that you don’t understand basic math. There are genuine concerns that Republicans will undermine and gut any Medicare for All plan when they gain power. There’s legitimate reason to fear that women’s health care will be severely restricted, due to still-powerful forces of sexism in this country. There are valid questions to raise about price controls and expanding access in rural and other underserved areas. There are questions about whether the economic shocks of transforming our health care system so rapidly will have unintended consequences.

But nah. All we get instead is a big, stupid debate that presumes spending more money is better than spending less money, so long as that larger sum goes to the predatory insurance industry consumers supposedly love so much.

It also assumes, for some bizarre reason, that Americans enjoy having to live with the nonstop stress of having overly complicated health insurance programs that are full of loopholes and excuses to deny coverage to any person with an actual human body who is foolish enough to seek medical care. Warren, in particular, has tried to talk about the immeasurable but significant quality-of-life issues that a single-payer system might address. But that has mostly been ignored in a debate shaped solely by the bizarre Reagan-era assumption that money spent on taxes is bad and money spent on private insurance is good.

There should be much more attention to these questions, so it was great to see comedian Rob Delaney open up to the New Yorker about how living in the U.K. — where health care is not just a single-payer system, but one directly run by the government — helped spare his family extra misery and grief when his toddler son died of cancer.

“What we didn’t have to do was spend hours, days, weeks, months on the phone with billing offices or insurance companies making sure this MRI would be covered,” Delaney told New Yorker writer Emily Nussbaum, noting that the time saved “was time that we got to spend with our son.”

“So, yeah, I want to abolish private health insurance in the United States,” he added.

Nearly everyone in the country can relate on some level, since the entire point of the private insurance industry is to make profits by finding excuses to deny care — even if that means torturing families who are going through difficult times by making them spend hours on the phone or fill out endless paperwork to get coverage they have already paid for. The inhumane nature of the current system is largely being neglected in this rush to frame this entirely as a fiscal issue. This isn’t about budgets and taxes. It’s about forcing people to spend huge amounts of money on private services that, by design, frequently fail to provide the services we pay for.

Despite Warren’s best efforts, she is probably not going to make this debate go away by announcing that she has a plan for that. The problem is not that journalists or centrist Democrats don’t understand how we’re going to pay for Medicare for All. They understand just fine: We’ll pay for it by redirecting the money that currently going to private insurance into a more cost-effective government system. Some people, most notably the insurance industry and their lobbyists, don’t like that idea. So these bad-faith questions that focus on taxes to the exclusion of other costs will continue to be asked, no matter how often Warren or Sanders answer it.

The good news, however, is that the American public is increasingly not fooled. A PRRI survey released on Monday shows that 63% of Americans support a Medicare for All plan that “would replace private health insurance with government-backed health insurance coverage for all Americans.” Even 31% of Republicans favor such a plan.

No matter how much pundits and centrists and Republican politicians bang on about taxes, most Americans aren’t that dumb, and understand that the bottom-line issue is the important part. They want to save money on health care costs and have guaranteed access, period. Private health insurance companies are simply not allowing that to happen. We need to have a real debate about health care, one that focuses on what people care about — cost, access and services — and get past the bad-faith bogeyman of higher taxes.

How Maura Tierney learned to identify with a “monstrous” torturer