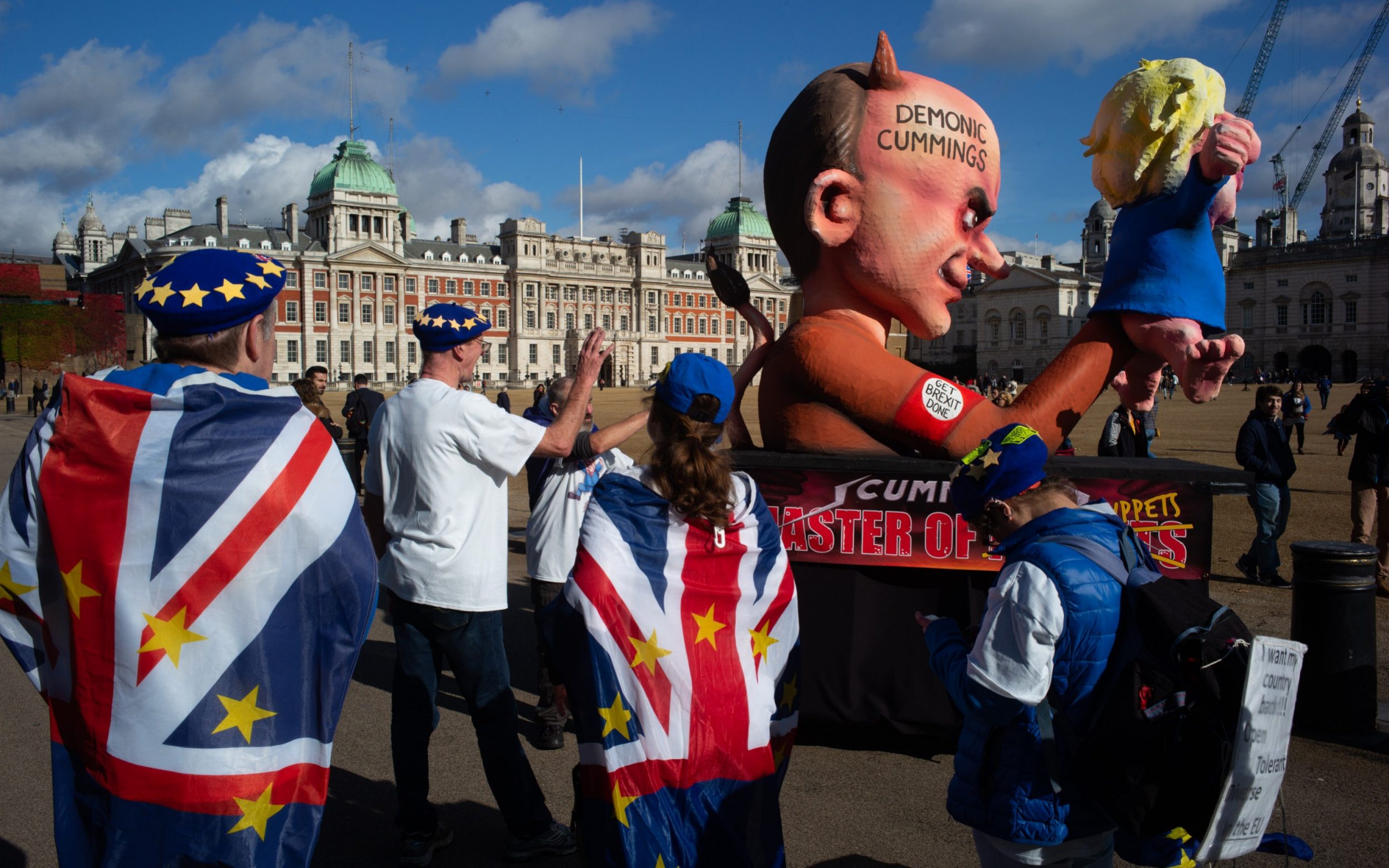 When the vote came the reaction was one of uncontained joy.

It wasn’t the end of Brexit, but for those who had come out in their hundreds of thousands to protest against Boris Johnson’s deal Sir Oliver Letwin’s amendment was a new obstacle in its path.

There were huge cheers from the crowd in Parliament Square as the result of the vote on the amendment was announced.

Feelings ran so high that although the march was overwhelmingly peaceful, Jacob Rees Mogg, the Leader of the House, and his son Peter were heckled as they walked home under a police escort.

Michael Gove and Andrea Leadsom also received police escorts away from Parliament at the end of the first Saturday session since the Falklands War.

Police said no arrests had been made by the time the march officially came to an end.

Ms Leadsom wrote on Twitter: “Thank goodness for our superb police. Just walked home safely from HoC with their protection – why do the so called ‘People’s Vote’ protesters think it’s ok to abuse, intimidate and scream in the face of someone they don’t agree with? So frightening, and so grateful to the police.”

Labour’s Diane Abbott was also given police protection after being harassed by a small handful of pro-Brexit supporters.

Pictures of the tellers reading the result inside the chamber where relayed to a giant screen outside, prompting delighted whooping among those who had gathered outside.

After jumping up and down in delight Janet Morrison, a lawyer in her 50s from Bedfordshire, said: “This is so significant. I’m so pleased. It means MPs can properly scrutinise the deal now rather than accepting Boris’s reassurances at face value.

“It also delays Brexit and brings us closer to a second referendum. It’s brilliant.”

Her friend Shona Kelly, 41, from Galway, Ireland: “Boris is running out of room and out of lies. This makes it possible to still stop Brexit.”

Piers Clark, a 58-year-old jazz guitar teacher from Brighton came up to London to protest, said: “I am  very pleased that the Letwin amendment has gone through as it means that Johnson has to send a letter to the EU which will prevent a no deal which was always on the cards.

“I want a second referendum because after having voted for remain, I am so much better informed now about the damage any kind of Brexit will do. Even the people who voted leave must also be better informed of the damage it will cause to their livelihoods.”

Labour MPs Sir Keir Starmer, Emily Thornberry and Diane Abbott came out of the Palace of Westminster to be greeted as heroes.

Addressing the crowds Sir Keir said: “What we have done is historic because we defeated Johnson again. We are not going to let him to rip us out with this sellout deal and we have just won by 16 votes.”

Organisers claimed that as many as one million people marched through central London on Saturday to demand a second referendum on Boris Johnson’s deal to leave the European Union. Police would not confirm the figure.

Such was the weight of numbers that by the time the front of the People’s Vote march had reached Parliament Square, thousands more had yet to set off from Park Lane, two miles away.

Scotland Yard said no arrests had been made in connection with the march as of 5pm on Saturday.

The demonstrators had gathered from every part of the country, Leave voting or Remain, setting off before dawn for the long journey to the capital.

More than 140 coaches from places as far afield as Darlington, Durham and Derby, Manchester and Macclesfield, Sheffield and Barnsley, Totnes, Huddersfield and Kiddeminster disgorged marchers close to Hyde Park’s Speakers Corner, their passengers ready to exercise its age old tradition of free speech and democratic demands.

Thousands more came by train, arriving at Kings Cross, Paddington, Waterloo and Victoria with rolled up banners and homemade placards, their points of departure as diverse as Haywards Heath, Lewes, Swindon, Croydon, Bromley and Leighton Buzzard. There were also contingents from Edinburgh.

Simon Fuller, a 67-year-old retired Met office weather forecaster from Exmouth, Devon, said: “I’ve been a pro remain supporter right the way through the process. I think we would be worse off if we left because the country would be poorer. The emerging superpowers in the modern world mean that we need to be in Europe to hold our own on the global stage.

“I’m also concerned about lowering environmental and social standards that would result from Brexit. I’m a Christian which means I believe in justice for everyone- the poor people on low paid jobs will suffer the most from a bad deal.”

Ubiquitous among the crowds was the flag of the EU, draped on shoulders and waved alongside the flags of the UK regions.

Among the hand drawn placards was one that encapsulated the mood of the march, almost unable to comprehend what might be about to happen. It read simply: “Brexit is Madness.”

A Dachshund, or sausage dog, wore a coat reading: “Brexit is the Wurst”. There was also a gathering of at least 11 whippets dressed in EU flags.

At one stage a knot of Brexit supporters draped in union flags marched through the Remain crowds in Parliament Square, chanting anti-EU slogans while being closely monitored by police. It looked as if tensions might rise, but the small group was largely ignored and drifted away.

Another group calling themselves Yellow Vests UK stood outside the Palace of Westminster singing songs and trying to drown out the Remain speakers, to little effect.

Making his way to Parliament with his mother in law was father of two Mani Kumar, 57, from Kingston upon Thames, a consultant for a financial firm.

He said: “I think we shouldn’t  be leaving because I think England is living in a fantasy land – the empire is gone. It’s better to stick with the bigger block which is the EU.”