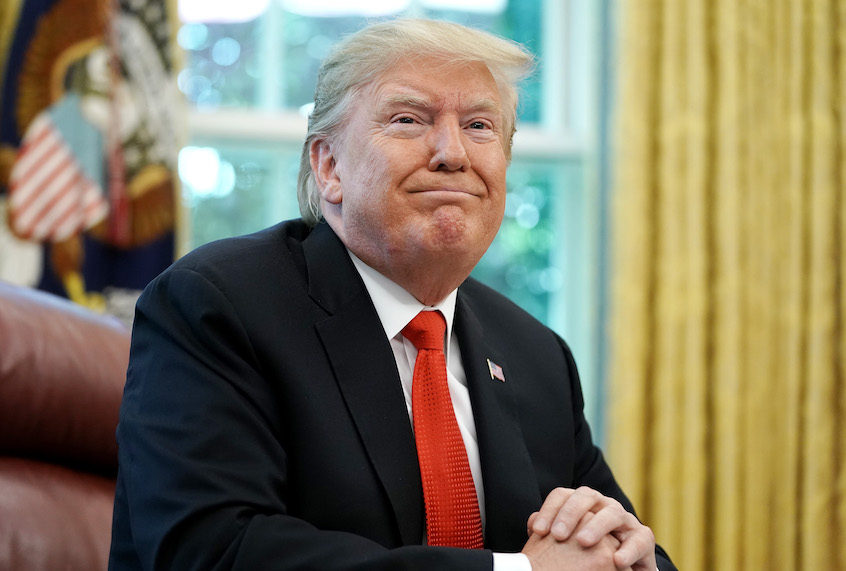 The long-impending constitutional crisis has arrived, courtesy of a CIA whistleblower. If his or her complaint was conceived as a covert political action operation, it could not have been more effective. The nine-page letter did what Robert Mueller’s 448-page opus did not: jump-start the impeachment process. The day after Trump acknowledged he spoke with the Ukrainian president about Joe Biden’s son Hunter, seven freshman Democrats, six of them with national security experience, came out for impeachment. Nancy Pelosi, an impeachment skeptic, relented and allowed impeachment proceedings to begin. “The facts changed the situation,” she said.

No, says the president and his defenders. It’s just “BULLSHIT,” tweeted the rattled Trump. His conversation with the Ukrainian president was “perfect,” he intones. To doubt its perfection is to join the ongoing “deep state” conspiracy to get him.

Trump’s defenders, while awash in bad faith and lies, are correct about one thing: there is a subterranean conflict that pulses beneath partisan clashes between congressional Democrats and the Republican president. It is a clash of bureaucratic factions, fought with leaked (or planted) narratives disseminated by allies in the media.

This is the traditional way of Washington politics, now whipped to a froth by the convulsions of a dysfunctional and deregulated political system. Not only do U.S. intelligence agencies see the American presidency is vulnerable to manipulation (or capture) by pro-Trump intelligence services in Moscow, Riyadh, and Jerusalem, but the president himself is viewed as a threat to the national security process.

The crisis runs even deeper than Watergate, which had the effect of empowering Congress and reining in the intelligence agencies. As in Watergate, the Trump crisis pits a president who says there are no limits on his freedom of action against the institutional forces of the CIA and FBI. These agencies were, and are, adept at defending their interests in the Washington press corps. As in Watergate, the interests of the agencies and the Democrats overlap — they both seek to curb and remove a lawless president.

The CIA-White House power struggle is much more naked than during Watergate. In the early 1970s, the agency abhorred the very idea of a “media presence.” The imperious director Richard Helms occasionally testified in Congress, but he gave no interviews. He cultivated senior editors but betrayed few secrets. The CIA, respectable and feared, had many Republican defenders on Capitol Hill. No more.

Today, the Agency is more public and politicized. The agency’s suspicions of Trump crystallized as he marched to the Republican presidential nomination in 2016. Trump’s arriviste style and proud ignorance were provocative to the agency’s buttoned-down style. So was his “isolationism” and hostility to the shibboleths of free trade and national security. Damaging leaks of classified information from national security sources began even before he took the oath of office.

Since then, the political profile of the CIA has grown. Former directors John Brennan and Michael Hayden have become cable TV regulars, along with a diverse cast of former officers. In 2018, two CIA formers were elected to Congress, and the agency launched its Twitter and Instagram feeds (which, Edward Snowden observes, amount to state-sanctioned propaganda repackaged as adorable social media.)

Publicity is not necessarily an advantage for covert operators. Unlike Nixon, Trump is willing to mobilize popular hostility to his bureaucratic antagonists. Privately, Nixon raged and plotted against the CIA and FBI, but publicly he championed those agencies. He couldn’t and wouldn’t make them a political issue.

Trump is not so constrained. Four times in the last two weeks, the president has taken to Twitter to liken the whistleblower to a spy who should face “Big Consequences.” With less than a third of Trump supporters holding a favorable opinion of the CIA and FBI, Trump can shore up his support by demonizing his critics as tools of “a Crooked and Demented Deep State.”

Nonetheless, Trump has taken a punch, apparently from the CIA, that has him raging incoherently in public. The whistleblower’s complaint about Trump’s dealings with Ukrainian President Volodymyr Zelensky transformed Washington’s political reality by capturing Trump, the recidivist, in action.

Last spring, Mueller’s cautious report detailed how Trump’s entourage solicited help from the Russian state agents without ever quite conspiring with them. Mueller documented how Trump obstructed his investigation but left it to others to bring charges. “No collusion,” Trump crowed.

But, barely a day after Mueller’s July 24 appearance before Congress, Trump couldn’t help but do what he had just denied: He sought to collude. The White House summary of his conversation with Zelensky essentially confirmed the whistleblower’s narrative that Trump had tried to solicit — if not extort — a foreign government into helping his 2020 election campaign. Thanks to the CIA officer’s report, the case for impeachment suddenly had a simple narrative and a new urgency.

The role of the CIA is unnerving. President Harry Truman initially opposed the creation of the CIA in 1945 because he feared creating an “American Gestapo,” a secret police force. The agency’s involvement in American politics today is hardly unprecedented. In the early 1990s, four senior agency officers were indicted for leading roles in the Iran-contra conspiracy to bypass a congressional ban on CIA activities in Central America. But, in that case, the agency and the presidency were aligned. President George H.W. Bush, a former director, pardoned the indicted men on the advice of Attorney General Bill Barr. The agency suffered little for its intervention in domestic politics.

Now the CIA and the White House are at war. In comparison with an unstable president, a rogue attorney general, and a coterie of conspiracy theorists, the agency’s credibility is higher than usual. But the Ukrainian revelations, coming from an employee of a law-breaking, not law-making, organization, has to be treated with care.

First of all, meddling in (and profiting from) Ukrainian politics is the norm in the U.S. political class, as Yasha Levine notes. Paul Manafort, Trump’s one-time campaign manager, reaped coin in Kiev. So did Tad Devine, a strategist for Bernie Sanders’ 2016 presidential campaign. So did Hunter Biden. That doesn’t excuse Trump’s mafioso-like demand for “a favor” from the Ukraine president, but it does explain why he might have thought it was business as usual.

The complaint, Kiriakou speculated in a phone interview, was written by “a committee of spies.” He speculated that the whistleblower was advised by CIA superiors, including lawyers, before submitting the complaint to the inspector general in the Office of the Director of National Intelligence. The New York Times has reported that the whistleblower only shared the complaint anonymously with CIA lawyers. That said, Kiriakou added, “I want to believe the guy. I think his identity should be protected and more people should come forward.”

I asked Larry Pfeiffer, former chief of staff to ex-CIA director Michael Hayden, if he thought the whistleblower’s complaint had been vetted by the agency.

“I’m not going to speculate about something like that,” he replied. “The whistleblower statute was written to protect the identity of the whistleblower, so I would assume he or she wouldn’t want others to know. My reading of the complaint is that it sounds like the whistleblower coordinated with others working on Ukraine issues across the inter-agency [process.] I think they were all concerned that the stated policy of the U.S. government was not being adhered to.”

Now the agency embraces oversight to ward off a hostile president.

It’s easy to mock Morell’s commitment to democracy given the agency’s record of anti-democratic dirty tricks. The fact that Morell is a Post columnist (and CBS News contributor) illuminates the alignment of the liberal media and the clandestine service. But Morell’s take on the current crisis is hard to fault.

Thanks to a “radical change in our politics . . . many partisan actors today seek advantage by rejecting bedrock institutions and norms while a significant portion of the electorate responds with nihilistic glee,” wrote Morell and Kris. “As applied to the oversight of intelligence, this convergence is very dangerous, because those institutions and norms are a major part of what keeps the intelligence community properly in check.”

In other words, the beleaguered CIA is looking for allies on Capitol Hill, especially among liberals and Democrats who want stronger oversight.

“From what we know so far, this looks very much like the story of Mark Felt and Watergate,” says historian Bruce Schulman of Boston University. Felt was the senior FBI official who served as confidential source for the Washington Post’s Watergate reporters as they investigated President Nixon’s abuses of power in the early 1970s.

“There’s a career employee, a lifer, who doesn’t like the way the White House wants to use his or her agency,” Schulman went on. “He or she wants to push back. What’s different is that in the post-Watergate environment, they don’t have to leak to the Post. There are new institutions and processes through which that can happen.”

A president who is out of control confronts an agency that wants to show Congress and the public that it is under control. All of which underscores the new reality of Washington’s impeachment season: nobody’s in control.

CuriosityStream is the Netflix for documentaries — save now

Former Trump spokeswoman was punished after top aide got her pregnant, lawsuit claims