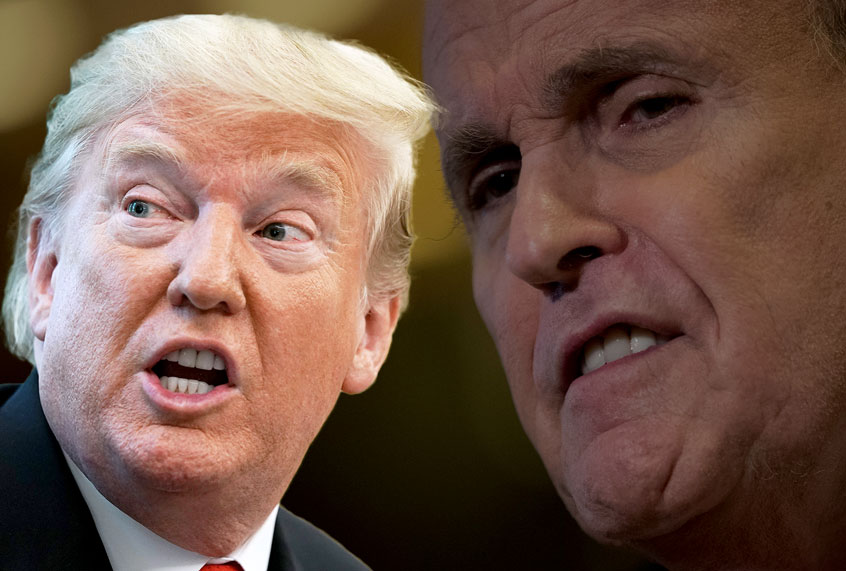 The president of the United States isn’t taking this whole impeachment thing very well is he? From his red-faced tarmac tirades last week to his hysterical tweeting over the weekend, it’s clear that he is losing whatever tenuous hold he had on his emotions. Here’s just a sample of the most powerful man in the world’s state of mind right now:

Yes, he’s demanding that House Intelligence Committee chairman Adam Schiff, D-Calif., be investigated by “the highest authority” (whoever that might be) for treason and fraud. And he’s retweeting supporters who are threatening civil war if the House impeaches him. To say he is upset is an understatement.

The other big Republican with his name in the crosshairs is Trump’s personal lawyer, Rudy Giuliani — who, it must be remembered, was leading the GOP presidential primary field eight years ago at this point, proving that the Republican Party has been heading over the cliff for a long while. Giuliani seemed barely coherent on television this weekend; one imagines that if he had become president we would probably have landed in pretty much the same place we are now.

Giuliani showed up on ABC’s “This Week” with his hands full of papers he claimed would prove that Donald Trump had been framed by the Democrats. He lied in claiming he had never pushed the conspiracy theory that Ukraine had hacked the Democratic National Committee to frame to Russians, but did insist that the Ukrainians had created “false information” and colluded with Hillary Clinton to interfere in the 2016 election. His client has certainly signed on to the Ukrainian hacking theory. That’s what Trump was referring to in his conversation with Volodymyr Zelensky when he mentioned CrowdStrike, a computer security firm in California whose founder, Dmitri Alperovitch, is — well, no, not Ukrainian. (He’s Russian by birth.)

Giuliani waved his papers around for the cameras and claimed that if Trump hadn’t demanded that the Ukrainian president investigate Joe Biden he would have violated Article II, Section 3 of the Constitution, whatever that means. (That largely concerns the president’s authority to convene or adjourn Congress, and his duty to deliver the State of the Union.) Giuliani also said he would not appear before the House Intelligence Committee, or that perhaps he would if they put in a chairman he approved of (i.e., not Adam Schiff).

He had a lot to say and little of it made any sense.

Giuliani is falling apart. He’s in the middle of a contentious divorce. His former colleagues in the Justice Department have said that the prosecutor he once was would have arrested the lawyer he is now. His legacy as “America’s Mayor” after 9/11 has been shattered. It’s only a matter of time before Donald Trump has to pull the plug on this relationship in order to save himself. Whether Giuliani sticks with the boss or follows in the footsteps of his previous fixer, Michael Cohen, his future doesn’t look bright.

The question then will be whether Trump calls in the B-team, longtime Republican lawyers Joe diGenova and his wife Victoria Toensing. They are all up to speed on this Ukraine situation, since they’ve been working with Giuliani since at least last spring. The New York Times reported in May that while Trump had decided not to bring the conservative power couple into the White House to work on the Russia probe, they would “assist him with other legal matters.” This explains that.

Toensing and diGenova had been pushing the Ukraine conspiracy theory on Fox and on Twitter for months:

Toensing was even scheduled to accompany Giuliani on his controversial and ultimately canceled trip to Ukraine, and has personally met with the Ukrainian prosecutor at the center of the conspiracy theory.

Recall that Toensing was also involved in the bogus Uranium One scandal as well as “Spygate.” She defended former Trump underlings Mark Corallo and Sam Clovis, both witnesses in the Mueller investigation. In other words, this dynamic duo has been operating “off the books” in Trump World, as Chris Wallace put it on Fox News this weekend, for some time. As Josh Marshall has reported, Toensing and diGenova have recently signed another client by the name of Dmitry Firtash, a Ukrainian oligarch who happens to be the former business partner of Paul Manafort, Trump’s now-incarcerated former campaign chairman. It’s a small world after all.

But Trump might have another reason for turning to diGenova and Toensing. They know their way around impeachment. During the Monica Lewinsky scandal in the late ’90s, the Washington Post called them “The Power Couple at Scandal’s Vortex.” The reporter on that piece was Howard Kurtz, now of Fox News, who wrote:

DiGenova has become a white-hot media presence, politically connected lawyer and all-around agent provocateur. He and Toensing, also a battle-tested former prosecutor, keep popping up wherever there is trouble — as commentators, as investigators, as unnamed sources for reporters. A classic Washington power couple, diGenova, 53, and Toensing, 56, occupy a strange, symbiotic nexus between the media and the law that boosts their stock in both worlds. They are clearly players, which gives them access to juicy information, which gets them on television, which generates legal business.

These people were made for the Trump era.  In fact, in some ways they invented it. Here’s Toensing, after the revelation that she was approached by a go-between for Linda Tripp, the woman who was working with GOP operative Lucianne Goldberg to trap Lewinsky into talking about her affair with Bill Clinton on tape:

On NBC’s “Today” the next morning, Toensing assailed what she called “the anatomy of a lie. … That’s how it works here, folks. It ain’t pretty. … They put out just enough of a kernel of truth and then spin it, because what they want to do is make it look like all Republicans got together to go after the president.”

Sound familiar? I wrote about the two of them back in February of 2018, when it was announced they would represent Corallo. DiGenova had been giving interviews pushing a theory that Barack Obama and James Comey had engaged in “a brazen plot to exonerate Hillary Clinton and frame an incoming president with a false Russian conspiracy.” In fact, diGenova had been working that beat even before the 2016 election, complaining on Fox News about Comey’s handing of the Clinton email case:

Recall that Rudy Giuliani had been saying much the same thing at the time, and was rumored to be working with the New York FBI office to ensure that Comey would blow up the Clinton campaign in the last days.

There’s no word that diGenova and Toensing were working with Giuliani back then. They really didn’t have to. They’re professional Republican operatives who do character assassination for a living. They don’t have to be told.

So of course they are involved in this Ukraine business. They have been at the center of every bogus right-wing conspiracy hustle of the last 20 years. Where else would they be?

This psychopath has finally crossed the red line: He must be stopped now

Somebody in Trump’s cabinet came out in favor of carbon pricing?

Don't kill yourself because of a stressful relationship, better kill the relationship and save your life. ... See MoreSee Less

Check the dignitaries at Rawlings’ funeral