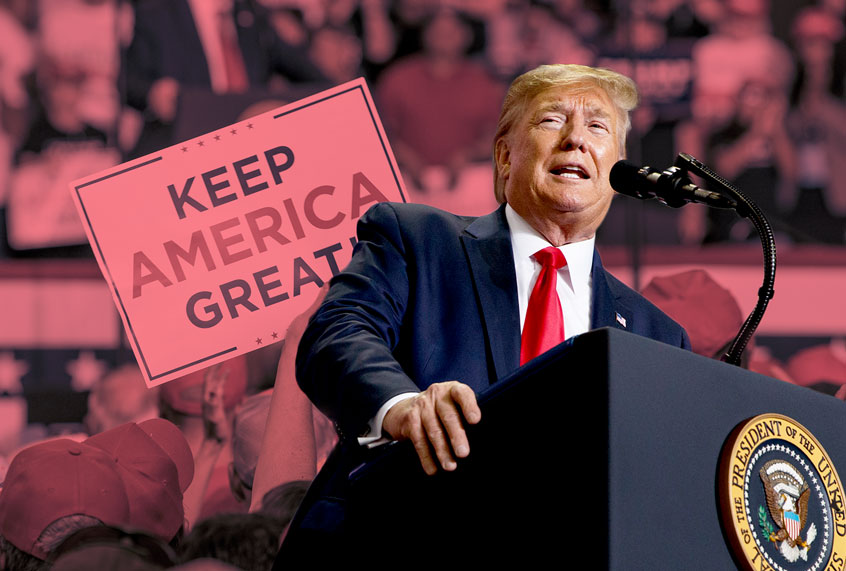 At one point during the event, Trump questioned how CNN contributor Steve Cortes could be Hispanic.

”He happens to be Hispanic, but I never quite figured it out, because he looks more like a WASP than I do,” the president reportedly said.

Trump then asked Cortes, “Who do you like more: the country or the Hispanics?”

After Cortes responded “country,” Trump said: “I don’t know. I may have to go for the Hispanics, to be honest with you. We got a lot of Hispanics.”

The president later claimed that Hispanics should support him and his proposed southern border wall because of their supposed ability to empathize with the drug crisis.

The president later claimed that “nobody loves the Hispanics more” than himself. “We love our Hispanics,” he said. “Get out, and vote.”

This is far from the first time that Trump, who launched into the political spotlight by pushing the racist birther conspiracy about former President Barack Obama, has vilified the Latino community. As he announced his presidential campaign in 2015, Trump told the audience that undocumented Mexican immigrants were “bringing crime” into the U.S and were “rapists.” In June 2016, he attacked federal Judge Gonzalo Curiel, who was then presiding over two class-action lawsuits against Trump University, by claiming that Curiel had “an absolute conflict” of interest, since he was building a wall and the judge was “of Mexican heritage.”

The president has also been accused of racism in his policies. Speaking with Salon in February, Sen. Jeff Merkley, D-Ore., said Trump was a racist, because “he has painted a picture in public of a horde of rapists and murderers surging across our border that have to be stopped. But his attorney general’s office and Homeland Security have been absorbed with the issue of a transition, from Mexican men who are coming to the border looking for work to families who are fleeing the drug gangs of Central America. So he has inaccurately described the immigration challenge and he developed a strategy to deter families that was based on injuring children.”

He added, “So it is political for this president. Because when the president says, ‘Mexicans are murderers and rapists and drug dealers,’ please understand that his message is that Latinos are this.”

“#MeToo was our rehearsal space”: An interview with Shelly Oria

What white nationalists and incels have in common: Blaming feminism

Budding Nollywood actor Mandinga Perikles is gradually drawing attention with his attractive look and unique acting prowess. He was shot