Instagram says a video of a shop display posted by a London-based fishmonger was accidentally flagged as containing offensive material.

Rex Goldsmith said it was the second time in two weeks that one of his posts had been greyed-out, with a warning message placed over the top.

He said he wondered whether it had been reported as offensive by someone vegan.

“This content was marked as sensitive in error and has now been reinstated. We apologise for the mistake.” said a spokesman from Instagram’s parent company Facebook.

“I totally understand censorship – but when you think that Instagram is owned by Facebook, and if you look at some of the videos on Facebook, they are disgusting – some are violent, some have foul language – I find it a bit bizarre that they can then think a bit of cod fillet is offensive,” Mr Goldsmith told the BBC.

“It’s kind of backfired – if you’re scrolling through your Instagram feed and you come across a censored image, you’d want to have a look.”

The Vegan Society told the Daily Telegraph that while vegans do find images of dead animals offensive, they were also unlikely to follow the Instagram account of a fishmonger.

Mr Goldsmith, who has 2,600 followers on Instagram, said he was not aware of it having happened to other fishmongers, but he had heard that some butchers had experienced similar censorship.

“Instagram is a shop window for us business people who put stuff on it,” he said.

“I can put a video or photo up of a particular fish, and I’ll often get direct messages or phone calls saying ‘save one for me’ – it’s a good connector.

“I have nothing against people who choose not to eat meat or fish, but it’s my little business and I am precious about it.” 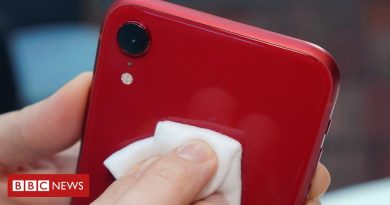 Coronavirus: How to safely clean your smartphone