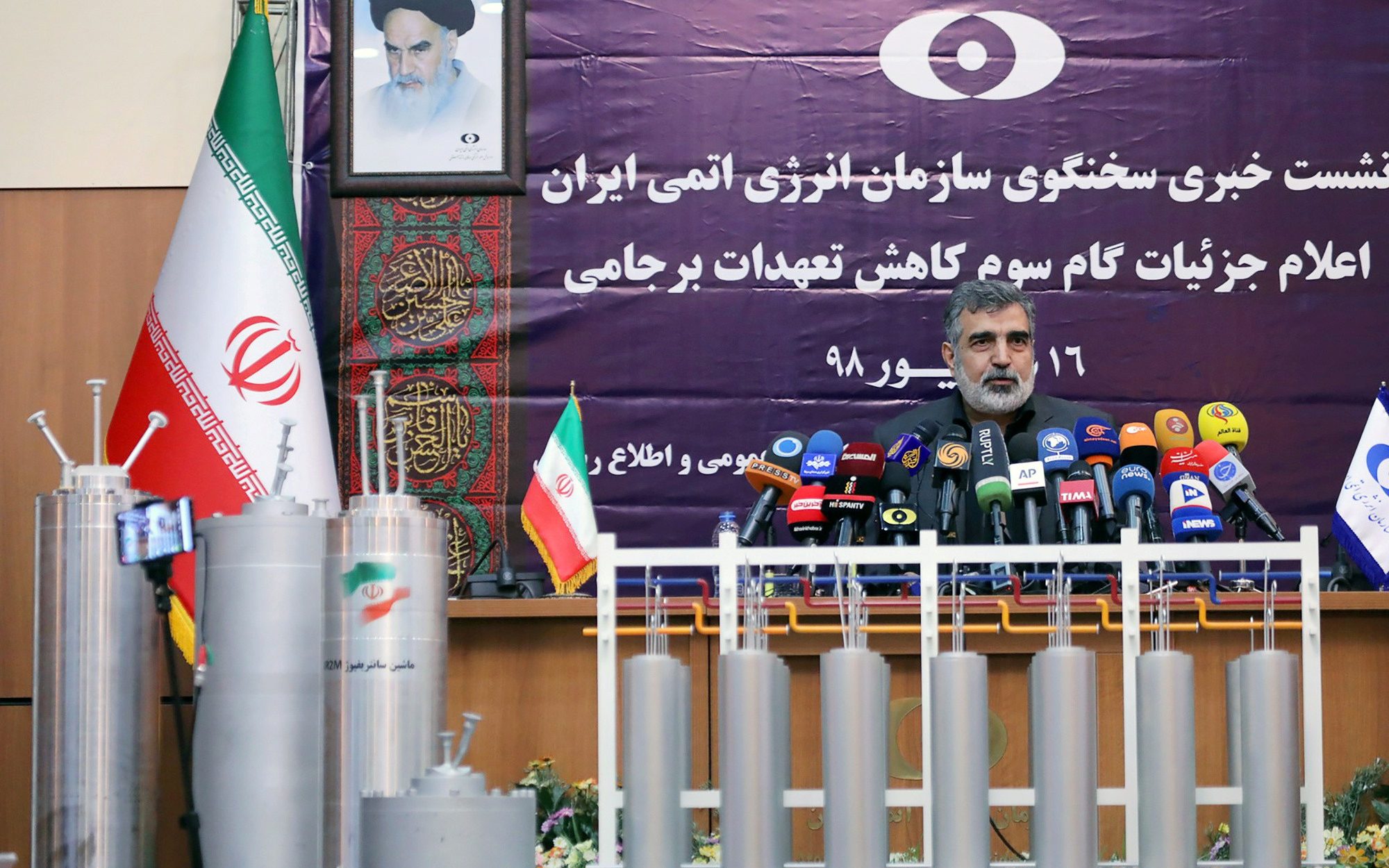 Iran has sped up its uranium enrichment programme in the latest breach of the nuclear deal as it ratchets pressure on the West.

A spokesman for the country’s nuclear agency said it had launched forty centrifuges boosting its ability to make reactor fuel and ultimately nuclear weapons.

Behruz Kamalvandi said the measures are reversible at this stage if the European signatories to the 2015 nuclear deal restore Iran’s access to foreign trade.

“The European parties to the deal should know that there is not much time left, and if there is some action to be taken [to salvage the nuclear deal], it should be done quickly,” Mr Kamalvandi said on Saturday.

Britain, France and Germany have repeatedly said they are committed to saving the deal that gave Iran relief from sanctions in exchange for curbs on its nuclear programme, but their efforts have so far borne little fruit.

Emmanuel Macron, the French president, has led the European initiative. In his latest effort, he offered Iran a $15 billion line of credit to compensate for lost oil sales.

Mr Kamalvandi said the centrifuges now in operation are capable of enriching uranium to concentrations of 20 per cent. 90 per cent is required to make weapons grade uranium.

Iran began breaching the terms of the 2015 nuclear agreement after the US abandoned the deal last May and reimposed economic sanctions on the country. The deal was intended to prohibit Iran from developing nuclear weapons.

In July the International Atomic Energy Agency (IAEA) found Iran had stockpiles of enriched uranium in excess of the 300kg it was allowed to have under the accord. Less than a week after the IAEA inspection, it began to enrich uranium to a 4.5 per cent concentration, exceeding the 3.67 per cent limit set out in the deal.

Dr Roham Alvandi an Associate Professor at the London School of Economics and expert in Iran affairs said Iran does not wish to disband the 2015 deal and are trying to “keep it as in tact as possible”.

“This most recent step does not bring them much closer to developing nuclear weapons, that is not their intention. They are still subject to inspections by the IAEA who are monitoring their stockpiles.

“There are so many variables that it is difficult to determine how long it would take Iran to develop a nuclear weapon. The Joint Comprehensive Plan of Action was designed so Iran would remain at least a year away from reaching the necessary stockpiles for a bomb.”

Meanwhile, the Iranian tanker seized by Gibraltar in July was photographed by a US satellite off the Syrian port of Tartus.

The vessel formerly known as Grace 1 was released on August 15 after Tehran made assurances that its 2.1m barrels of oil would not be released to Syria. The tanker was seized in July by the British Royal Marine who suspected it was travelling to Syria in breach of EU sanctions.

Armed with a whale’s tusk and a fire extinguisher: the heroes who took on the terrorist

In your dreams not real life

For you to become a governor in apc, I will vote pdp.

He is no longer a thief? Oshiomhole is the architect of the crisis in Edo apc

Let him go and face his church

Do you want me to release the video of the champagne against you by Oshomole some years back? Mr Ize Iyamu don't make people to believe you that you are a pastor

Won't these public thieves ever for once be ashame, enough is a enough, in the name of Jesus we are standing to resist you, Amen

Running, running and run away!!!

Major General Buhari and his dumb handlers, open their lying mouths and expose how delusional they are.

Mr Adesina argued that compared to the Goodluck Jonathan government, "where bombs were going off 10 times a day", the situation has improved.
View on Facebook
·Share

Why is this fool from a proustite mother not in the war front to stop the killing? You are insulting the President of your country like this, because you are using a fake name on Facebook. Should Buhari go to the war front himself? You and your father if you have any, should go to be war front, instead of the President. Animal.

But what I don't understand is the fact that people are still blindly supporting these murderers call APC.

KADUNA-ABUJA ROAD WAS VERY SAFE IN 2015

This man most be mad

My earnest prayer is that the next person that will be kidnappers will have in their den will be related Femi Adesina and they will not negotiate with him but rather wast the life, so that this man will know what is happening in this country

This man is the most foolish man on Earth

I feel ur talk