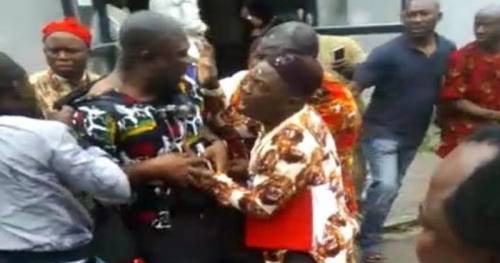 Last Saturday afternoon, the Internet broke with a viral video of the Indigenous People of Biafra coyotes attacking former Deputy Senate President, Ike Ekweremadu, and sending him out of an event in Nuremberg, Germany. In the said video, Ekweremadu was thoroughly humiliated, beaten and sent out of the event by a rabble that were hooting and fretting at him. A crest-fallen Ekweremadu must have been wondering what possessed the very people he had bent over severally to please. It was Ekweremadu himself, who confirmed the attack later in the day. He said he was at the event but was not allowed to settle as an irate mob of IPOB members heckled, threw pellets at him and physically attacked him until he was ferried out of the event. He lamented that he had been one Igbo that had supported the war cry of IPOB and the multifarious issues it had raised against the Nigerian state and wondered how he could be so humiliated.

Personally, I was also confused why IPOB should attack Ekweremadu of all people because he stands at the very epoch of the crop of Igbo politicians that have indulged IPOB, its excesses and its rabid hate politics. Ekweremadu has been at the very zenith of mostly Peoples Democratic Party politicians in Igboland, who have pampered IPOB and supported all its nuances and idiosyncrasies in the feeling that they are getting back at President Muhammadu Buhari and his Fulani kinsmen for rusticating their beloved Goodluck Jonathan from power in 2015. That feeling of hurt has been at the root of the morbid hatred that had been cultivated against President Buhari, the Fulani and the All Progressives Congress in the South-East since 2015 and Ekweremadu remains at the very centre of this politics. But then, with time, IPOB has come to attract the odium and scorn its vile-ridden politics provoked especially among other Nigerians, who remain solidly railed against this politics. Igbo politics has, in the sequel, plummeted and gone into near-extinction in this mad predilection to sow anger, bitterness and hatred and Igbo have been so badly ostracised and negatively profiled in Nigerian politics in such a way that navigating out of this self-imposed miasma and even staking a credible claim to the Nigerian presidency in 2023, which many feel should rightly come to the Igbo, has become a near-difficult task.

But in the face of this bleary picture, Ekweremadu and his ilk have flowered. They have been winning elections upon elections in Igboland and at the end of the day, they have sucked the juiciest portion of the hate-driven politics they have promoted in Igboland leaving Igbo with the bones. Yes, because their messages are filled with transitory emotions, they easily mobilise the unthinking rabble to their sides and were wont to levy death, banishment, ostracisation on any voice of caution that as much as ask for little caution in the war cry that marked the public face of groups like IPOB. Ekweremadu has been contesting elections in his Enugu senatorial zone for years and has been winning. Not because he is the best. Not because he had no quality opponents. Not because he has the interests of the masses at heart. Most importantly, not on the weight of any achievement he has wrought as either a senator or a Deputy Senate President but because he harvests the fruits of the hate and bitterness he and his cohorts have made the mainstay of Igbo politics and which has knocked Igbo off as a major factor in Nigerian politics today. Ekweremadu and his fellow PDP share reapers cannot point to one durable, single project Igbo benefitted from the 16 years of PDP rule of the country yet they win every election in Igboland just by pandering to the ascorbic gospel such groups like IPOB preach. They win election by a deliberate effort to sound politically correct in the face of an orchestrated effort to lease the Igbo political space to an unthinking mob and irascible plebeian that preach death and such other vicarious damage to those that preach tolerance of others. They win every election in Igboland by the volume of hate and abuse they heap on other constituent parts of Nigeria and on President Buhari and his APC.

So, while Ekweremadu and his ilk feed fat on the choice fruits of the hate-filled politics they cultivate in Igboland, Igbo as a race withers away into hopelessness and pine in utter powerlessness the Ekweremadus prodded the race into. IPOB, which they used as a convenient vehicle for their devious trade, has gotten itself proscribed, its ranks and file dispersed while the Ekweremadus retain their choice political seats and prospecting for higher grounds for purely selfish aggrandisement. Perhaps, Ekweremadu thought naively that those that will fall prey to the poisonous teeth they sharpened for IPOB would be those that support Buhari and the APC and all those they have tagged saboteurs for advising against the insipid hate-driven politics they have promoted and not people like him. He must have thought he was safe enough from the consequences of politics of self-destruct, which he and his confederates nourished in Igboland and that IPOB would be the guided rabid dog they want it to be; to get at all those that preach against their bigotry inclination.

Certainly, Ekweremadu set for Germany on another hunt for cheap, ethnic applause and plaudits. He was on a regular mission of employing every opportunity of professing his love for Igbo and how those that had advised Igbo to thread with caution, to liberalise their political worldview, embrace others and seek for cohabitation against insularity are the Igbo enemies that must be exterminated. Without doubt, Ekweremadu, who claimed he was invited as a guest speaker in the event he was disgraced, must have prepared a speech laden with odium, contempt, scorn, incitement against President Buhari, his Igbo supporters, the Fulani, the Yoruba and in fact other ethnic nationalities and prurient in praise for Igbo for being the best specie of human beings God ever created. That is the message that resonates with Ekweremadu’s IPOB and he relishes playing this to the hilt.  It is tragedy to him that his audience were not patient enough to hear him. He would be biting his fingers that his latest tonic to those he considers cheap, spendable and pliable rabble, was not allowed to be ingested by his target audience and his political leverage in Igboland extended with that effort.

Since the attack on Ekweremadu, there have been a cacophony of angry voices of condemnation largely from Ekweremadu’s confederates and associates in romancing evil for political interests. It is notable that nearly all Igbo groups and individuals that have condemned the IPOB attack on Ekweremadu were with Ekweremadu in cultivating the nuisance of IPOB and their like groups. They were together in helping IPOB build a riotous cult of brain-washed nit-wits, who violently go against reason and common sense in plying their violent trades and have been trenchant in campaigning against any effort to curb the excesses of IPOB.

But having said all these, there is great wisdom in the saying that whoever rides a tiger will ultimately end up in its bowels. It is certain that Ekweremadu and his cohorts who have been cultivating bitterness and hate and pandering lavishly to the nuances of such groups like IPOB believed in their unbeatable smartness. What more, this has been an elixir to their harvesting every political opportunity in Igboland since they started their devious mission. But it is a rude awakening to sly, manipulative characters like Ekweremadu, who deign no scruples having their beloved Igbo race plummet to the very lowest depth of Nigerian politics so long as they continue to maintain their suzerain hold on the political space in Igboland. I believe that when Igbo engage in serious thinking about their fate, they would realise the kind of harm and damage people like Ekweremadu, who profess undying love for Igbo at every drop of the hat, have done to the race. It is trite to say that the attack on Ekweremadu remains one of the fallout of any effort to elevate and romance evil and encourage it, hoping it will go after only your enemies. Groups like IPOB have gone beyond control and their targets will remain the Ekweremadus, who employ them as convenient ladders to their own political aggrandisement. Sad for them, their foes whom they target those groups against, know the diabolical intents of such groups and have guarded themselves against their nuisances.

I don’t really know what  triggered the attack on Ekweremadu and I am not interested in knowing but those, who mischievously invest in the kind of politics that have flowered in Igboland since 2015, those who con rich harvest from it while it leads to a great deforestation of Igbo, those who feed fat on that salad of bitterness and hate, those who have made Igbo to incur the hatred and repulsion of other people in Nigeria for their selfish ends, those who believe they will continue to milk Igboland by supporting cheap, emotional vibes that pit and endanger Igbo among other people in Nigeria, will certainly reap what Ekweremadu reaped in Nuremberg, Germany; either now or in the near future. 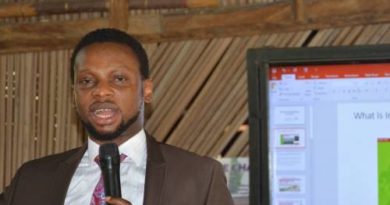 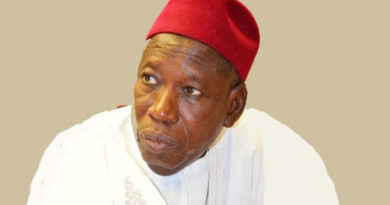 Ganduje: Understanding The Pathology Of Revenge By Azu Ishiekwene