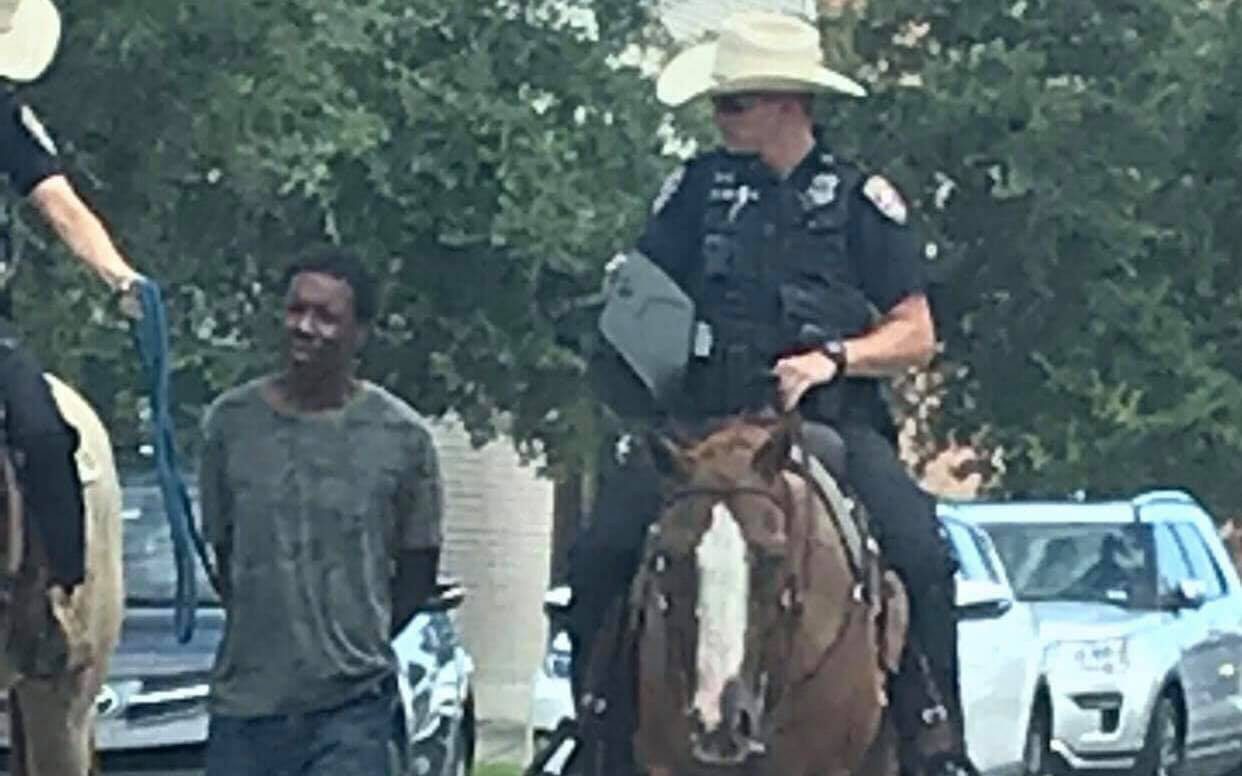 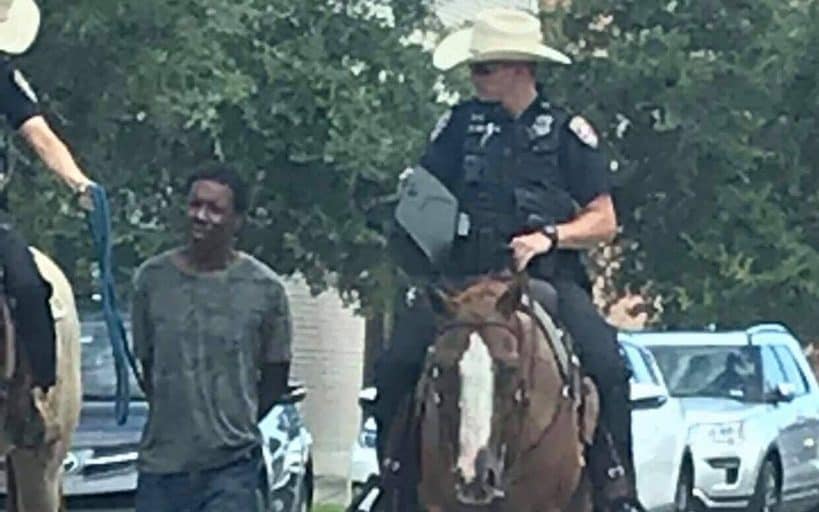 Police in Texas have apologised after photographs emerged of two white officers on horseback leading a black man down the street by a rope.

Donald Neely, 43, had been arrested on suspicion of trespassing in an office building in downtown Galveston, a coastal city of 50,000 people just outside Houston.

The officers attached a rope to the handcuffs behind his back, before leading him to a police staging area eight street blocks away.

A passerby took photographs which circulated on social media, leading to a widespread backlash against the police department. “This is 2019 and not 1819,” said James Douglas, president of the Houston chapter of the National Association for the Advancement of Colored People.

It was the latest incident to raise tensions over police treatment of black suspects. Prominent alleged abuse and deaths in custody have sparked riots in recent years up and down the US.

Melissa Morris, a lawyer for Mr Neely’s family, said he was homeless, mentally ill, and suffered from bipolar disorder.

Galveston’s police department said leading a suspect by a rope on horseback was something officers were trained to do.

It was an accepted law enforcement technique, and even “best practice” in some situations.

However, following fierce criticism, it was announced that the practice would be discontinued.

In a statement the police department said: “We understand the negative perception of this action and believe it is most appropriate to cease the use of this technique.

“While this technique of using mounted horses to transport a person during an arrest is considered a best practice in certain scenarios, such as during crowd control, the practice was not used correctly in this instance.”

Vernon Hale, the Galveston Police Chief, said: “First and foremost I must apologise to Mr Neely for this unnecessary embarrassment.

“Although this is a trained technique, and best practice in some scenarios, I believe our officers showed poor judgment in this instance, and could have waited for a transport unit at the location of the arrest.

“We will review all mounted training and procedures for more appropriate methods.”

He added that the officers had no “malicious intent” when they led Mr Neely by a rope, and their body cameras were activated at the time. Mr Neely was previously known to the officers.

The officers were named by the police department as Officer P. Brosch and Officer A. Smith, but it was not clear if they would face disciplinary action.

Mr Neely was accused of trespassing in a building containing offices for companies including investment management firm Merrill Lynch. He was later released on bail.

Leon Phillips, president of the Galveston Coalition for Justice, said: “These are two white police officers on horseback, with a black man, walking him down the street with a rope tied to the handcuffs, and that’s doesn’t make sense, period.

“Stay there with him instead of humiliating him, and now you’ve humiliated the whole city of Galveston. And I do understand this, if it was a white man, I guarantee it would not have happened.”

The incident will likely put authorities on high alert for a backlash.

In 2014 Michael Brown, an unarmed black 18-year-old, was fatally shot by a white officer, Darren Wilson, in Ferguson, Missouri.

The officer was not charged and Mr Brown’s death led to months of protests, becoming a catalyst for the Black Lives Matter movement.

The following year there were protests in Baltimore when Freddie Gray, a 25-year-old black man, died after being injured in a police van.

In New York relations between police and the black community have been poisoned by the death of Eric Garner, a 43-year-old black man, in police custody in 2014.

Daniel Pantaleo, the officer who applied a chokehold to Mr Garner, is still on the force amid ongoing calls for him to be fired.

Paris is too ugly for now for an Amélie sequel, says French film’s director

Rosetta Quarshie, a social entrepreneur and an ex-convict won the first edition of the just ended King Cold Entrepreneurial Challenge.