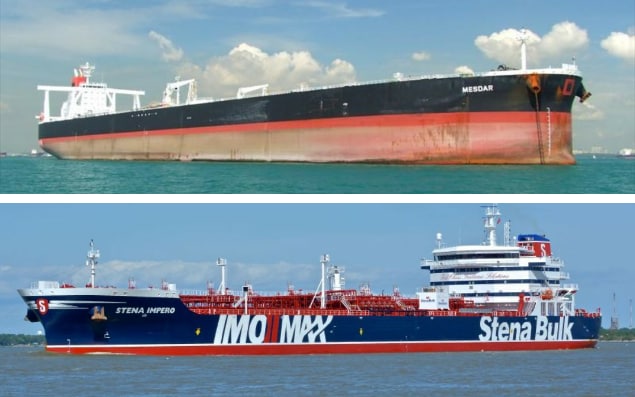 A British-flagged oil tanker was seized by Iran on Friday night and was heading towards a Revolutionary Guard base, in a major escalation of tensions along one of the world’s most vital oil shipping routes.

The Stena Impero had been en route to Saudi Arabia but made an abrupt change of course and began moving towards the Iranian island of Qeshm, according to data relayed by maritime tracking services.

The ship “went dark”, meaning its identification system was turned off, at 16:29 UK time and nothing has been heard from her or her 23 crew since.

Northern Marine, a Clyde-based subsidiary of the ship’s Swedish owner Stena AB, confirmed that a “hostile action” had preceded the vessel’s change of course on Friday afternoon.

They issued a statement saying it had been “approached by unidentified small crafts and a helicopter during transit of the Strait of Hormuz while the vessel was in international waters.”

Iran’s Revolutionary Guards said in a statement that they stopped the tanker at the request of the maritime authority in the Iranian province of Hormozgan on suspicion it has “violated international maritime law”, but did not elaborate.

There were also concerns about a second oil tanker, the British-operated, Liberian-flagged Mesdar, which turned sharply north towards Iran’s coast, about 40 minutes after the Stena Impero’s course shift.

Tracking data showed the Stena Impero was in the same area where a United Arab Emirates-based vessel was detained on Sunday and where a British vessel, the British Heritage, was blocked by Iranian forces earlier this month.

A Cobra meeting was held between officials from the Foreign Office, Ministry of Defence and other Government departments on Friday night to determine the UK’s response.

A Whitehall source told the Telegraph of the Stena Impero: “It does look like it has been hijacked. Ships don’t follow that pattern. It turned right and straight into Iranian waters. It is really concerning that this has happened.

“It looks on the face of it as though the Iranian Revolutionary Guard have boarded and taken a UK-flagged ship. It appears to be linked to events around the Grace 1 tanker.”

British authorities seized the Iranian Grace 1 supertanker off the coast of Gibraltar on July 4, on suspicion it was carrying crude to Syria in violation of European Union sanctions.

The fate of the tanker has been at the centre of escalating tensions between the UK and Iran and seen as a pawn in the standoff between the Islamic Republic and the West.

Jeremy Hunt, Foreign Secretary, had hinted last Saturday that the UK would release the ship if Iran promised its cargo would not go to the Syrian regime. He said talks between him and counterpart Mohammad Javad Zarif had been productive.

However, a court in Gibraltar on Friday extended for 30 days the detention of the vessel, which was carrying two million barrels of oil.

Revolutionary Guards have been threatening retaliation for its impounding and the move would likely have aggravated an already-tense situation.

Tensions have been building for weeks in the Persian Gulf.

On 10 July, a British warship, the HMS Montrose, intervened to drive three Iranian military vessels that were attempting to divert the British Heritage.

Iran seized a Panama-flagged ship on Sunday, it alleges, for “smuggling oil to foreign countries”. However, mystery has surrounded the capture as no country has come forward to claim the ship or its cargo.

The vessel, however, was only carrying a very small amount and it had been thought Iran had seized it as merely a show of strength.

The US then on Thursday claimed to have downed an Iranian drone that had been flying too close to one of its navy ships.

The USS Boxer, an amphibious assault craft, destroyed the drone after it came within 1,000 yards in the Strait of Hormuz, at the entrance to the Gulf

However, Iran denied the claims and released footage on state TV to proof it was still in possession of the drone.

The latest incidents will only increase fears for security along the Strait of Hormuz, through which almost one-fifth of the world’s oil passes.

Oil prices rose on Friday night in reaction to the news.

After one of the worst performing weeks since May, oil started the day firmer but slipped as the US and Iran continued to trade brickbats. The later rise initially still left it well down on the previous week. Oil was down more than 8pc this week overall when markets in London closed.

Iran has threatened to close the Strait if it cannot export its oil. The Trump administration is trying to block Iran’s exports as a way to pressure it to renegotiate the landmark 2015 nuclear deal it abandoned last year.

The UK, which is understood to have seized the Grace 1 after a request from the US, is trying – alongside the EU – to keep the accord alive, believing it is the best chance to stop Tehran acquiring a nuclear weapon.

“I’m extremely concerned by the seizure of two naval vessels by Iranian authorities in the Strait of Hormuz.

“I will shortly attend a COBR meeting to review what we know and what we can do to swiftly secure the release of the two vessels – a British-flagged vessel and a Liberian-flagged vessel.

“Their crews comprise a range of nationalities, but we understand there are no British citizens on board either ship.

“Our Ambassador in Tehran is in contact with the Iranian Ministry of Foreign Affairs to resolve the situation and we are working closely with international partners.

“These seizures are unacceptable. It is essential that freedom of navigation is maintained and that all ships can move safely and freely in the region.”

A Government source said the crews on board the two ships are “a range of nationalities” but no Britons are among the crews of either ship.

A Conta meeting due to start at 10.30 tonight will be chaired by either Jeremy Hunt or David Lidington.

This boy no know where e for come believe me,

Shame on you, have you not seen the educated Esan, well, I won't blame you because you are an outcast.

Ohanlen-tobvian, I really want to see this stupid disgusting Esan boy. Your dream of coming to Europe is so narrow.

What is your business go and sit down

You can't even speak good English, that shows your ability. Pls brother stop selling your brother.

Na even esan guy e be self, e dey e tongue 😝, u are a disgrace 2 esan land as a whole

He's making sense out of Nonsense,...so don't Hate him and reason with him....

That is Tony Momoh, you can see the hausa mark on his face.. ...another Etsakos, slave, whose loyalty is to the Caliphate .... Majority of his tribe, do not care about the progress and Advancement of Edo nation.... All they are after is to enslave, their slavery propagation , for continual existence of their hausa/ fulani slave master.whose interest, comes FIRST, and Edo advancement comes second.... He Tony Momoh, said That "Governor Obaseki Incumbency, will be balance with Federal might".... This is what an Etsako man, a "bAuchi" man is saying,......to Organic Edos, ........ Etsakos, what a shame...... All they are depending on is Army, Civil defence, police, Prisons, man O war, immigration and maybe custom... But should know that Edo is not Kogi, nor Lagos, neither is Edo state IMO STATE. ... See MoreSee Less

Let them come. And Oshomole should not forget that it was the Edo people that fought for him when his mandate was stolen in 2007. If we can do it then with the little knowledge we had in politics, governance and economy.. Na that we know better we will do greater things in their eyes, I will not be surprised if the so much anticipated revolution in Nigeria started from Benin/ Edo state.

Rattling of an inconsequential being, is Etsakor people not part of Edo state? That's our identity as Etsakor tribe. We are in support of POl period.

They are a threat to Edo nation

Mr poster we are all one , everyone is entitled to his or her opinion. The truth is that obaseki will win but but in democracy others also have right to contest in an election. That is my view. Make we nor fight ourselves for their matter

Must you castigate personality to achieve your political interest

You abuse and insult the Etsako, the Afemai, fellow Esans, the Yoruba et al who will vote pdp in Edo now?

... Oluwole Yewande... Just look at your disjointed comments.... Esan, Benins And the Owans, are Edo nation Vote and progress... Edo has won, with PDP all the way. .. Etsako are just inconsequential 14% vote... Etsakos and you yorubas, in slavery, should go to sokoto and vote for your slave master at the Caliphate .... Nonsense.

Politicians shld not divid us all,they are just greedy and wicked pple.whatever u can do 2 claim ur true mandate,do it.

Edo state is for all,not 4 few politicians,if edo pple can do it 4 oshiomole 2 be gov.They can also do iI 4 some1 else.

The Good people of Edo state should ignore Tony Momoh