ALEXANDRIA, Egypt, July 6 (Reuters) – Nigeria ousted holders and bitter rivals Cameroon from the Africa Cup of Nations as they scored twice in three minutes to come from behind and win a thrilling last-16 match 3-2 on Saturday.

Odion Ighalo gave Nigeria a 19th-minute lead but Cameroon hit back with two goals in quick succession before halftime from Stephane Bahoken and Clinton Njie to take a 2-1 lead.

Ighalo levelled again for Nigeria in the 63rd minute amid suspicions of offside before Alex Iwobi snatched the winner for the jubilant Super Eagles three minutes later.

The win earned Nigeria a quarter-final against hosts Egypt or South Africa who were meeting later on Saturday. 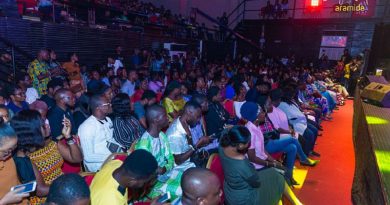 As at today, the APC Governors not with Oshiomhole are in minority. He has the full support of the majority.
#fact
JAS ... See MoreSee Less

They certainly do not have a choice! Party supremacy must be respected. Any one found wanting, will be disciplined.

Pls look for something doing

And so, what is your point?

U are day dreaming

The dog that is destined to get lost listens not to his Master's whistle!

If the devil is a lair,why do we give it/him too much credit?

Notice to those of us that understand ESAN LANGUAGE.... HAPPY VIEWING.... ... See MoreSee Less

Amen and also with you brotherly

Amen and Amen you too brother

Amen you are wonderful

My Sunday Advice: If u want to be a slave, no problem but if your master sends you to deliver bad message, use sense deliver it. Do not accumulate more enemies for yourself than friends because of your blind followership or slavery. ... See MoreSee Less

“Uncut Gems” celebrates Manhattan’s Diamond District, a neighborhood that’s a window into the past