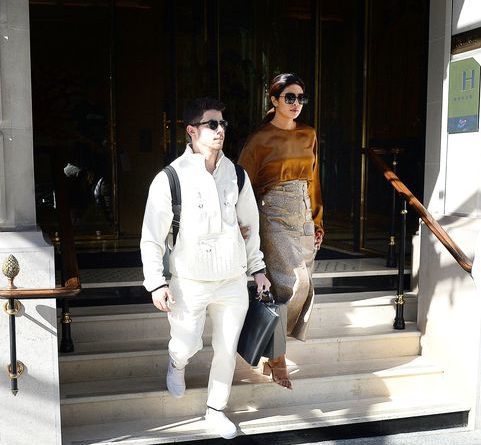 Nick Jonas and Priyanka Chopra are taking advantage of their time in Paris. On Thursday the couple went for a stroll in the city of love, looking the part for Paris Couture Week. Chopra wore a silky brown top with a long leather skirt while Jonas opted for an all-white look (with the exception of the black bags he was carrying).

The couple were in France originally for Joe Jonas’s wedding to Sophie Turner in Provence last weekend. They’ve since extended their stay, making appearances during fashion week, sitting front row at the Dior show. Chopra shared a photo of her and Jonas posing with designer Maria Grazia Chiuri, with Jonas standing slightly awkwardly with his hand on his torso.

“That’s my cool guy pose,” he commented. “Only two steps required…first put your hand on your torso awkwardly. Second, make sure your posture is super weird.”

Chopra recently spoke about having two new sisters in her life since joining the Jonas family. In an interview with Elle U.K., she shared her excitement about having the women as sister-in-laws.

“I’ve never had a sister, so it’s really nice to have Danielle and Sophie, and just inheriting the family by proxy,” she said. “Sophie is super talented, super funny and we have the most fun when we go out together. She’s incredible. By the time this comes out, she’ll be the new Mrs Jonas – I can’t wait for her to join the family.” 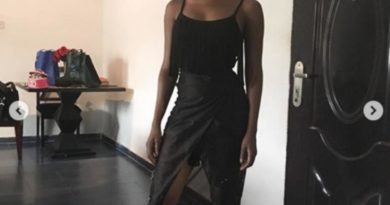 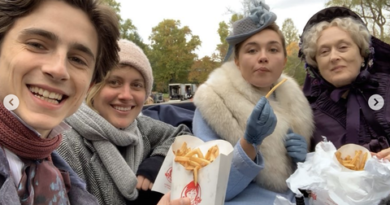 ONLY FOR THE MATURED MINDS. It just happened in UROMI! A man was bathing at a bathroom. . Suddenly, a child of 4 years ran to meet him there and cried biterlly for help. The man left the bathroom and ran after the son that beated up the victim, unfortunately. he fell to the ground. The elders were invited and pronounced a goat with 29,000 naira. Are they right? ... See MoreSee Less

Is it for leaving the bathroom?

They are not right.

ITS THE CUSTOM OF THE LAND

Who was fined?The foolish man that ran out of the bathroom half-naked or the boy that ran into the bathroom while his father was bathing?Or the person who ran for his life when he saw who looked like a mad man pursuing him? My brother, don't paint Uromi in dull colours.That town is the habitat of great and intelligent people.

No! They are evil & hungry elders. The man should have comforted the child & later on inviting the older one that beat up the child to know his reasons.

Back in the days

The main measure who a man was in Esan in time past.

Beware of fulani herdsman with this publicity

Aru, through out the year no buying of yam in the market

This is called Eru.

Yes it is call eru

This was a reason for polygamy in the days of yore

EMPOWERMENT OPPORTUNITY..for every interested Person....Available is a GREAT INCOME_YIELDING Full time or part time Work, its a big but Reputable American international company which is now within your reach! ( DO YOU KNOW THAT PROBLEMS TO BE SOLVED ARE) Un-employment which is a major problem in Nigeria involvement of not less than 50 million people most of whom are youths Making the people's future uncertain Un-employment condition which will be worse tomorrow... (TO CHANGE YOUR LIFE FOR BETTER FOR THIS YEAR 2020) ...This EMPOWERMENT OPPORTUNITY... could be added to the one in your hand. NOTE:wealthy people looks for an opportunity to work with team why every one else looks for Job.. More information...DM.or WhatsApp or call this number 07010709141..

Our fore fathers got high tech.

This is when men, were men indeed

Did you drank water from this deep freezer that year???? ... See MoreSee Less

That is the best drinking bow I have ever seen. Always cold

No I didn't drink from the pot because we also have like this.

@ Akpasubi Your English is wrong..Better say "Did you drink water from.... "And not Did you drank...Two past tense shd not follow each other.. Thks

English not be our language

Akpasubi, not did you drank but did you drink? Cos the did has already shown that is in the past

Even last week I drank from it.

Yes so my people

PDP governors are the problem of PDP. They are selfish,corrupt, over ambitious& shameless. Aside Wike & 1 or 2, some of them lobby the cabal to travel out with Buhari,to be on his good books.-Timi Frank ... See MoreSee Less

Ralph, it is not just the Governors alone, the worst are some of the so called Senators and Honourables. They are dishonest and hypocritical, very soon they will be disgraced.

In a working society or country where democracy is about the people, opposition is not at all time design to be enemies to the ruling party, we take a clue from united state of America, not every time opposition throw stones at each other as in the case of Nigeria. They can travel with president and still disagree with him on policies and issues as it affect the ordinary citizen.

“Uncut Gems” celebrates Manhattan’s Diamond District, a neighborhood that’s a window into the past