The 2020 presidential race is in full swing, and there’s a mind-boggling number of Democratic primary candidates vying for the party’s official spot. Luckily for voters, the first debates are also coming up soon. Here, everything you need to know.

When is the first debate?

The first Democratic primary debate will take place over June 26 and June 27 in Miami, Florida, with lineups for each night chosen at random. Both will begin at 9 P.M. EST and will take place at the Adrienne Arsht Center. NBC News, MSNBC, and Telemundo will be hosting those debates, and NBC News recently announced that the moderators will be Savannah Guthrie, Lester Holt, Chuck Todd, Rachel Maddow and José Diaz-Balart.

How can I watch it?

According to NBC, the June debates will be streaming online for free on NBCNews.com, MSNBC.com, the NBC News app, and Telemundo’s digital platforms.

Not necessarily. The Democratic National Committee has announced that candidates have two paths to qualifying for the first and second debates:

And after the first two debates, things get even trickier. To qualify for the third and fourth debates, which will take place in September and October, candidates will need to meet two requirements:

So, who has qualified so far?

But it is possible that more candidates could end up qualifying in time for the debates. 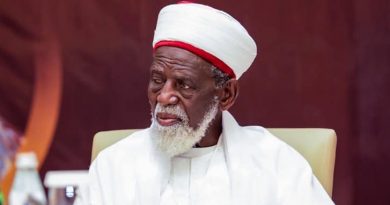 I said this before now, that Akeredolu has put his house in order to get his second term immediately he succeeded to win over the factional chairman to withdraw his court case, whether direct or indirect in ondo Akeredolu will pick the ticket. ... See MoreSee Less

An All Progressives Congress (APC) socio-political group in Ondo State, the Unity Mandate Agenda, has kicked against the reported endorsement of..
View on Facebook
·Share

Yahala Bello and Akeredolu played the game better than Obaseki.

We know oshiomole divid and rule game,his the one dividing Edo,so, said it, the way it is. 1)WHO is the supreme leader of EPM 2)WHO house the 14 legislatures in abuja 3)Send thug to fight the oba of Lagos and the governor in his house. 4)How brought ize iyamu to contest against the governor. Answer the above questions, than you will know why,we are fighting each other in Edo

I don't know how some guys reason thinking that one man is super powerful . Well , we are watching the movie to see the end

Bro , you can never compare and Edo state with Ondo , our people have their self pride they always want to maintain...