A political pressure group, Ebonyi Women Vanguard (EWV), an umbrella body of Ebonyi women in politics and professionals has appealed to President Muhammadu Buhari to appoint women from the state into his new cabinet.

The National President of the group, Mrs Immaculata Ibe, made the demand in a statement in Abakaliki on Saturday ahead of presentation of lists of nominees for federal cabinet members to the soon to be inaugurated 9th Senate.

The body which comprised also Ebonyi women entrepreneurs as well as Ebonyi women resident outside Nigeria, decried long period of exclusion of Ebonyi women in Federal Government ministerial and other federal executive appointments.

She said: “Our appeal to Mr President for inclusion of at least a woman from Ebonyi extraction into his up-coming cabinet is predicated on the long period of neglect and marginalisation suffered by Ebonyi women under successive administrations.

“While other states in the South-East zone have produced, at various times women who were appointed into the federal cabinet and other executive positions, no Ebonyi woman has enjoyed this privilege since the creation of Ebonyi in 1996.

“We have remained marginalised, neglected and excluded in spite of the robust contributions of Ebonyi women in Nigerian politics and national development.

“For 20 years running, successive administrations in the country have neglected Ebonyi women from appointment into major Federal establishments.

“EWV considers it as unfair and against the spirit of equity, fairness and good conscience in the distribution of political appointments in the country.”

The group noted that Ebonyi paraded some of the most illustrious women that Nigeria could offer, who had contributed tremendously in the socio-economic and political emancipation of Nigeria.

It added that a woman, Mrs Ann Agom-Eze, made solid contributions and indeed mobilised the different segments of women and youths for the second term re-election of Buhari in the last presidential election.

The group also said that Agom-Eze dared and contested senatorial position on the platform of the All Progressive Congress (APC) in the last general elections, a position that had remained the exclusive preserve of the men.

EWV noted that women in other South-East states had fair representation in major federal appointive positions and argued that the alienation of Ebonyi women deserved a legitimate concern.

“A checklist of federal appointments of women from Abia, Anambra, Enugu, and Imo states into federal establishments reveals a stark illustration of how Ebonyi women have been marginalised since the advent of democracy in 1999.

“In Imo State, Mrs Viola Onwuliri and Mrs Kema Chikwe served as ministers at various times, while in Enugu state, Mrs Fidelia Njeze and Mrs Alison-Madueke were appointed ministers of Aviation and petroleum.

“Mrs Chinwe Obaji, a former Minister of Education was also from Enugu state,” she said.

The group regretted that in spite of the avalanche of stockpile of intellectual amazons that abound in the state,  no woman had been considered for ‘juicy’ federal appointment.

“Mr President, our appeal is predicated on the reality on ground of how our women who have the experience, capacity, intellectual accomplishments, and proven track-record of achievements in divers areas of human endeavour remained unfairly treated”.

The group, therefore, urged Buhari to translate his ‘Next Level’ agenda into resolving the injustice meted out to women in Ebonyi by setting aside at least one ministerial slot in favour of an Ebonyi woman when his new cabinet is constituted.

LAGOS EXPLOSION: Apart from five dead, we also lost over N2bn worth of properties — Catholic Church 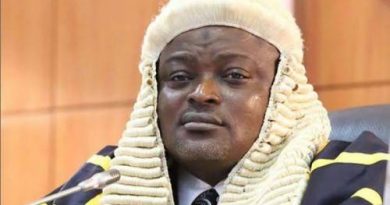 #ObasaGate: The Leaders Of Tommorow Have Been Scammed By Adeyeye Olorunfemi

A day later the same Hope Uzordima was appointed to head the committee to screen the aspirants of Edo APC before primary.

I just pray my mouth should not put me for trouble. ... See MoreSee Less

E don already put the guy for trouble,I actually tot Obaseki had a plan B in his Arsenal's to fight Oshiomole...As e dey be so emmmm the matter go hard to settle

Aslem has the registered numbers of delegates so no issue

No worry, my people PDP go settle the matter..

This month of June your enemies will not be comfortable, for God has blessed and lifted you up above your contemporary in Jesus mighty name Amen. Happy New month/ stay safe!! ... See MoreSee Less