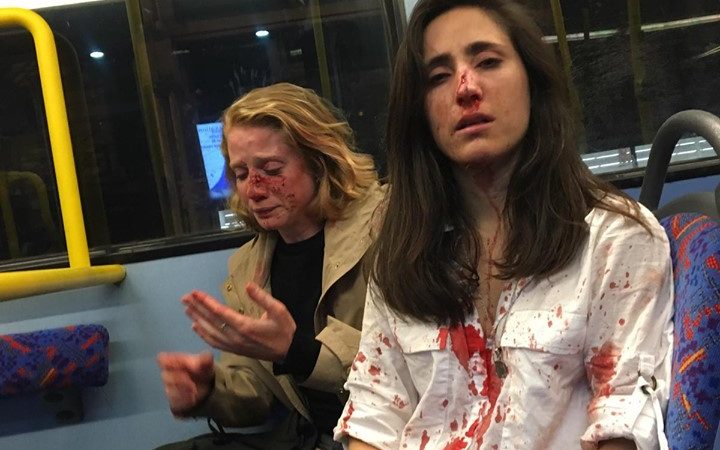 A female couple were battered by a gang of four men after they refused to kiss “for their entertainment” on a London night bus.

Arrests were made on Friday afternoon in relation to the attack, Scotland Yard said, after they put out a call for witnesses.

Melania Geymonat, 28, and her girlfriend Chris had been on a date in the capital last Wednesday and were heading home on the top deck of the bus when the men started abusing them.

When they refused to kiss at the demand of the gang, they were viciously attacked. They were also later robbed of a phone and a handbag.

Prime Minister Theresa May has condemned the assault. She said: “This was a sickening attack and my thoughts are with the couple affected.

“Nobody should ever have to hide who they are or who they love and we must work together to eradicate unacceptable violence towards the LGBT community.”

In a post on Facebook, Ms Geymonat – who worked recently as a Ryanair air hostess and is originally from Uruguay – said: “I’m tired of being taken as a sexual object, of finding out that these situations are usual, of gay friends who were beaten up just because.

“We have to endure verbal harassment and chauvinist, misogynistic and homophobic violence because when you stand up for yourself s— like this happens.

“By the way, I am thankful to all the women and men in my life that understand that having balls means something completely different.

” I just hope that in June, Pride Month, stuff like this can be spoken out loudly so they stop happening.”

Describing how the attack unfolded, she wrote: “Last Wednesday, I had a date with Chris. We got on the night bus, heading for her place in Camden Town, climbed upstairs and took the front seats.

“We must have kissed or something because these guys came after us. I don’t remember if they were already there or if they got on after us. There were at least four of them.

“They started behaving like hooligans, demanding that we kissed so they could enjoy watching, calling us ‘lesbians’ and describing sexual positions. I don’t remember the whole episode, but the word ‘scissors’ stuck in my mind.

“It was only them and us there. In an attempt to calm things down, I started making jokes. I thought this might make” them go away.

“Chris even pretended she was sick, but they kept on harassing us, throwing us coins and becoming more enthusiastic about it.

“The next thing I know is that Chris is in the middle of the bus fighting with them. On an impulse, I went over there only to find her face bleeding and three of them beating her up.

“The next thing I know is I’m being punched. I got dizzy at the sight of my blood and fell back. I don’t remember whether or not I lost consciousness.

“Suddenly the bus had stopped, the police were there and I was bleeding all over. Our stuff was stolen as well.

“I don’t know yet if my nose is broken, and I haven’t been able to go back to work, but what upsets me the most is that violence has become a common thing, that sometimes it’s necessary to see a woman bleeding after having been punched to feel some kind of impact.”

She is still waiting to find out if her nose is broken, and is off work due to the attack.

London Mayor Mr Khan is among those to have expressed his anger at the attack, and he tweeted: “This was a disgusting, misogynistic attack. Hate crimes against LGBT+ people will not be tolerated in London. The Metropolitan Police are investigating. If you have any information about this call 101 to report it.”

Horrified to see this homophobic attack against two women simply trying to enjoy a night out in West Hampstead. There can be no excuses, no space, for such obscene behaviour. My full solidarity is with these women and the UK’s LGBT community.https://t.co/ViajxDdERd

The MP for the constituency in which the attack occurred, Tulip Siddiq, tweeted: “Horrified to see this homophobic attack against two women simply trying to enjoy a night out in West Hampstead. There can be no excuses, no space, for such obscene behaviour. My full solidarity is with these women and the UK’s LGBT community.”

Defence Secretary Penny Mordaunt added: “Appalled to see this kind of homophobic violence in the U.K., there’s no place for this kind of vile behaviour in our society. Please contact @MetCC if you have any information.”

In a statement, Scotland Yard said: “Police are appealing for witnesses and information after two women were assaulted and robbed in a homophobic attack on a bus in Camden.

“The incident happened at approximately 02:30hrs on Thursday, 30 May after the two women, both aged in their 20s, boarded a N31 bus in West Hampstead.

“As they sat on the top deck they were approached by a group of four males who began to make lewd and homophobic comments to them. The women were then attacked and punched several times before the males ran off the bus. A phone and bag were stolen during the assault.

“Both women were taken to hospital for treatment to facial injuries.”

More down half of Nigeria politicians are Devil...

Ize iyamu is not ambitious. He is desperate. Desperadoes dont rule well.

Ize iyamu is a desperate man, we should be ware of a desperado.

Ambition is bye product if willingness.

I am member of APC-Ize-Iyamu ... See MoreSee Less

Criminal Iyamu, you were in government to enrich your self. Oshiomole already made us to know who you are.

I see him heavily struggling in pains of hunger, Edo money will never be entrusted in your hand, Amen

The end shall tell.

Is it the Governor to fund Police which is a Federal government agency? Very unwise reference.

Please pastor, go and pastor well. All you are saying here is rubbish

The Desperation is Just 2 Much..

NO OBASEKI,NO APC IN EDO ALL YOU SAID SHOW TO US THAT YOU NEVER CHANGE FROM WHAT OSHIO SAID ABOUT 2016, AND FOR THIS REASON I WILL ADVISE YOU KEEP THE LITTLE YOU HAVE TO SAVE YOUR SECRET.

Fake Pastor Ize iyamu he is just wasting his time

Fake pastor A. K. A political ashawo go and continue your family system

For ordinary form many went with you. What of if you win the seat? You are already telling Edo people how you are going to mismanaged our funds to carry on your prestigious ways. This is what Obaseki don't allows sharing public funds for luxurious purposes. You are saying oshiomole single handedly brought Obaseki before and told everyone you are a thief. For you to clear the air, You should sue oshiomole for disinformation of character. Just don't tell people you don't have the knowledge of this claims that oshiomole had damaged your real identity. Sue him for damages

He cannot be our Governor, that is my State also.

Just reading comments. From what I have read, Devil is going nowhere

I hear all what Ize-Iyanmu said, but you see it's only a fool that will believe whatever a politician says in Nigeria! Accusing Obaseki of not doing what he promised is like telling a child if he stops crying u will buy him candy and u never buy it. I actually like Obaseki and i want him to continue. 200000 jobs and #2b investment plan that he hasn't done was becos it was what Oshiomole and apc in Edo told him to say(lies) everywhere. He refused to share money everyone ones to remove him by all means. From General Charles(retired) to Send.Obu standing with Iyamu,they do so becos he has promised them money and contracts if he wins. I heard Kabaka complaining in a video of how he stopped them from collecting revenue from traders and buses etc. Now they are all broke. When light comes darkness tries everything to block it from shinning. Even a so called (pastor) which I am ashamed off has chosen to be part of d darkness by all means! I ask myself did God ask him to become a governor by all means or who told him to? What a broken society we live in.. Nobody wants to stand for truth! Same mistake was made in 2015 for the presidency. Now same wants to be made by Edo state citizens. I stand with #obaseki 4more years!

How can a pastor contesting for any political post did you want to tell us you have not drink human blood? And you call your self a man of God please go back and face your pastor work

This Man don"t know anything He is fake pastor

U have b wasting money buying ticket since decade now so u stil hav enough to wast . Monkey

Which Esan and how many of una dey orchestrate that one?

I rejected it in totality

You have no mandate to speak for Esan land. Speak for yourself alone.

Who be day for where? E no get for here make e try bini

Show us his projects in esan land.

Wetin he don do for Esan people?, because he put Okiye for speaker. Make he win first,the next day he go drop Okiye fast fast

Obaseki is the Anwer

Ize iyamu have so many people to settle