The Coalition of United Political Parties (CUPP), has rejected Femi Gbajabiamila as the next speaker of the House of Representative over alleged conviction by a United States court in Georgia.

Imo Ugochinyere, CUPP spokesman, and 12 other national chairmen of political parties said this on Tuesday while addressing journalists in Abuja.

Ugochinyere asserted that the federal lawmaker is not competent to be the speaker of the House of Representatives because he had earlier been convicted of  “willful dishonesty” by the Supreme Court of the State of Georgia in the United States.

Although he said the CUPP was not interested in who the lawmakers decide to lead them, Ugochinyere pointed out that Gbajabiamila’s choice was “morally, politically and constitutionally wrong.”

He said the CUPP, through the Action Peoples Party, had commenced criminal proceedings against the lawmaker before Grade 1 Area Court of the Federal Capital Territory sitting in Karshi.

He explained that the case was instituted because Gbajabiamila had at different times given false information on oath to the Independent National Electoral Commission (INEC) when he claimed in the commission’s Form CF001 that he had never been indicted by a tribunal, court or administrative panel of fraud or dishonesty.

He said, “A court in the FCT has issued criminal summons on Femi Gbajabiamila to appear in person on June 10 and the court also granted an exparte application to serve him by substituted means through the clerk of the national assembly.”

Ugochinyere also said the CUPP backed the use of secret ballot system to elect the leadership of the Ninth National Assembly.

He said the secret ballot was the only way to allow lawmakers vote for their leaders according to their conscience.

When contacted on the telephone for his reaction, Gbajabiamila’s spokesman, Olanrewaju Smart, said the majority leader’s camp would react on Wednesday (today).

The ruling All Progressives Congress (APC) had named Gbajabiamila its preferred candidate for the position.

The Kaduna State Governor, Nasir El-Rufai, had also described the majority leader as the choice of President Muhammadu Buhari and not that of the party’s national leader, Asiwaju Bola Tinubu.

But the spokesman for the CUPP, told journalists in Abuja that Gbajabiamila’s choice was contrary to the present administration’s acclaimed anti-corruption war. 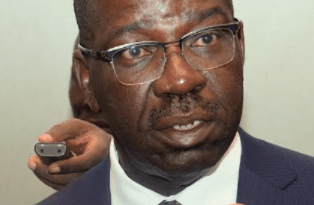 In Case You Missed It: There’s Nothing Buhari Asks That I’ll Not Approve, Says Senate President