The second day Muhammadu Buhari was sworn-in for second term as president of a country with economy “stuck like a stranded truck,” with unemployment at 23%, with inflation at 11%, with 94 million people living on less than $1.90 a day, more than in any other country, with unprecedented violence, kidnappings, and killings by Fulani herdsmen terrorists, Baba Go Slow jets out to Saudi Arabia to attend the meeting of Organization of Islamic Countries (OIC). What a wrong way to start a second term!

Buhari’s poor performance in the elections didn’t give him any victory to celebrate. Out of the 200 million Nigerians, 8% voted. Buhari won 56% of the ballots cast, only 15.2 million of the 29 million registered voters backed him. According to Washington based Brookings Institution, Nigeria now has 87 million extremely poor people more than any other nation. World Data Lab predicts that by 2030 a quarter of the very poor people will be Nigerian.

Buhari’s first term reveals that he is a president in rebellion against his office and the social contract between government and citizens. Buhari has not in any way presented himself as a leader with far-reaching ideas. He is not equipped to look past the politics of the moment. Since Buhari took office, the economy has become stunted, the country remains dangerously fractured, divided, and coming apart. Buhari will be remembered for his incompetence to master basis governance rules of engagement.

Nigerians expect the president to cry with them when they cry and console them in times of tragedy. With all the killings and violence and kidnappings perpetrated by his kinsmen Fulani herdsmen terrorists, President Buhari behaves unseriously, insensitively, and unsympathetically. As president, Buhari suffers from incompetence and impertinence. Buhari campaigned for second term with no specificity as to what he would do other than repeatedly regurgitating the nebulous and meaningless empty slogan “Next Level.”

Though Buhari’s supporters claim he is a “man of integrity,” he has failed to show exemplary moral leadership. Buhari is a profile of amorality from the way he responds to national crises that call for presidential initiative and action. With dystopian analogies swirling all over the country, the president remains aloof and distant.

Given President Buhari’s first term “reign of terror,” Nigerians should expect four years of horror as the “Next Level.” Nigerians, fasten your belts and pray for your souls. After all, he’s the “experienced” president you badly wanted. You dare not complain. Here’s what the next level where Buhari is taking you will look like:

Nigerians will come under greater and grievous assault in every way imaginable. Freedom of press will be abridged. Freedom of movement will come to a screeching halt due to kidnappers, armed robbers, and Fulani herdsmen terrorists. More value will be placed on cows than on the lives of Nigerians. Buhari’s next level will be a beautiful metaphor for the hollowness at the core of Nigerian will. Buhari will extinguish the light of our democracy. Redundant and ragtag economic policies and programs will sink Nigerians deeper into the abyss of poverty. Buhari’s failure of will and imagination will magnify and multiply.

In Buhari’s next level, we will need no fictional George Orwell to tell us Nigeria is rotten at its core. Reason: Truth is much scarier than fiction. Nigeria will be soaked in proven shocking statistics and personal stories of horror. The horror will be so much that evil will overtake the whole country considering the horrors that our people will contend with on a daily basis. It’s going to be a case of leadership gone bad. Greed and graft will increase to a height never seen before with an explosion of treachery and wickedness in all areas of Nigerian society. As I write, the horror movie is unfolding in Nigeria. The days are evil. The perilous times are here with us.

Nigerians, you’re stuck in horror for the next four years with a sailor who can’t steer a ship that isn’t moving forward. The sailor doesn’t understand what to do. He doesn’t understand that to change direction, he must first have to create forward progress. This is it! You got what you asked for. You ain’t seeing nothing yet. The worst is yet to come! 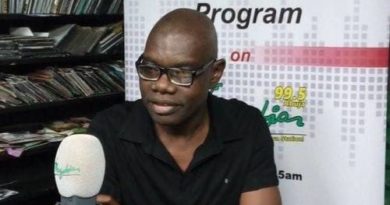