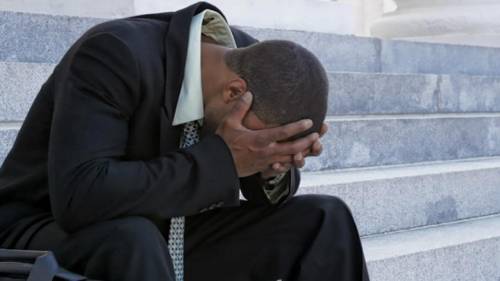 In the past, Nigerians were said to be resilient, but the case is different now. The World Health Organization in 2017 declared that globally, about 300million people are depressed; and In Nigeria, about 7.8million people are said to be suffering from depression, with about 1.5million cases yearly, and that is about 3.9% of Nigerians population. This earned Nigeria the title of “the most depressed country in Africa.”

It is a mental health problem that is marked by persistent low mood, loss of interest in activities previously enjoyed to the point that marked impairments are noticed in the daily activities; that is, functioning in the physical, psychological, social, marital, etc aspect of the person’s life are affected.

Clinical depression isn’t the same as occasional periods of feeling down or mood fluctuations, hence, here are some differences.

The symptoms in clinical depression persists for two or more weeks, while that of mood fluctions is short lived.

Symptoms in clinical depression are often severe, while that of mood fluctuations are often not severe.

Clinical depression interfere with various aspect of human life, while a person with mood fluctuations has the ability to live life normally, without interference and can still function at various capacities.

The cause of clinical depression may be unknown, while mood fluctuations may have a definite cause eg, death of a partner, unemployment, abuse, separation and divorce e.t.c.

Note: Though mood fluctuations have specific causes if poorly managed and symptoms persist for more than two weeks, clinical depression is imminent.

Anybody can develop depression, but it is common among:

Women – Women develop depression twice as often as men. One reason may be the various changes in hormone levels that women experience. For example, depression is common during pregnancy and menopause, as well as after giving birth, suffering a miscarriage, or having a hysterectomy — these are all times when women experience huge fluctuations in hormones.

The exact cause of depression is unknown, but lots of risk factors can be linked with its development and they are:

1. Chemical imbalance in the brain: low level of amines such as serotonin, dopamine can lead to development of depressive symptoms.

4. Major life event: sucj as death of a loved one, unemployment/loss of job, imprisonment.

5. Substance use disorders: alcohol and drug addiction. About 30% of substance users suffer from depression.

Types of depression (based on severity)

Mild : this type of depression has few symptoms, and the symptoms result in only minor functional impairment.

Moderate : symptoms or functional impairment are between ‘mild’ and ‘severe’

Severe :  this type has lots of symptoms, and the symptoms markedly interfere with functioning; it can occur with or without psychotic symptoms, and suicidal tendencies.

1. Persistent depressive disorder : it is a major depression, but symptoms are less severe, but they last up to two years.

2. Post partum depression : symptoms of major depression appears during pregnancy or after delivery.

3. Psychotic depression : a major depression with psychotic symptoms such as delusion and hallucinations.

5. Bipolar Affective Disorder : a two pole illness with a period of normalcy. At a time, there may be symptoms of mania(direct opposite of depression), and another time, there are depressive symptoms.

Disruptive mood dysregulation : this is common in children and adolescents

Premenstrual dysphoric disorder : common in females just before the commencement of their monthly menstrual flow.

Note: more than three of these symptoms indicates a high probability of a major depression; though further assessment is needed.

No matter the severity or form, depression must be treated by the mental health team. Treatment ranges from

2. Antidepressants: these are drugs used to treat depression.

3. Electroconvulsive therapy: this is an electrical treatment.

If a specific cause is identified, it must be treated, like thyroid problems.

Prevention of depression and other mental health problems

Talk about your feelings with someone you trust and who can help you e.g, your parents, spouse, pastor.

Eat a balanced and proper diet in a timely manner.

Rest and sleep: learn to take a break before you break down. 7-8 hours of sleep at night, and 1-2 hours during the day.

Keep in touch with friends and family: call only when necessary, don’t replace visiting and verbal communication with calls and text messages.

Do something you are good at engage in pleasurable activities.

Accept who you are: never compare yourself with others.

Ask for help when the need arise.

Care for others: give support and guidance, and be empathetic.

Get a routine mental health check-up every 6months to 1year.

1.When a person talks regularly about dying or wanting to die.

2. Talking about feeling empty, hopeless or having no reason to live.

4. Having a feeling of guilt or shame

5. Talking about being trapped or having no solution to problems.

6. Talking about being a burden to others.

7. Withdrawing from friends and family.

8. Taking risk that can lead to death – reckless driving etc

9. Talking about death all the time.

11. Saying goodbye to friends and family – verbally or writing a suicide note.

12. Putting affairs in order or making a will.