Vice President  Yemi Osinbajo has visited Bauchi state to amidst rising insecurity in the state.

The visit co-incides with a dusk to dawn curfew imposed on four communities located on the outskirts of Bauchi metropolis following breach of the peace in those areas.

A statement signed by Muhammad Nadada-Umar, Secretary to the State Government (SSG) said that the curfew, from 6 p.m. to 6 a.m., would remain in force till further notice.

Narrating what led to the imposition of the curfew, the SSG said on Thursday, May 9, 2019, at about 9.00 a.m., some youth in the affected areas had a misunderstanding among themselves,  which subsequently turned to violent clashes between some residents of Gudum Sayawa and Gudum Hausawa Communities. 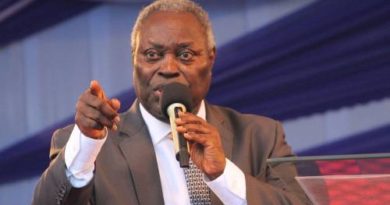 In your dreams not real life

For you to become a governor in apc, I will vote pdp.

He is no longer a thief? Oshiomhole is the architect of the crisis in Edo apc

Let him go and face his church

Do you want me to release the video of the champagne against you by Oshomole some years back? Mr Ize Iyamu don't make people to believe you that you are a pastor

Won't these public thieves ever for once be ashame, enough is a enough, in the name of Jesus we are standing to resist you, Amen

Running, running and run away!!!

Major General Buhari and his dumb handlers, open their lying mouths and expose how delusional they are.

Mr Adesina argued that compared to the Goodluck Jonathan government, "where bombs were going off 10 times a day", the situation has improved.
View on Facebook
·Share

Why is this fool from a proustite mother not in the war front to stop the killing? You are insulting the President of your country like this, because you are using a fake name on Facebook. Should Buhari go to the war front himself? You and your father if you have any, should go to be war front, instead of the President. Animal.

But what I don't understand is the fact that people are still blindly supporting these murderers call APC.

KADUNA-ABUJA ROAD WAS VERY SAFE IN 2015

This man most be mad

My earnest prayer is that the next person that will be kidnappers will have in their den will be related Femi Adesina and they will not negotiate with him but rather wast the life, so that this man will know what is happening in this country

This man is the most foolish man on Earth

I feel ur talk