Through the darkness of Game of Thrones‘ Battle of Winterfell, viewers spotted an unexpected beauty moment: the Night King’s nails. In between Twitter chatter about Arya Stark’s triumphant killing and mourning Lyanna Mormont, fans observed that the Night King—terrifying as he is—has a pretty great manicure.

During his very slow, dramatic walk toward his target, Bran Stark, the camera zoomed in on his hands:

That length! That perfect almond shape! You mean to tell me he battles and flies dragons with these talons?

Jokes aside, this just goes to show how attentive to detail the Game of Thrones special effects team is—down to the hands. The creators have previously revealed that it takes actor Vladimir Furdik up to four hour and a half hours in makeup to be transformed into the Night King. They use airbrush paint and silicone pieces to make him look chilling—and makeup artists stay on set for up to 11 hours constantly doing touch-ups. No word on exactly how he gets his nails, but we’re placing our bets on gel extensions.

Learn more about the intense prosthetics process in the video, below. 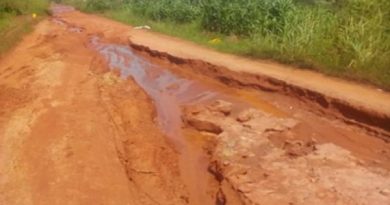 Republicans must lie to survive: They have no other choice

Obaseki has warned Oshiomhole,..... And his lion and Tigers , that any further disturbance in Edo state,,. by any means,.... He will chase Oshiomhole completely Out of Edo state.... And as well when he resumes Office for second term, He will confiscate, the fraudulent Edo University Iyamu, from Oshiomhole,.... That it is Edo state property , and never Oshiomhole's private University , as such, he will dissolve the University and convert the institution into Edo state ministry of Agriculture. ... See MoreSee Less

All 26 FRSC operatives kidnapped have regained their freedom — Gov Sule