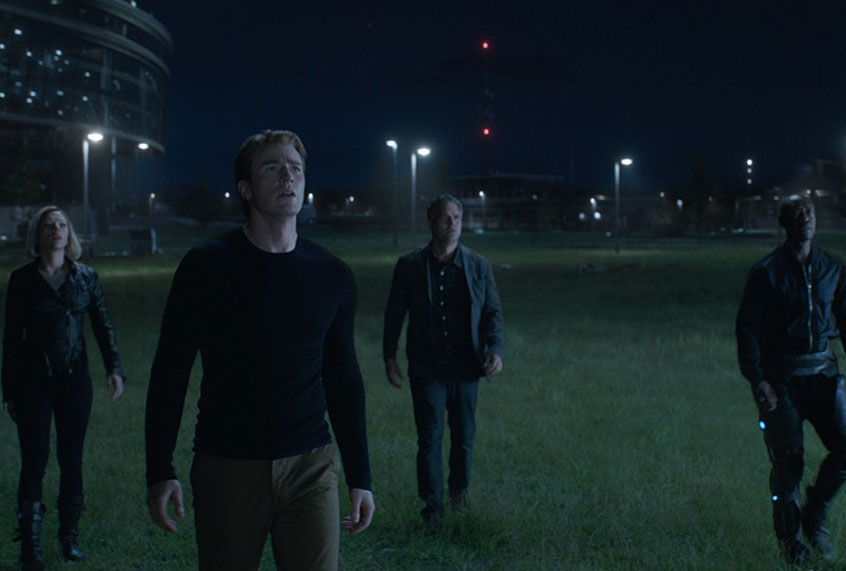 “Avengers: Endgame” is clearly a labor of love, and a great deal of fun to watch. Despite its serious flaws, the film is carefully crafted to offer a wealth of emotionally satisfying moments for fans of the 21 previous films in the Marvel Cinematic Universe — in particular, the older franchises of “Iron Man,” “Captain America,” “Thor” and “The Incredible Hulk” (with quite a bit of a newer franchise, “Ant-Man,” referenced for good measure). As someone who counts four MCU movies as among his personal all-time favorites (“Captain America: The Winter Soldier,” “Captain America: Civil War,” “Thor: Ragnarok” and “Black Panther”), I appreciated the sincerity that directors Anthony and Joe Russo and screenwriters Christopher Markus and Stephen McFeely brought to the table. Far too many Hollywood blockbusters are made with cynicism, which cannot be said of “Avengers: Endgame.”

But the problem with “Avengers: Endgame” is the plot holes. Lots and lots and lots of plot holes — so many that they’re distracting.

First a few words about the plot itself. Picking up where “Avengers: Infinity War” left off, “Avengers: Endgame” is the story of how a handful of superheroes try to bring trillions of living creatures back from the dead after a genocidal tyrant named Thanos (Josh Brolin) murdered them in order to restore balance to the universe (for more on Thanos’ ideology, check out the work of Thomas Malthus and apply it on a galactic scale). The key heroes are Iron Man/Tony Stark (Robert Downey Jr.), Captain America/Steve Rogers (Chris Evans), The Incredible Hulk/Bruce Banner (Mark Ruffalo), Black Widow/Natasha Romanoff (Scarlett Johansson), Hawkeye/Clint Barton (Jeremy Renner), Rocket Raccoon (Bradley Cooper) and Nebula (Karen Gillan). Everyone is solid in their respective roles, with standout performances by Paul Rudd as Ant-Man/Scott Lang and Chris Hemsworth as Thor, both of whom hit comedic high points for their respective characters. Captain Marvel/Carol Danvers (Brie Larson), despite being prominently featured in the advertising, is given very little to do here aside from one spectacular moment near the end.

To say more beyond this about the plot specifics would require delving into spoilers, which I dare not do. Some general observations about its strengths and weaknesses, however, can paint an accurate picture.

The two biggest strengths of “Avengers: Endgame” are its increased focus on character development and, consequently, its ability to deliver catharsis for fans of the aforementioned characters. One of the biggest flaws of “Avengers: Infinity War” is that it juggled so many different characters that no one received adequate attention; although the movie had a few moments that really resonated (Iron Man clutching Tom Holland’s Spider-Man/Peter Parker while the latter died still chokes me up), for the most part its massive cast received short shrift. In a similar vein, the tone was all over the place, with the film often unable to decide if it wanted to be light-hearted like a “Guardians of the Galaxy” feature or more serious like a “Captain America” film. The end result, as I wrote at the time, was a film that felt like movie loaf.

“Avengers: Endgame” does not have that problem. Thanks to Thanos’ iconic finger snap, the story here has a sharp focus that “Infinity War” lacked — everything is about regaining the stones and reversing the genocide. Similarly, because this is set in a post-genocidal universe, the tone is consistently bleak for most of the running time, with audiences seeing the greatest heroes in the world cope with the most unbearable burden imaginable — namely, that of having failed. While it’s normal for superhero movies to show their characters dealing with dark situations or being tormented by inner demons, this is a story about failure in its most abject and horrifying sense. There are horror movies and political dramas with premises less nightmarish than the one in “Avengers: Endgame,” and if the superheroes can’t erase that nightmare, it raises questions about whether they’re really heroes at all. This is an interesting approach for a superhero film to take.

Thanos’ finger snap did this movie another favor by whittling the cast down to a manageable level. Not coincidentally, this includes all of the old school Avengers. As a result audiences are allowed to dive into the minds and souls of Iron Man, Captain America, Thor, The Incredible Hulk, Black Widow and Hawkeye as they engage in the closing acts of their respective narratives in the Marvel Cinematic Universe (Ant-Man is also given a lot of attention here). There are plenty of poignant moments for each of them, and the movie completes each arc with an attention to detail — both those in this film and in the other movies where they appeared — that speaks to the genuine love felt by the filmmakers. While many Marvel movies feel like advertisements for future films, this one is full of thoughtful callbacks to previous installments designed to elicit strong emotions from fans.

Yet that is also where the movie runs into its chief flaw. In its determination to make sure that each of the core original Avengers has as many cathartic moments as possible, the creators of “Avengers: Endgame” built a narrative that feels cobbled together, poorly in parts, and doesn’t hold up to scrutiny even while the film is being viewed for the first time. (I imagine repeat viewings will only worsen the problem.) Time travel is a key plot device here, and it is difficult enough to write a time travel movie that makes complete sense. “Avengers: Endgame” doesn’t even seem to be trying. A number of plot developments and character choices create paradoxes and internal inconsistencies or raise unanswered questions about how events in this movie may or may not have altered those in the previous 21 films. The attempted scientific explanations for time travel come across as sub-“Star Trek” level gobbledygook and, frustratingly, the movie sometimes breaks its own pre-established rules.

Time travel isn’t the only part of “Endgame” that doesn’t make sense. Some of the character resolutions are actually downright unsatisfying. One hero’s arc ends with a decision that is meant to seem romantic and moving but comes across as uncharacteristically shortsighted and selfish. Another makes a sacrifice that, while probably necessary, seems to shortchange that character’s journey up to this point rather than endowing it with meaning. Of course, another character’s sacrifice is absolutely pitch perfect, and another character is able to add a poignant twist to an otherwise comical storyline by referencing a plot thread from one of the least-popular Marvel movies. That’s the thing about trying to tie up so many disparate storylines in one movie: Chances are high you’ll wind up whiffing a few even if you stick the landing with others. That is certainly the case here.

The end result is a movie that left me with an uneven feeling about its quality. If you’re a fan of the Marvel franchises that are prominently featured here, you will find much to enjoy. For those seeking a fun, visually pleasing action-adventure flick, “Avengers: Endgame” will not disappoint. (Despite its three-hour running time, it moves at a fast pace and barely feels longer than an hour-and-a-half). Yet I suspect those who are not already enamored with the Marvel Cinematic Universe will feel this is one of the weaker installments because its plot leaks like a sieve. “Avengers: Endgame” is great as far as milestone events in our cultural history are concerned, but as a movie it falls short of greatness due to sloppy execution.