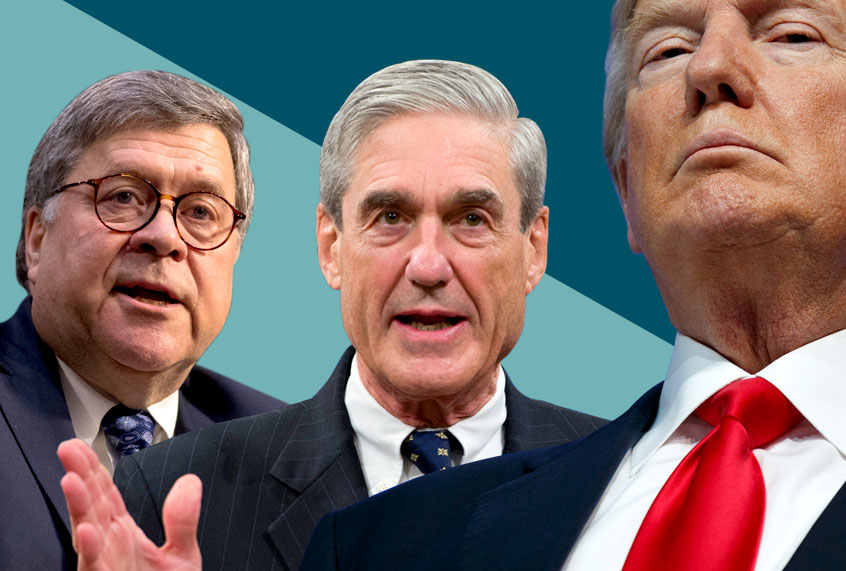 After a year and a half of building expectations, the event we’ve all been waiting for is (almost) here. Twitter is ablaze with competing hashtags, recappers are ready to both summarize and offer commentary, and a rapt audience to the spectacle has only one question: Will this change everything? Then, inevitably, comes the letdown: The event was so built up in people’s heads that no matter how extraordinary it actually turned out to be, folks found themselves asking, “Is that all?”

No, I don’t mean the season premiere of “Game of Thrones,” which was great. I’m obviously talking about the Mueller report, which will allegedly be released on Thursday to great media fanfare, and almost inevitably by a dawning realization that this will change nothing. Donald Trump will not be impeached, much less removed from office. The only way to end this long national nightmare is to elect a Democrat to the presidency in 2020.

First of all, there’s simply no reason to think that whatever Attorney General Bill Barr tries to pass off as the “Mueller report” will be any such thing. We’ve been down this road already, last month when a much-ballyhooed “Mueller report” turned out instead to be a four-page memo, penned by Barr, that seemed more focused on concealing rather than elucidating the information uncovered by special counsel Robert Mueller during his investigation into the Trump campaign’s possible ties to a Russian conspiracy to interfere with the 2016 election.

In what was ostensibly a hearing about Department of Justice budgetary concerns earlier this month, Democrats on the House Appropriations Committee repeatedly questioned Barr’s assertion of broad rights to redact information from the Mueller report before it was released. At one point, Rep. Ed Case, D-Hawaii, held up a memo from the Mueller investigation that was almost entirely blacked out before it was released to the public.

Considering that Barr was hired after sending an unsolicited memo to the Justice Department outlining his opposition to the very existence of the Mueller investigation, there’s every reason to share Democrats’ concerns that Barr will be generous with the black ink on a report about an investigation that has already resulted in 37 parties facing criminal charges, along with seven convictions.

But even if Barr proves the skeptics wrong and releases a genuinely informative report, it’s unlikely to lead to Trump’s removal from office. Even in the unlikely case that Mueller has photos of Russian president Vladimir Putin blackmailing Trump with the rumored pee tape, Trump is staying put until January 20, 2021. At least.

No matter how often it’s been debunked, the idea still floats around in the anti-Trump resistance that, as happened with Watergate, we finally reach a breaking point where the impeachment and removal of the president becomes inevitable. Because of the mystery around it, the Mueller report has become the holy grail of this particular quest, imagined to be stuffed full of evidence of impeachable offenses by Trump that will be the catalyst that fuels the impeachment fire.

This, however, is completely wrong. The reason Trump isn’t getting impeached has nothing to do with a lack of impeachable offenses. There was a cornucopia of legally justifiable reasons to impeach Trump the first day he set foot in office. He’s on tape confessing to sexual assault. His fake “university” was a fraudulent organization that bilked American citizens of enormous sums, sometimes their life savings. His supposed charitable foundation was also fraudulent and quite likely used to bribe a law enforcement official. His family’s fortune was built largely through tax fraud.

That Trump was a crook was known before he took office. Since then, he’s continue to behave in ways that constitute legal grounds for impeachment. Just last week, it was reported that Trump has demanded that government officials break the law and, in one reported case, dangled the promise of a pardon as an incentive to then-Border Patrol head Kevin McAleenan. He uses his Twitter account to foment violence against political opponents and journalists. He’s clearly violating his promise not to run his businesses from the White House. People seeking to curry favor with him blatantly use his hotel and Florida resort as a channel to direct bribes right into his pocket.

As for the two main questions people have about the Mueller report — did Trump conspire with Russian agents, and did he obstruct justice? — there’s enough in the public sphere to legally justify an impeachment. Trump basically admitted to Lester Holt at NBC that he fired James Comey as FBI director in an effort to obstruct justice. And in a move that smells strongly of conspiracy, Trump told Russian officials, in the Oval Office, that firing Comey would prevent an investigation. He also publicly bullied former Attorney General Jeff Sessions out of his job, reportedly angry that Sessions wouldn’t do more to interfere with the Mueller investigation. He’s also publicly threatened witnesses against him.

All of this is reason enough to impeach and convict Trump, from a legal standpoint, without any Mueller report ever seeing the light of day. The reason House Democrats haven’t moved to do so is simple enough: They know the Republican-controlled Senate won’t convict Trump. If Republicans refuse to convict Trump after all the already blatant corruption on display, there’s almost nothing, short of murder (and possibly not even that), that will move them now.

In a lot of ways, the build-up around the Mueller report has benefited Trump, even as he whines publicly in the most guilty-sounding fashion imaginable about the fact that the investigation even existed in the first place. The more the public and the media have focused on the Mueller report as the linchpin in the case against Trump, the less focus there was on Trump’s already lengthy public rap sheet.

In a sense, we’re all like Dorothy from “The Wizard of Oz,” going on a long and arduous journey when the answer was at our feet the entire time. If all it took was enough evidence to declare that Donald Trump is a criminal, all we needed to do is click our heels three times and recite “‘Access Hollywood’ tape, witness intimidation, tax fraud, Trump University, charity fraud, political bribes, incitement to commit crimes, firing James Comey.”

But unfortunately, we need more than that. We need to convince a whole bunch of Republicans who will accept no level of evidence, no matter what. That problem will still be with us, no matter how many Mueller reports we get.

Four Democrats in Zuckerberg hearing own Facebook stock: Not illegal, but clear conflict

No brake, no gear, no sense - Zombie ... See MoreSee Less

Nigeria’s Debt Management Office (DMO) has said the country will borrow N1.549 trillion from domestic and international markets to fund its 2020 budget. Director-General of the office, Patience Onih...
View on Facebook
·Share

What do you expect from termite certificate inspector.

We have reached the time light.

The North is trying every way to cripple Nigeria in preparation for eventual break up. They want to sink Nigeria in debt. Unfortunately that's coming from very shallow minds.

I so much hate this administration

May his soul rest in perfect peace in Jesus name

May his soul Rest In Peace