A humanist meeting organized on Tuesday, April 9, 2019, happened at a very short notice and brought out the best in Lagos. One of the council members of the Humanist Association of Ghana (HAG) was visiting and the event was to welcome her. So it was planned as a meet-up, an evening get-together. A talk on Pant Money Rituals and Superstition was added to spice the meeting and give attendees a common theme for discussion, something to talk about apart from Jollof rice!

With the combined efforts of the Atheist Society of Nigeria (ASN) and Humanist Association of Nigeria (HAN) media teams, the event was announced and circulated online. The online publicity happened few days to the event. On the Facebook pages of the ASN and HAN, the post had a few likes and three to five people confirmed attendance. When contacted, the organisers said that they were expecting about ten persons. Given the short notice, that was a good number for an evening with our humanist friend from Ghana.

Again it was a working day and then the traffic in Lagos could be challenging. All these would make it difficult for some to attend.

I can recall one person stating that she could attend if she was able to close early from work and another saying that he would try and beat the traffic by coming early into Lagos Island.

I traveled to the event from Ibadan and luckily arrived the venue, the national stadium at Onikan, by 5 pm, that was an hour earlier. Not too long after my arrival, the coordinators from the ASN and HAN joined.  Soon few more persons arrived. By the time we started there were about fifteen persons. I overheard some people calling the organisers and indicating that they were on their way. In fact a humanist colleague from Calabar who was in Lagos for another event could not make it to the meeting due to traffic. The talk on Pant Rituals was well received and occasionally people chuckled at the bizarre thoughts and actions of persons who engaged in money rituals.

The humanist colleague from Ghana spoke on the situation of humanism in her country, the challenges that humanists faced and the progress that they had recorded. Like Nigeria, Ghana is one of the most religious nations in the world and non religious persons are in the minority. There was a very vibrant questions and comment session. In all, there were four main categories of comments. In the first category, we had the first timer comments. Some persons expressed delight in physically meeting for the first time atheists, humanists and freethinkers. In fact one person said that he came purposely to see what atheists looked like and to know what atheists do whenever they meet.

In the second category, there were comments that the humanist/atheist movement was not active enough given the religious devastation of the society. One person was visibly frustrated at the slow pace of action and intervention by humanists. He suggested that the humanists and atheists should stage a campaign to counter religious indoctrination in the society. In fact, he noted that the situation had reached a point that he would like to be handing out flyers on the streets with bold inscriptions such as: JESUS IS NOT COMING SOON. There were further suggestions to counter religious indoctrination in families, in schools, and to explore ways of undoing the damage that had been done by the local movie industry, the Nollywood.

In the third category of comments, people urged caution in challenging religious brainwashing in the society and in the promotion of critical thinking. One of the participants urged that children be exposed to all the options – religious and non religious- while growing up. Another attendee pointed out that promoting critical thinking would be difficult especially in many parts of Northern Nigeria where, according to her, people were not encouraged to think. Others drew attention to the risks and challenges that could go with campaigns to promote critical thinking and secular values including the risks of ostracisation, persecution and loss of jobs and businesses.

In the fourth category were suggestions and propositions on what could be done to address the challenges including the involvement of humanists in humanitarian and emergency services in the country. One participant said that humanist volunteers should have been on ground when the building collapsed in Lagos and suggested that atheists and humanists in the state should be meeting more often. In the same vein, a participant announced another meeting to further explore strategies of strengthening organized humanism in Lagos.

At the end of the event, the number of attendees far exceeded the expectation. The organisers said 27 people were at the meeting. In fact as we were leaving the venue, somebody arrived for the event. He said he was delayed by the traffic. With a population of over 6 million persons drawn from different parts of the country, there are huge prospects and possibilities for humanism in Lagos. The nation’s former capital is keeping humanist hopes alive. 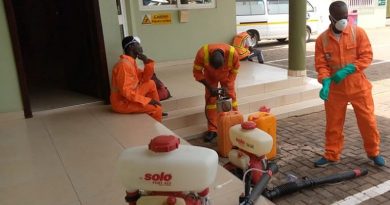 Former Senatorial candidate and leader of All Progressives Congress APC in Edo Central Senatorial district of Edo State, Chief Francis Inegbeniki, has insisted that Pastor Osagie Ize-Iyamu, remains the chosen and consensus governorship aspirant of the party ahead of the September 19 governorship election in Edo State.

Inegbeniki, who is the APC Senatorial leader in Edo central, in a statement yesterday in Benin, said the people of Edo State, would experience the next level agenda of APC and good governance when Pastor Osagie Ize-Iyamu assume office as Governor of Edo State.

He explained that other APC aspirants who had earlier endorsed Ize-Iyamu, but have picked nomination forms was for strategic reasons, afterall any of the other aspirants are qualified to govern Edo state.

Inegbeniki said, ''Let me sincerely commend the APC National Working Committee NWC for adopting the direct primary in Edo State, which has provided the opportunity to all card-carrying members of APC in Edo state to participate in the selection of their choice APC Governorship candidate. More so, I am very optimistic that APC will win the forthcoming governorship election in Edo state''.

POI we believe in u.

Only in Edo state will thieves be regrouping to loot again and the youths whose future is being stolen will be celebrating it..."That name POI implies to looting public fund.

#JusticeForUwaThis is Uwa Omozuwa, A 22 year old young lady who just gained admission into the University Of Benin. While she was studying inside a Redeem Church along Ikpoba Hill in Benin she was attacked, raped and left for dead!!

We at #isell26com will not take this inhumane act and so we are demanding for Justice, the perpetuators must be brought to book.

Please join us as we protest peacefully and demand justice.

We are pleading with all the good and powerful people of Edo State and beyond to please take this matter up, justice must be served.

Hmmm may her beautiful soul rest in peace AMEN

How do you protest against someone you don't know, is there any cctv futage or has anyone come out to confess to the crime, or is there any witness. Nigeria don't have data base so you can't trace the attacker with the dna on the semen, the matter is complicated.

In Edo state political crisis, who should we blame? ... See MoreSee Less

Osho is the problem

Na you the people of edo state should be blame. U dey ask me why abi?

Oshiomhole and his greedy friends

Oshiomole and his greedy people

Why is Oshiomole synonymous with trouble and crisis always ?

Blame d people but same people can amend it & put a stop 2 all this nonesence.Edo is not 4 1 man,is 4 all.so uote wisely

Oshiomole is the cause of everything, Na him bring obaseki Na him condem ize-iyamu, na him say NO godfatherizm Na him still dey want godfatherizm, na him still get issue with obaseki when he bring, same him become ize-iyamu friend. So where are will?

Any one who is playing godfather position

I blame EDO YOUTHS because they choose to follow the same people who made many of them jobless, YOUTHS who are not ready to be the leaders of tomorrow