It was in 2008, at a debate with Ademola Adesola at the famous English department lobby where Journalism and debates are cross fertilized and pasted, that I first heard about the fiery progressive scholar, Pius Adesanmi. Ademola had referred to Pius as the kind of radical intellectual he preferred as against extremists (obviously referring to my jagamu kind of raging writings which was the thing Left liberals hold against revolutionaries.)

I was already wary of the diasporanic writers due to the neo-liberal ideas which was creeping into especially literary and economic writings through the postmodernist school. Many a writer from the diaspora get so blamist and comparative that they mostly downplay the real struggles.

Growth is hyped above development.

And when at Isaac John in Ikeja GRA, Blakson was driving out one tall handsome smiling man, Femi Adeyeye pointed; “that’s Pius Adesanmi!” He immediately asked to greet us. He could miss the flight but couldn’t  but wait to snap with “those guys in struggle to change our country!”

And we snapped together.

But since I started reading Pius Adesanmi, I fell in love with his satirical and class-conscious perspectives. One of his articles, BOYS BEHAVING BADLY remains my best.

Adesanmi relayed how he took his poor driver to a “capitalist” restaurant to eat and had to get a table-for-two which looked odd to the capitalists and their mulatto sisis. He ordered same food for himself and the driver and also ate so uncivilizedly as the driver. This angered the other la crème eating in a “posh” way. While he left the expensive bar, the driver told him of how most of those capitalists never pay their drivers while they consume #8,000 worth of dish at a sitting.

Genius Payo in that short voyaging article tells a story that explains the major problems in our country-class. The rich is getting richer and hates the poor. This is unlike many writers who help the rich to lie around that ethnic or language is our differences. Some have just used such propaganda to win elections all around the country, yet we only have the rich and the poor as the two extremes all over.

PAYO VS SUGAR: BETWEEN GOOD  NAME AND PLENTY COWRIES

As I mesmerize with the tiny buttons on my phone to read many tweets and posts on other social media pages of many a youth who have just vigorously worked for the same enemies that put the country into “50 years of underdevelopment” are trending numerous tributaries in pictures, videos, and marble words for our departed radical intellectual who devoted his adult life fighting same ruling class: questions of whether this wonder wonder go end almost dampened my spirit.

But something then came calling. The crises that is heating Oyo as a fall out of the killing of Hon Temitope Sugar, the Member of House of Representatives who was shot in the eye last Saturday. While he is a young big politician who even contested for the Senate, his story of being a violent thug of the ruling class who have been forayed into politics after years of antidemocratic assignments for the Ogas at the top makes the public sympathy so short lived.

But Payo on the other hand was also killed violently via air crash yet has the mass sympathy of millions of working people. Youths must have a take away from this. What do we want to be remembered for?

Sugar would be in the same age range with Payo. But both chose a different life. We all now could clamour for a national tribute to Pius Adesanmi because he used his intellect and bravery to stand with the masses and fan the embers of real change. But only a few would vote to put Hon Temitope Sugar’s name into the national hall of fame.

ETHIOPIAN AIRWAYS: THE BEST IS A DIRGE?
Many really wondered that the Ethiopian Airways, one of the best in the world could have such a fatal crash. The truth being that the maker of the new plane Boeing 707 is a global disaster. This is why some have been defending the Ethiopian Airways and making sure the Nigerian rulings class which has kept the national aircraft a big disaster so far with many crashes and archaic airports.

The model of the Ethiopian Airways that abhors privatisation but put its national fleets into total government control but independent management has been a model for the whole Africa. This is unlike Nigeria where the privatisation policy has destroyed the air transport system and the national aircraft has been in shambles just like power, agriculture and other sectors. Biodun Ogunade, the late trade unionist had written recommending the Ethiopian model. This is still valid. The Ethiopian Airways is still a better model in terms of policy, but with this tragedy, we must learn further. We must be in charge of what is produced to fulfil a deeper result with the inherent failure in capitalism globally as a result of the excessive list for profit. The making of the world class tragic Boeing 707 is profit-laden. A socialist society in a planned economy would have nipped this in the bud. For production is at the centre point. We cannot rely on these infrastructures made solely for profit to lead a regulated and accident-free economy. We have to produce. We have to industrialize.

AN EPITAPH OF FLYING TO REST IN POWER

Pius Adesanmi had in 2003 written what his epitaph should be. That he played his own part in trying to savage this poverty capital of the world. He would have peace with his pen as spear. But this system has a grave for us all.

He cared more about the poor. He used his pen to fight their oppression. And he employed his wits to tell their stories.

Pius Adesanmi also never wrote for the oppressors. Unlike many social media influencers who have turned to the pipers of the rich, Payo maintained his modesty and principles. He used his brevity to call out against the oppressors and never spare them in the umbrella and broom divides. This is unlike many writers and poets who are eating in either or both of the big pots of bourgeois soups. Payo used his social media to support people’s trends and not the “next level” of mass poverty or the “working again” of embedded prodigals and jagabanistic looters.

Adesanmi is an example the youths should follow. Payo has flown off to no return. But he is resting on in power knowing he has played his part in fighting for another world which is very possible. He dedicated his pen to writing about what had gone wrong and how we can all unite and take it back.

Tise and her mother should please wipe the tears and be assured that our beloved Payo (beloved father and hubby), no matter the tragic blows, has flown; smiling as usual, to rest in power! 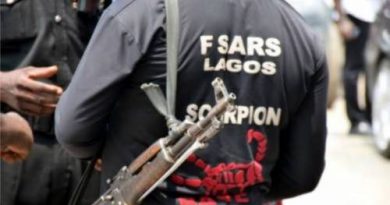 Show us the whole street now, na begining you show we no see the end of the street, the good road behinde show us that one now also, stop decieving people my brother the truth is that Obaseki is better option for now.

The idiot nor even sabi speak English. Ode.

This guy also be like thief, he need to be arrested

Useless Chris.... this was the same way he campaigned against POI....

Fruitless youths , idiot which one your father do.

Before you go to bed tonight let me prophesy in your life, Good news will wake you up tomorrow. I dont know how it will happen but I know that someone here will wake up with new SMS of favour, a CALL of favour, and a knock of congratulations.
Take it in Jesus name 🙏🙏 ... See MoreSee Less

I receive it in Jesus name amen

Listen to article Member of Parliament for Gomoa Central, Hon. Naana Eyiah last Friday cut the sod for the construction

My approval for auction of seized vessels legal, Malami insists